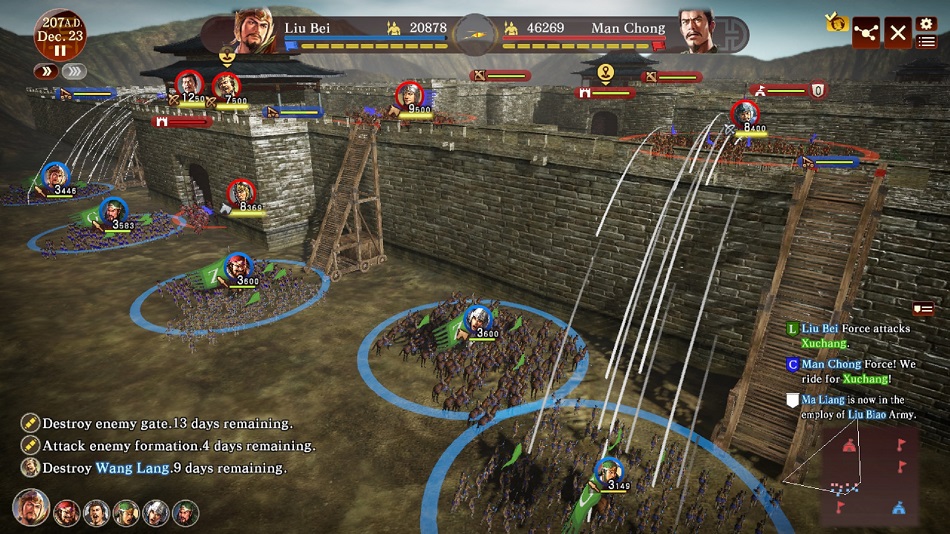 WTF Buying two 700 year-old, 750 page novels to better grasp what the hell all of this is about.

I’m a person who takes videogames fairly seriously. I’ve been playing for around 25 years, and i pride myself on having varied taste. So, it’s not every day that someone like me runs into a franchise with at least thirteen entries and a thirty-year history that they have absolutely zero experience with. Like many, my initial thought about the long-running Romance Of The Three Kingdoms series was that it was some sort of Dynasty Warriors title, since it’s made by the same guys and they tend to make games that play a lot like Dynasty Warriors. However,  if the setting and the outlandish characters characters were removed,  ROTK is probably the most un-DW game in existence.

So why the sudden interest in a seemingly impenetrable series? I’m coming at this review with a slightly more personal slant to it, as life currently has me teaching English at a primary school in Luoyang, Henan Province, China. Luoyang is one of China’s four ancient capitals, and it plays an integral part in the story that the original historical novels were based on. The books are also possibly the most read non-religious text in history, so playing a game to possibly learn something and better connect with my friends, colleagues, and the city around me made taking on Romance Of The Three Kingdoms XIII quite intriguing.

It’s been out for about a year on the PS4 and PC, and it recently received the boringly-named Fame And Strategy expansion pack. The Xbox platform has never exactly been a hotbed for Japanese niche strategy titles, but Tecmo Koei decided to bundle it all together so that Microsoft’s boxes could finally experience feudal China in all its number-crunching glory.

To give a brief description of what this game is, exactly, and how it plays would be… nearly impossible. There’s a lot going on, and even with a twelve hour tutorial, players may still be overwhelmed. It would take ages to fully detail every single system at play here, so I’m not even going to try.

The meat of the game is selecting an avatar and working to rule all of civilized China. There’s much more to it, however. After choosing one of over seven hundred characters, the scenario itself can be modified heavily. The time period, strength of each faction, and even things like if the player character can die of old age or not can be set individually. The sheer vastness of the options means that any player who ends up digging this game will have near infinite replay value ahead of them.

The chosen character falls into two groups: Generals feature a traditional strategy role with full control over the kingdom and being in charge of that whole take-over-China thing. For those who wanna try something a little different, there’s also an advisory role where suggestions are made to the general. Gain favor due to (hopefully) sound advice, and rise up the ranks in hopes of becoming a governor.

The best aspect of this latest entry in the series is that it represents the best possible time for newcomers in the form of Hero Mode. Added to the traditional main campaign are a series of short scenarios designed to teach the player everything there is to know about playing Romance. These range from rebuilding the destroyed city of Luoyang while learning how to properly cultivate a thriving culture (as well as building an army) to thwarting an emperor’s rule by manipulating a love triangle, hence teaching the player how to coerce relationships and properly spy on enemies. 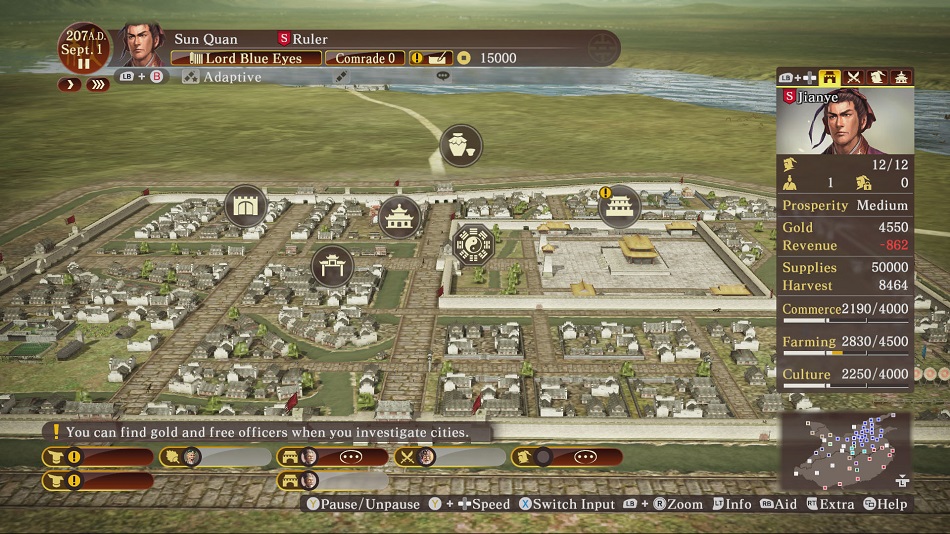 This mode also does a great job of introducing the player to various rock-paper-scissors themed mini-games involving everything from horseback combat to spirited debates on important local political grievances (For real. It’s kinda amazing). The player’s chances of winning these games are increased by an individual character’s rating in things like military prowess or communication skills. it may be difficult to defeat the legendary warrior Lu Bu in combat, but talking circles around him in the palace could prove just as effective.

Lo Kuan-chung’s seminal historical fiction series is a daunting undertaking, but ROTKXIII does a good job introducing players to it without buying 1,500 pages worth of paperback (like I did). It hits the major beats of the story in hero mode while portraying the motivations of the houses of Wei, Shu, and Wu to an audience who may have no idea who any of these people are. Numbers heavy strategy games like this usually don’t focus on their production, but ROTK‘s lavishly produced setting and score does an amazing job of transporting players into Feudal China circa 220AD.

The new expansion also adds a side-story to the hero mode, which could best be described as fan fiction, and serves to introduce the new gameplay wrinkles. With Fame And Strategy, the player’s deeds spread throughout the land with a fame ranking which influences how other characters in the world interact with them. Random events like the occasional natural disaster have also been added to spice things up, but the randomness of these portions may put off players who meticulously plan everything.

The story and interactions are told through still images of the characters speaking to each other, which I usually find bothersome, but thanks to the absolutely incredible character artwork from Hiroyuki Suwahara and little touches like subtle breathing animations, they spring to life. The game also features dual audio for voice tracks, but not the kind one may expect –the options are Japanese and Mandarin. Trust me, go for the Chinese. The voice actors really get into it, particularly in the confident/menacing heavy laugh category.

The graphics from a technical level are…understandable… given the scope of what’s going on, sans for the fairly egregious slowdown that happens constantly. There are a lot of numbers being processed under the hood, so they probably didn’t have the power available for extra polygons, but I wish it was a little more colorful in-game, especially when compared to the vibrant hand-drawn artwork used throughout. The two don’t juxtapose well considering the varying levels of browns and greens used in the overworld. Also, zooming all the way in on combatants as they do battle may result in a slight chuckle — they resemble poorly-animating sticks flailing their way to victory.

The fact that it works as well as it does on a controller is quite admirable, but it’s also clear that a mouse & keyboard would be the preferred option, as there are just too many options and submenus on-screen at once. Add in multiple characters, and it can be difficult to highlight the right one without zooming in, given the general impreciseness of using an analog stick as a cursor. There’s also a lot of ‘press X and then toggle with X to do X’, and the screen can be completely cluttered with various commands.

If what I’ve described sounds appealing, prospective rulers can expect to pay a whopping $69.99 for this bundle on Xbox, but I can confidently state that this is, without question, the most complex console game I have ever played and there is absolutely nothing else like it on the system. That alone makes it noteworthy, and potentially worth a look for anyone wanting to try something new. Romance Of The Three Kingdoms XIII is a deep, highly rewarding strategy title that insists on persistence, patience, and a high commitment. I’m unable to speak on behalf of ROTK die-hards, but as someone who came in completely bereft of knowledge of the franchise, this thirteenth entry does a solid job to bring in new players, which, considering how damn intricate it can be, is commendable. Rating: 7.5 out of 10

Disclosures: This game is developed and published by Koei Tecmo.  It is currently available on the PS4, Xbox One, and PC. This copy of the game was obtained via publisher and reviewed on the Xbox One. Approximately 20 hours of play were devoted to the single-player mode. The Hero Mode was completed along with extra time spent in the main mode. There are no multiplayer options

Parents: According to the ESRB, this game is rated E10+ and contains Violence, Mild Language, and Use of Alcohol.  This is a historical simulation game in which players assume the role of a ruler uniting the kingdoms of ancient China. Players manage economic/domestic affairs and engage in military campaigns against neighboring kingdoms. Combat is usually depicted from an overhead perspective, with players deploying military units (e.g., small armies of soldiers, cavalry) on a battlefield. Slashing effects and cries of pain can be heard during battles. Players can also zoom-in on battles, and engage in brief mini-games of one-on-one combat with generals. The game contains some alcohol references in the dialogue (e.g., “A man should sing the praises of his wine” and “When drunk he would whip his men.”). The word “bastard” appears in dialogue.

Deaf & Hard of Hearing Gamers: Subtitles are available, and there are no necessary audio cues. As an extremely text-heavy game, players with hearing issues should have no problems.

Remappable Controls: This game’s controls have two presets to choose from, but they are not fully remappable.

Hi Jarrod, does it have chinese sub on Xbox version ?

How does it compare to Nobunaga’s Ambition?

I can’t speak directly to that as I’ve never played it, but my understanding is that Nobunaga’s Ambition is an attempt to make a ROTK style game in Feudal Japan, so they probably compare well to each other, but some gameplay concepts may differ. Hope that helps!

Fantastic review Jarrod, I was completely sold on the game.

The Dynasty Warriors series led me to reading the fan-translated ‘Romance of the Three Kingdoms’ and I have yearned for a game like this to come out on a console that I owned for a long time.

Couple of almost unrelated questions:
– How are you coping with game support in China? South East Asia is notoriously rubbish when it comes to Xbox One
– Have you watched the John Woo film, Red Cliff? It serves as a precursor to Romance of the Three Kingdoms and is worth a look

Hey Badger, Jarrod here. Gaming in China is a breeze if you have access to a DNS server. Also I’ve never actually seen an XBox One in the wild in either China or Japan. I ordered a US version of the system that I bought on Taobao (China’s Amazon.com), and there’s plenty of sellers for top up cards and imported games so keeping up to date is a little more complicated, but probably easier than you think it is. Also, never seen Red Cliffs. I watched a few episodes of what my friends recommended as the best TV show based… Read more »

Hi Jarrod, I’m concidering buy it from Xbox store. Just wondering does it has Chinese subtitle in the language setting ? Cheers