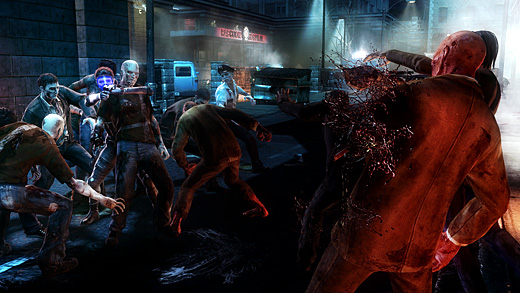 HIGH Seeing the Raccoon Police station rendered in gorgeous HD for the first time ever.

LOW Firing a full clip of assault rounds into a hunter as it yawns indifferently.

While Capcom is no stranger to turning out sequels to successful franchises, it's less common for them to offer an installment that's wildly divergent from the source material. However, that's exactly the case with Resident Evil: Operation Raccoon City

While still a part of the massively popular Resident Evil (RE) series, this title takes an all-new approach and flips the premise: instead of being a heroic member of S.T.A.R.S. taking down zombies and saving the day, players are put in the role of the Umbrella Secret Service's Delta squad—black ops enforcers doing dirty work behind the scenes. Even more unusual? It's a four-person multiplayer experience focusing squarely on team-based shooting.

In the spirit of the game's multiplayer design, RE series vets Dan Weissenberger and Brad Gallaway deliver this multi-writer review…

Brad: To be honest, I was really looking forward to this title. Although RE hasn't necessarily gone down the path I might have chosen, the franchise still has tons of potential—the core games are fine, but there are plenty of ways this rich IP can still be explored. Hearing that Capcom was going in a new direction was exciting, and doubly so since I've wanted to play Umbrella again ever since the Hunk mission way back in RE2.

Besides the switch from good to evil, the other promising thing was the change from controlling a lone hero (or two) to being part of a powerful assault squad with firepower to spare and no time for keys shaped like chess pieces. This sort of paradigm shift appeared to offer a totally different perspective on the classic RE formula, so Raccoon City should've been right up my alley.

Dan: If anything, I was even more excited than you were, Brad. As a RE superfan, I was down for a new title the moment it was announced. Learning that it was going to take place during RE2—the series' arguable high point—just sealed the deal.

Beyond the nostalgic appeal, I couldn't help but trust the brand reputation that RE has built up over the past sixteen years. Yes, there have been missteps (largely involving cruise ships, for some reason), but the RE name generally implies a level of sureness in design and the kind of bonus material that marks every title as a purchase, and not a rental. 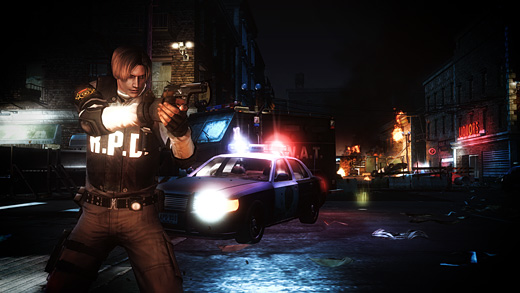 Brad: I'll be the first to admit that I'm not a huge fan of online multiplayer, although I do enjoy campaign-based co-op. In that respect, I think Raccoon City has a few things to offer. For starters, I'm glad to get more Umbrella. I admit it—as a long-time RE fan, this tickles me. Also, playing through the story was vaguely enjoyable since we could reminisce about our histories with the franchise thanks to the numerous callouts throughout the game.

On the other hand, people who haven't been playing as long as we have will find the central plot lacking since it's tied so closely to a game released on a different platform fourteen years and two generations ago. You and I had no problem figuring out what was going on, but most of the campaign will be nonsense to those who don't have first-hand memories of when Leon, Ada, William and Sherry were originally introduced.

Capcom could have gotten around Raccoon City existing solely as a piece of fanservice if they had done more to give the playable characters more personality or depth. While the USS members all look fairly tough and cool in their shiny S&M gear, there's not much substance for newcomers to attach to.

Dan: If this game worked just as fanservice, then at least we'd have some basis for recommending it. Sadly, it even fails at that simple goal. The areas where it intersects with RE2/3 are all too brief, and only the police station manages to look enough like the area that inspired it to get those nostalgia juices flowing. It simply doesn't go far enough. For example, there are a wealth of bizarre creatures to draw from RE2, but the game is oddly unwilling to take a chance on anything but zombies, lickers, and the occasional hunter. Where are the triffids? The giant animals? Any of the host of giant mutated blob-things that were running around Raccoon City at the time?

Brad: Since it's lukewarm as fanservice and fails as an adventure for newcomers, we should talk about how it actually plays, and that's an easy question to answer: not well. Although it's far from the worst thing I've spent time with, there are a lot of concerns here.

For me, an obvious mistake is that the dodge function is triggered by holding a direction on the thumbstick, clicking it down, and hitting A at the same time. With all of the buttons on modern controllers, mapping this vital move so inefficiently displayed staggeringly poor judgment on the part of the developers.

I was also surprised by the level of difficulty. Playing on Casual was still quite challenging—the developers don't seem to know how to scale foes appropriately. Even the weakest enemies are incredible bullet sponges, and the bosses take absurdly long to put down. Even with the two of us backing each other up, we still died several times. Playing solo was suicide. It's obvious that the enemies are meant to be ended by four live teammates, regardless of how many are actually playing. 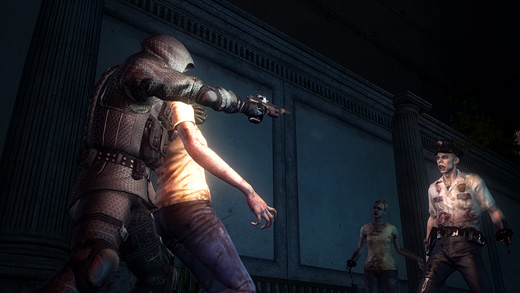 Dan: There's really no end to Raccoon City's shoddy controls and game design, whether it's the poorly-implemented cover mechanic in which it's nearly impossible to move to the edge of a wall without being exposed to enemy gunfire, or the melee system that doesn't work half the time. This title seems like it was never tested, or even thought through clearly.

Furthermore, a few of the areas are so dark that it's nearly impossible to tell what's going on despite the fact that every character appears to be wearing night-vision goggles. One character actually does possess different viewing modes, but they're a joke: Sonar vision is a pain to look at, and heat vision makes zombies invisible. Who thought any of this was a good idea?

Brad: What about the special abilities for each character? Each trooper has three, but only one can be used during a mission. It would be a trivial thing to let players switch between them on the fly, so this arbitrary limit makes no sense at all. Don't get too attached to one particular character, either—two players can't use the same agent, so the hours spent buffing a favorite are for naught if that one's already been called by someone else.

Dan: In addition to trying the campaign co-op, I played a few hours of competitive multiplayer, and didn't find it any more effective or enjoyable. If anything, the rough controls are more of a liability in online game modes—the terrible cover system may be just acceptable for battling slow-witted AI, against actual players it's wholly unusable. On the other hand, the one bright spot here is the inclusion of a well-designed opposing team. These Special Forces troops act as Umbrella's "good guy" counterparts, and it's a bizarre oversight that there's no second storyline for them.

The characters, the story, the controls, the difficulty, and even the central premise… all of it seems to be on the right track, but none of it hits the mark. I still think there's a lot of potential here, but like any other game, the basics have to be nailed before it can start reaching for greatness. Resident Evil: Operation Raccoon City

Parents: According to the ESRB, this game contains: blood and gore, intense violence and strong language. It should be pretty obvious to anyone that this game is all about shooting zombies and monsters with tons and tons of guns. There's a little salty language and no sexual content, so that side of things is fairly safe, but the violence factor is quite high here. It's probably not a title a parent would want little ones to spend an afternoon with. Just guessing.

Deaf & Hard of Hearing: Subtitles are provided for all dialogue, and no significant audio cues are unnecessary for competent game play. The onscreen maps are garbage and the fights can sometimes be quite chaotic, so whether you can hear or not, our feeling is that most players will be on equal footing.