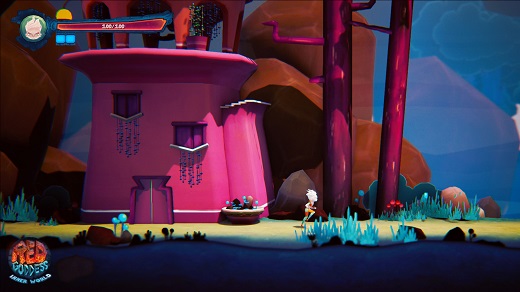 HIGH The surprising shift in the Narrator’s demeanor.

LOW Starting over because of a game-breaking bug.

WTF Seriously, did anyone do QA?

In the center of the cosmos, the gods King Odin and Queen Lena oversaw the harmony of the universe from their Fortress. Their rule was peaceful and orderly, until a long dormant threat re-emerged. An army of monsters led by the Dark King laid siege, slaughtering almost all of the royal family. Only their daughter, the young goddess Divine, managed to escape. Cast adrift in space, she retreated into a copy of her home created in her mind. Yet not even here could she find peace; the horror of losing her family had caused her to lock away most of her memories, hiding them behind barriers and monsters manifested from sorrow. To leave this mental prison, Divine must confront her own buried memories and the sadness she seeks to escape.

The premise of Red Goddess is definitely intriguing, establishing the possibility of a complex psychological exploration of Divine’s grief, feelings of loss, and possible survivor’s guilt… but disappointingly, none of this manifests in the actual game.

Despite the setup, Red Goddess is a fairly simple Metroidvania-style action platformer. Almost every area is blocked off until players have collected the appropriate number of crystals to get past a barrier, some of which can’t be obtained until a new power has been earned.

Apart from gathering the unlock crystals, though, there’s really no other reason to explore. Passages and alcoves that are inaccessible from the start don’t offer any impressive secrets, special powers, or hidden lore to enrich the story—they just hold crystals or coins that can be used to upgrade health and magic. Some of these hard-to-reach locations offer new skins to change Divine’s appearance, but that isn’t much incentive to explore.

Divine does have an impressive array of powers, though. There are standard things like the double and triple jump and the ability to cling to/jump off walls, but there are some that offer a twist. The Fireball allows players to not only stun enemies, but also to possess them and cause them to explode. Telekinesis enables players to move marked stone platforms in order to reach new areas or create a temporary barrier from certain hazards. The levitation ability allows Divine to float over danger at the expense of mana.

As a good Metroidvania should, the game tasks players with mastering each of these skills and using them in conjunction with one another by filling later levels with traps that can only be bypassed using them all, such as combining levitation and triple jumps to get through a narrow passage with fatal thorns on the ceiling and a pit of lava below. Another twist in the gameplay is a feature that tries to build on the aspect of Divine’s troubled mind—her ability to shift between two different forms, Rage and Fear.

Rage has a much greater attack power and is capable of shattering red blocks, while Fear can move more swiftly and destroy blue blocks. This color coordination also extends to combat. Drawing inspiration from Ikaruga and Outland, players can only destroy enemies whose color matches the form they are currently in. It is possible to stun-lock foes while in the opposite form though, which is useful when swarmed by a large number of both red and blue enemies at once.

So the gameplay is what it is, but what about that intriguing psychological premise? Despite the developer’s website promising that Divine’s mental landscape would be altered greatly by the negative thoughts brought on by trauma, I never saw anything to suggest it.

To be fair, there were moments when the narrator would mention that the world felt unbalanced or that her memories were growing darker, but aside from a slight dimness, these supposed alterations never manifested. The layout of the world remains fairly constant, with the only obstacles showing up feeling more like standard video game hazards than reflections of a fragile mental state.

Similarly, when Divine encounters phantoms of those she’s lost, there’s no sense of any deep bonds between them; no joy at seeing a family member she thought gone forever. The specters just tell her not to give in to despair and continue fighting. It’s the sort of trite encouragement one would expect from a minor NPC, not someone so crucially important to the protagonist. Not even the ending gives a sense of any personal growth, offering a quick ‘congratulations’ that would be more at home in a generic action game from the NES era.

The only strength of Red Goddess’s narrative is the mystery surrounding the narrator. At the start of the game he appears to be a storyteller disconnected from the events, providing exposition about Divine’s encounters and how they connect to her past. As she progresses and unlocks more memories, the narrator becomes sinister. He begins to actively berate the young goddess, belittling her for failures and making threats to keep her from moving forward. It was an unexpected, well-executed twist that managed to do what the rest of the story couldn’t in demonstrating how Divine’s mind was working against her. It was just a shame that after the final boss was defeated, the narration returned to normal without any acknowledgement of the ordeals she’d overcome.

Technically, the game’s a mess. I played the PC version of Red Goddess and found the experience marred by several bugs. There were many instances where the game wouldn’t register when I’d landed on a platform, causing me to phase through it and fall down, unable to proceed. Sometimes this would resolve itself on its own, while at other points I had to reload from an earlier save and hope the problem didn’t happen again.

There were also instances where the game would freeze and force me to exit out, as well as switches that wouldn’t trigger when interacting with them. The worst was a section where the camera didn’t pan down after I dropped down a chasm, leaving me stuck in a half-transitioned scene and unable to move forward. No matter how many times I reloaded this kept happening, to the point where I had to uninstall the game and reinstall it just to make it past that part.

Overall, Red Goddess isn’t a bad game, but not being ‘bad’ isn’t enough to make it stand out. The Metroidvania holds up well enough for those looking for an indie-sized experience, but the story is where it falters most—it promises a great set of ideas and fails to deliver the necessary elements to make it resonate. Rating: 5 out of 10


Disclaimer: This game was obtained from the developer and played on PC. Approximately 7 hours of play were devoted to the campaign, and the game was completed. There is no multiplayer mode.

Parents: Red Goddess has been rated E 10+ by the ESRB for containing fantasy violence. Characters are shown being murdered or their bodies are discovered after dying offscreen, but there is no blood or gore.

Deaf and Hard of Hearing: All dialogue is delivered in speech bubbled. Spoken narration is captioned, though not being able to hear the tone or inflection can lessen the impact of the narrator’s sudden shift. Audio cues are not needed to progress through the game.