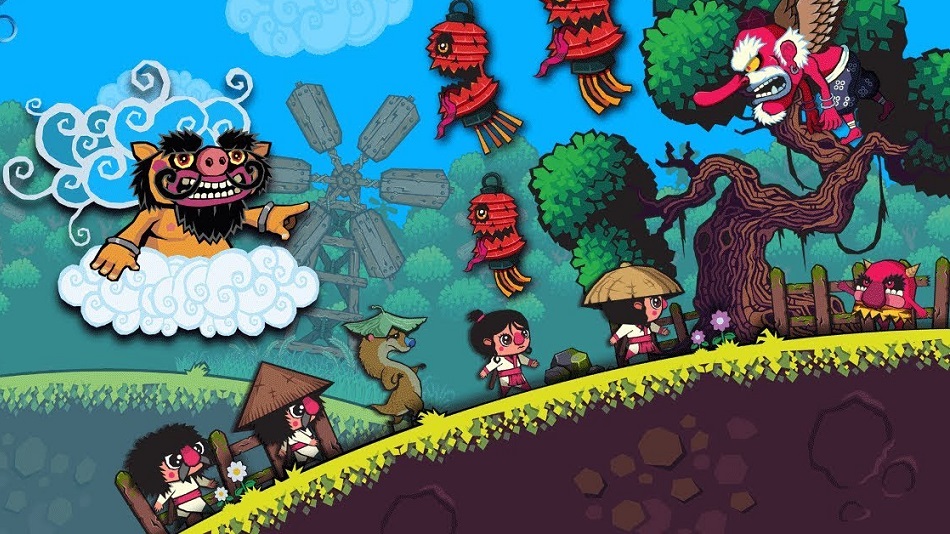 WTF This game is a literal pain in the neck.

Pop-Up Pilgrims is part platformer, part puzzle, and all Japanese.

While the word “Pilgrim” initially conjures up, for me at least, images of European settlers in Thanksgiving garb, I was pleasantly surprised by the upbeat music and the presence of cartoonish, medieval Japanese villagers running about.

After strapping on my VR helmet, I discovered that I was an Oni (a Japanese demon) given the responsibility of directing groups of highly motivated from an origin point to a traditional Shinto temple gate by traversing a multi-layered, two-dimensional level. If one thinks of Lemmings, then they’re 90% of the way to understanding what Pop-Up Pilgrims is about.

As my demon-with-a-heart-of-gold avatar floated above the villagers, the levels wrapped around my head in a semicircle, enabling me to lean in to look closer and examine different areas. While the viewpoint offered no real advantage from a mechanical standpoint apart from spotting a few collectibles, but it was a nice touch that made me feel as though I was interacting with a magical pop-up book.

The villagers are quick to run around on their own, and my divine intervention took the form of a cloud that, when attached to a villager, would trigger some response from them. Usually, it was something simple like jumping across gaps, but some villagers have special abilities — archers can fire a volley of arrows on command, sword-wielding samurai can break barriers, and so on. 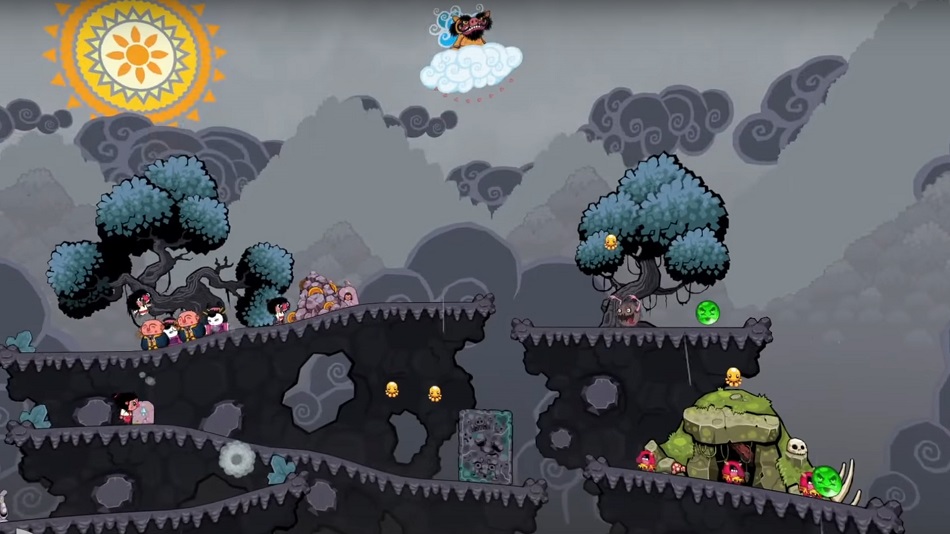 At first, the mechanics felt solid enough. The cloud was tied to the center of my headset’s view, and it moved with my head’s movement.  By attaching the cloud to villagers and then gently shifting my gaze away, I controlled the distance the villager would jump with an almost ‘slingshot’ effect.  Eventually, I had to get the villagers to jump various distances, leap into the fore- or background, or hurl themselves at piles of stones in order to break down barriers. At this level of complexity, it was all fine enough. However, the mechanics fell apart with even a marginal increase in complexity.

While settling my view on one or two villagers and “pulling” them along with my head movement was easy, I was quickly overwhelmed by the task of doing so with upwards of eight villagers at a time, all at different points and depths of the level.

Apart from underestimating jumps due to seemingly inconsistent distance calculations, I’d struggle to select the appropriate villager when they were in clusters and overlapping — it was common to have a group of villagers marching towards a gap and then accidentally launch the wrong one into the chasm. It was also common to accidentally shoot a volley of arrows when I intended for a different villager to leap over an obstacle. While a fast-forward function was thankfully included, it did little to limit the frustration I felt when the controls failed me.

Ideally, when a game combines puzzles and platforming, they should act in concert with one another. Fluid platforming should allow the player to explore possible solutions that ultimately lead to a satisfying execution.  However, in the case of Pop Up Pilgrims, I could usually read the landscape of a level and see what the solution would be — the challenge came from wrestling with the controls and testing my neck’s dexterity.  When I failed a level, any motivation to continue was jettisoned along with the willingness to endure the stress on my body as I found myself having to increasingly contort myself in order to successfully interact.

Pop-Up Pilgrims has a lot to like — cute and varied character design, appropriately festive music, colorful, animated visuals that overflow with sakura blossoms.  However, I simply couldn’t look past the struggles I had with the gameplay.  Due to the clunky, headset-guided controls and taxing physical requirements, Pop-Up Pilgrims would probably be a better experience without VR. Rating: 5 out of 10

Disclosures: This game is developed by Dakko Dakko and published by Dakko Dakko. It is currently available on PSVR. This copy of the game was obtained via publisher and reviewed on the PSVR. Approximately 5 hours of play were devoted to the single-player mode, and the game was not completed. There are no multiplayer modes.

Parents: According to the ESRB, this game is rated E and contains Comic Mischief. No real violence of which to speak.  Perhaps the most troubling part of the game would be seeing the a fallen pilgrim’s spirit float up from the hole into which they fell.

Deaf & Hard of Hearing Gamers: No need for audio cues, and all instructions and direction are given by on screen text.