HIGH Telling Rymergand to get stuffed.

LOW Battles that unnecessarily extend the length of the DLC by hours.

WTF The Memory Hoarder. The screaming.

As a Watcher, someone who can communicate with the souls of the dead, the player is naturally in high demand in Pillars of Eternity II: Deadfire. More warrior than medium, the Watcher is contacted for everything from bounty hunting to saving the world from a rampaging god.

There have been three DLCs released for Deadfire that are no exception to this rule — everyone wants a piece of the Watcher, especially the Gods of Eora in Beast of Winter, Seeker, Slayer, Survivor, and The Forgotten Sanctum. Each DLC deals with different gods, who either want their body back, want to escape the in-between, or want to freeze the entire world in ice. They’re all bananas.

The first Pillars of Eternity was Kickstarted for $4 Million, capitalizing on a renewed interest in isometric RPGs that were as impressive as those from the ‘90s. The successor to classic games like Baldur’s Gate (1998), PoE lived up to expectations—an epic title with intricate, beautifully detailed environments and some of the best game writing I’ve ever read. 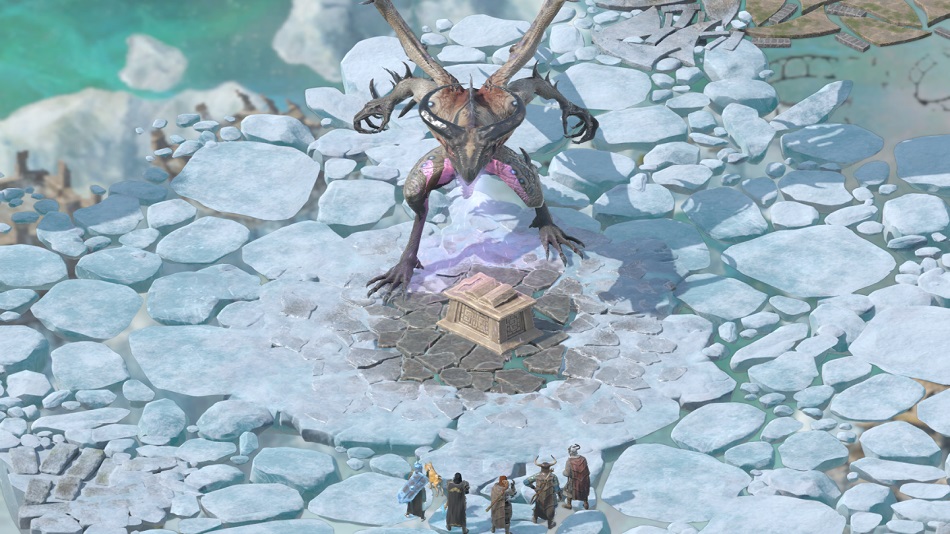 Pillars of Eternity II: Deadfire, released three years later in 2018, picks up when a monumental statue beneath the Watcher’s castle (newly possessed by the rogue god Eothas) decides to go on an adventure, exploding from the ground and killing just about everyone in the Watcher’s employ. The Watcher dies too—in a way—but is revived as captain of the Defiant, sailing through the chain of island nations known as the Deadfire.

Deadfire deftly tackles big, capital-T themes like colonialism and imperialism, putting the Watcher at the center of a conflict between races and factions. This review assumes that the player has been through most, if not all, of the base game, though there aren’t spoilers for the main quest.

In addition to playing through each of the three DLCs, I also played in Beta Turn-Based mode. Turn-based is radically different compared to the fast-paced Real-Time mode. Often, characters are so far from enemies that it takes several turns just to get into the fray. There’s no altering the actions that characters have queued outside of their turn and, when enemies move, Area of Effect spells frustratingly miss their mark. The speed gives the player time to think and strategize, but it doesn’t add anything that pausing in real-time can’t already provide. I would prefer if this mode could be turned on and off at will, rather than only at the beginning of a new game.

The Beast of Winter is available when the Watcher leaves Port Maje. The Watcher receives a letter from the far north of the Deadfire. Vatnir, who signs his letters High Harbinger of Dusk, wishes to invite the player to a feast in his or her honor. He also mentions that the ice of the Dead Floe is ever-expanding and “shall consume all,” which he seems sort of excited about? Upon investigation, it’s discovered that a pale elf cult has gathered to worship the Vytmádh, the entrance to the realm of Rymergand (the god of death). 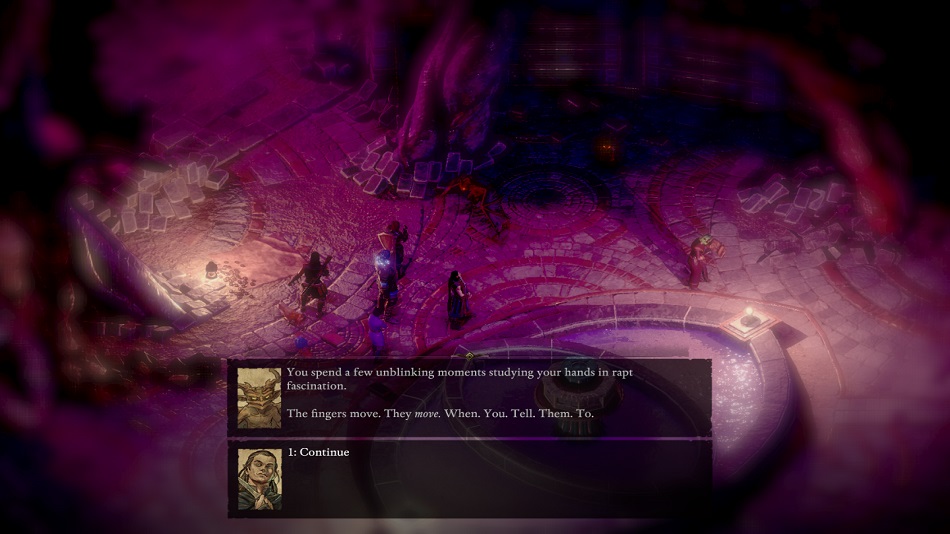 Beasts is a great example of how Obsidian’s writers are masters of their craft, using evocative story-book interludes paired with stunning illustrations. Conversations have great zingers, some of which will get the player killed but are totally worth it. Beasts also gives the player the opportunity to witness events only heretofore mentioned, expanding upon the already-extensive lore.

Equal parts funny and horrifying, The Forgotten Sanctum oozes personality. On the Black Isle, the Archmagi are following the wizard Maura who has disappeared into a giant subterranean library. Maura’s wizarding specialty is tentacles… The environments are therefore threaded with repulsive fleshy bits, part of the body of Wael that she seeks to awaken. Sanctum has some of the most disgusting bosses I’ve seen in PoE. Underneath the library, in a pit echoing with the screams of the dead, is the Memory Hoarder, who I won’t describe. It’s too disturbing. Later, Wael’s body is revealed to be a giant tentacled eye. Yuck.

There is, however, enough levity provided by the characters to outweigh the nasty. Tayn is a lovable goofball and Fassina is a great (understandably surly) addition to the party. There are also a pair of foulmouthed imps who function as shop and inn that add color to the story in bizarre ways.

Sanctum has an impressive set of maps if at times confusing. Being a library, however, there are a series of book placing puzzles that are boring and sometimes lead to shortcuts for already accessible areas that really didn’t need the extra complication. 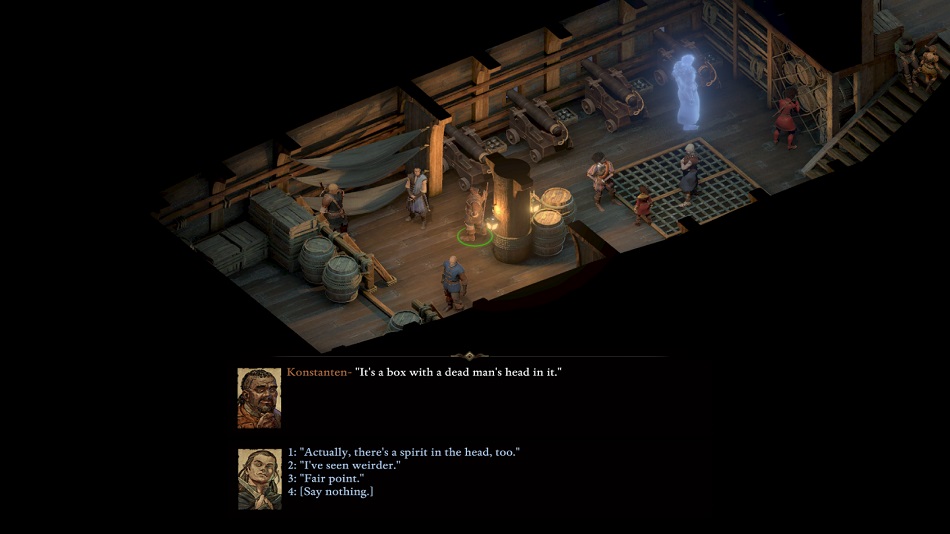 All the DLC quests are long, too, padded with what feel like endless battles. These kinds of encounters, which are difficult even in Storytime mode, stretch out quests unnecessarily. It took me only fifteen hours to get into the third act of the game’s main quest, less than the some 20-25 hours to play through all the DLC. While these new quests fail because they’re so battle-heavy, the stories in Beasts and The Forgotten Sanctum are still complex and engrossing.

This is not so with Seeker, Slayer, Survivor. Players who are big fans of the battle system in PoE, which is admittedly not my favorite thing about it, will enjoy the gladiator environment of Seeker. The island of Kazuwari is failing and it’s up to the Watcher to become the champion of the Huana god Taomawhei by fighting a series of battles against enormous monsters and other challengers in an arena called the Crucible. Something is wrong with the crucible and the challenge is to figure out what. However, there’s not much else to the story and when all is said and done it has an unsatisfactory and rather abrupt ending.

While Seeker disappointed me, it finds some purchase in that it appeals to a different kind of player than myself, one who is interested in testing their skills in numerous battles. These additions to Deadfire, with the exception of Seeker, are well rounded, engrossing stories with lively characters that build worlds within the larger game. These stories have a profound affect on the way the player understands the larger game and it’s lore and are well worth playing.

Disclosures: This game is developed by Obsidian and published by Versus Evil. It is currently available on Windows, MacOS, Nintendo Switch, PS4, XBox One. This copy of the game was obtained via Steam and reviewed on the MacOS. Approximately 25 hours of play were devoted to the single-player mode, and the game was completed. There are no multiplayer modes.

Parents: According to the ESRB, this game is rated Mature and contains Blood and Gore, Nudity, Sexual Themes, Strong Language, Violence. As per the ESRB for Pillars of Eternity II: Deadfire: This is a role-playing game in which players control a party of characters as they complete quests around a fantastical island region. From a top-down perspective, players interact with townspeople and engage in real-time battles with humans and creatures (e.g., boars, skeletons, elementals). Characters use swords and magic attacks to defeat enemies in brief, frenetic combat; battles include large splashes of blood, and sometimes, chunks of flesh. A handful of game environments depict severed limbs and torsos littering the ground. During the course of the game, players can hire courtesans after selecting flirtatious dialogue choices (e.g., “I wouldn’t mind seeing you again…so long as you come with coin.”); other text and conversations include suggestive/sexual references (e.g., “[He] accused a man of…indiscretions with his own sister”; “The two of you tumble into your bunk, and you pass a few sweaty hours in one another’s company”; “[He] called someone a sister-f**ker.”). A bath-house sequence briefly depicts nude characters with bare breasts, as well as male genitalia.

Deaf & Hard of Hearing Gamers: This game is easily played without sound. There are no cues, particularly in battle, that can’t be made visible on screen. Some characters make comments that are not subtitled but they are non-essential comments. Any unique companion dialogue is subtitled. There is text that can be magnified up to 130%.

Remappable Controls: Yes, this game offers fully remappable controls. Additionally, almost all controls can be accessed via buttons on screen.

Lol decides to play the game in turn based mode and then proceeds to complain about how long and drawn out the battles are. SMH. If you played it in Real Time with Pause like its meant to be played then things would be way more streamlined and faster paced. Turn Based mode is tacked on to get a few more sales out of the Divinity crowd and people who complained that they wouldnt play rpgs that arent turn based. Everyone knows RTwP is superior, especially if you are playing the Pillars series as a way to fill the Baldurs… Read more »

Battle extend the DLC… well if you just want the story you can play a walktrough of pillar of eternity 2 on youtube. I love tactical combats, hard combats, combats where you need to pause and think. I don’t play a game for the joy of reaching and watching the end credits as fast as possible. It’s like going to a 5 stars restaurant and eating as fast as possible to get over with it (hmm only 10 minutes, that was a great meal). Battles are a huge part of this game. Its like playing soul calibur and complaining you… Read more »

What I will never fail to appreciate about reviews from gamecritics is the sheer depth and detail.

Few reviews out there go into depth anywhere as much as this one, and it’s great.

It helps people interested in the game make an educated decision on wether or not I want to play a game.

Thanks to the great amount of info provided here.

And yeah, I appreciate the mechanics/gameplay improvements in Deadfire.