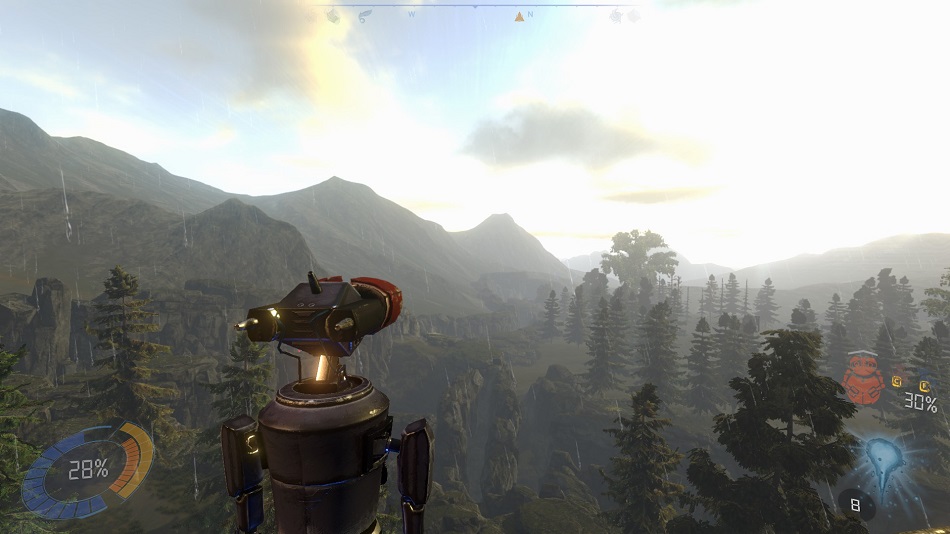 WTF I was not expecting to find… that in the desert.

P1 is the first planet in existence to have all but eradicated the scourge of death. Its inhabitants discovered a way to transfer their minds into stable robotic bodies that would never age, and remain free from illness and injury. Of course, even in their new non-organic forms they still need regular maintenance, so P1 regularly sends units to other planets in search of the raw materials needed. One of these ships crashes while surveying an alien world. The ship’s unit, ION, is tasked with finding a way to contact the homeworld to be rescued while scouring the planet for anything that will help it in its quest.

Phoning Home is, sadly, another instance where I feel it would be more enjoyable if the devs focused more on the backstory than on what they actually put forward. A world where everyone’s mind has been put into a mechanical body would be rife for a deep, philosophical examination of mortality and what it means to truly be alive — it’s frequently mentioned that the people of P1 have eliminated all remnants of their former existences, from altering the ecosystem to get rid of “unnecessary” organic life, to abandoning art, music, and emotional pursuits as frivolous or unproductive. They strip-mine other worlds to survive, but is it justified, or are they murderers keeping other planets from reaching an advanced state? There’s even a counter-faction who want wants to preserve the old ways others want to discard.

Expanding on these ideas could have made for a solid, thought-provoking narrative, but Phoning Home misses this opportunity and instead opts for making yet another open-world survival game with crafting elements.

I admit I’m not a huge fan of this genre, but it plays well for what it is. ION’s goal is to explore various environments and collect crystals, minerals, plants and the like. These then become the resources needed to create fuel, repair the ship’s hull, and fabricate circuits or other electronic components. Some of these items are also used to repair ION when damaged, or to finish one objective and unlock the next

At the start ION has very few capabilities. As progress is made, players will be able to unlock upgrades such as expanded storage capacity, a powerful vertical thruster, a wider range on ION’s scanner, a kinetic damper to negate fall damage, and even portals that can be used to travel large distances quickly, or to bypass certain obstacles.

As more items become available to craft, the need to constantly search for new resources gets tiresome. It would help if there were diversions other than simply taking in the environment while searching, but there’s nothing to do except find materials. I never felt like I was accomplishing anything other than busywork. If I had to look for a material I hadn’t come across yet, I basically had to head off in random directions and pray that I’d find what I was looking for while hoping I didn’t get lost — this can be difficult when night falls since there’s no map function, and the surroundings can start to look similar. Most annoying was when I had to explore a frigid arctic region and my scanner was disabled because of the extreme cold, leaving me blind as I scrounged around.

Incredibly, for a survival game there are relatively few threats. The most common danger encountered are insect swarms that try to attack ION. However, they can be easily fended off with just a few blasts. Other wildlife like giant arachnids and creatures made of stone appear intimidating, but they’re rather easy to avoid as long as players maintain a safe distance and circle around. The biggest dangers are fires and energy vortexes, or falling from a high distance.

Early in the adventure, ION comes across another ship from P1 and meets its mobile unit, ANI. Having her around makes it possible to detect a new resource and she has her own weapon, so ANI can be useful… but at the same time, she can be a hindrance. 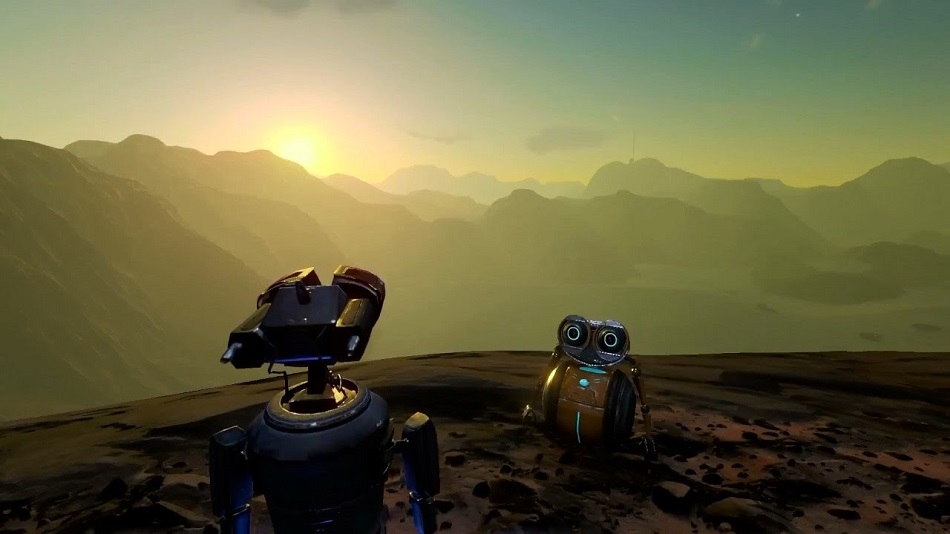 When first met, she doesn’t have a vertical thruster, so the only way to move her up to higher ledges is by carrying her or guiding her through portals. She’s also vulnerable to corrosion, and if her corrosion level becomes too great, players must regularly apply coatings, repair her hull, or simply have her wait in a shelter until danger passes. It essentially turned Phoning Home into an escort mission, and as is so often the case with escort missions, it drags the entire game down.

While I didn’t find the gameplay compelling, I hoped that the story would be good enough to compensate. But again, was disappointed. Phoning Home has a message, and is not subtle about it. The game is constantly hammering home how wonderful the natural world is, demonstrating how the attitudes of ION and his people are wrong. ION’s time spent with ANI mellows him out, but for the most part this aspect of the script is just a strawman without nuanced debate.

The interactions between ANI and ION don’t really work, either. ANI appears to be one of the few robots that has emotional states — she’s incredibly enthusiastic and naïve, always eager to help out. She apparently has some connection to the planet they’re on and is able to sense its “feelings”, though it’s never explained how.

While Phoning Home tries to make it seem like a bond is developing between ANI and ION, it doesn’t work for two simple reasons. First, ION is a silent character, so all conversations are one-sided and never show reciprocation of feelings. Second, nothing in the dialogue or interactions come close to a genuine, growing connection. The developers clearly wanted players to have an emotional bond with ANI, but they don’t earn it.

Phoning Home isn’t without merit, though. The alien world is fascinating to explore when players aren’t running back and forth for resources. There are a limited number of environments, but they’re presented incredibly well. Ambient noises like the cries of animals in the forest, whipping winds in the desert, and water lapping up around ice floes enhance the idea that this is a vibrant world with its own ecosystems, and though the wildlife encountered is sparse, the first time I came across the rock creatures and giant arachnids, I was genuinely impressed. Other discoveries such as the bones of a massive creature in a desert and abandoned villages are small (but effective) steps in suggesting the planet has a long, complex history.

There’s also a sense of mystery throughout. It’s frequently mentioned that the planet exhibits anomalies, and the abandoned villages have messages that, when decoded, hint at some great catastrophe. Later, the planet itself seems to actively react to ION and ANI’s exploits as portals appear and spawn swarms of enemies, as though it were trying to stop them. The cause is foreshadowed heavily, but the end revelation is still handled well.

Phoning Home plays well enough for its genre and has several good world-building moments, but it just wasn’t for me. I was hoping for something a little more complex given the excellent premise, but it never developed. Players who are fond of survival/crafting games might get more out of it than I did, but they should be prepared to do a lot of babysitting when ANI makes her appearance. Rating: 5 out of 10

Disclaimer: This game was developed and published by Ion Lands. It is available on PC. Code for this review was obtained from the developer and played on PC. Approximately 10 hours of play were devoted to the game, and it was completed. There is no multiplayer mode.

Parents: The ESRB has not rated this game. I would estimate it being an E10+ or possibly a T. There is no violence or gore, and only infrequent, mild swearing.

Deaf & Hard of Hearing Gamers: All dialogue is subtitled. No environmental hazards or enemy attacks are telegraphed by sound. It’s fully accessible.

Remappable Controls: The controls are not remappable, but the game can be played using either a keyboard and mouse or controller.

Colorblind Modes: There are no modes for colorblind players. This can make searching for some objects indicated on the scanner difficult, though the items have unique shapes.