Welcome To My Nightmare. 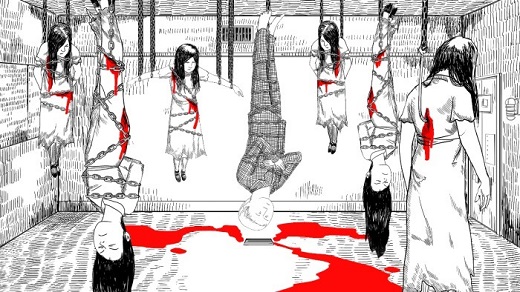 LOW: Later chapters tend to drag on and throw off the pacing.

WTF: Did that monstrous infant call me “Papa”?

Is the horror genre stagnating?

Critics frequently rake publishers and developers over the coals for turning titles marketed under that banner into nothing more than action titles with grotesque enemies. In contrast, the independent game scene has been reviving true terror for years, but now it appears to be suffering as well. Cynical developers hoping to capitalize on the success of acclaimed works like Amnesia: The Dark Descent and Lone Survivor have been churning out uninspired, derivative shovelware that poorly copies common elements seen in better titles.

All too often, the people ripping off these games don’t understand how or why they worked, and the final product is usually a disjointed mess. Titles like Slender: The Arrival and Daylight fail to comprehend that flickering lights, scattered files, predictable character twists and random jump scares will not create a good horror game. They will only startle, or even make players laugh at how ineptly they’ve been executed.

That’s not to say these elements need to be abandoned, though. Any narrative or mechanical device can work if properly implemented. They should serve to build a sense of dread and unease instead of being tossed in because other games have them. Neverending Nightmares from Infinitap Games is a perfect example of how reoccurring horror elements can feel fresh again when they support the narrative to deliver a truly terrifying experience…

This particular game’s terror? Thomas suffers from constant nightmares. His dreams are plagued with gruesome, murderous images, many ending with the brutal murder of his sister Gabrielle. After one such dream, Thomas wakes up only to discover that Gabrielle has committed suicide. Overcome with grief, he mourns his sister’s death… only to wake up once again. Thomas is trapped in a seemingly-endless cycle of nightmares, unable to differentiate reality from the twisted designs of his subconscious. Is he simply having a troubled sleep, trying to suppress the reality of past sins, or could he be going mad?

The inspiration for Neverending Nightmares came from director Matt Gilgenbach’s own personal demons. Gilgenbach has suffered from OCD and depression for more than 13 years, and has been very candid in interviews about how these disorders affected him. At his lowest points, he didn’t want to get out of bed and was overwhelmed by morbid thoughts. He even considered self-harm and suicide.

As I said earlier, the game makes liberal use of conventional horror fixtures, but I found that they served to reinforce the concept rather than existing here just because. 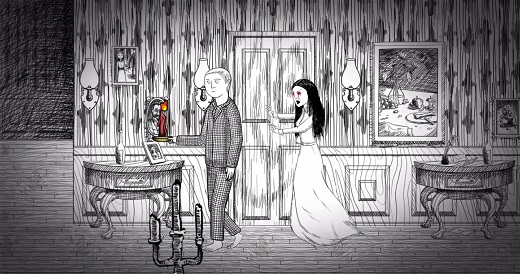 For example, Thomas can’t move very quickly, reflecting how severe depression can make people feel as though they’re weighed down and have difficulty focusing on simple tasks. Much of the morbid imagery like scenes of self-mutilation and suicide came directly from the intrusive thoughts that plagued him. Knowing this, the game feels bleak and dreadful (rather than recycled) as players are actually experiencing a representation of the horror that overwhelmed its creator.

Frankly speaking, there’s little gameplay in Neverending Nightmares. Aside from instances where an item is required to progress (a candle to see in the dark, an axe to break down a door) much time is spent moving from one room to another to find an escape.

There are also several instances where Thomas must avoid monsters which can instantly kill him. There are no weapons available for players to fight back, so the only option is to run and hide, but this poses a challenge. Hiding spots are spread out, and Thomas can only sprint for a short distance before he becomes winded and must stop to catch his breath (presumably he’s asthmatic.) Though the mechanics are simple and familiar, they add more weight to the feeling of helplessness pervasive throughout the game.

There are porcelain dolls with empty eyes, phantoms that quickly appear and vanish after letting out a chilling scream, mutilated corpses scattered about, and enigmatic messages scrawled on the walls in blood. However, they aren’t used merely because other games have featured them. While not wholly original, here they supplement the other aspects that reflect Thomas’s fragile mental state.

Interestingly, each time Thomas awakens, the world around him has changed. Sometimes the layout of the house is different, other times it’s become decayed and decrepit. He may wake up as a child, or can even find himself in an insane asylum. The constant changes reinforce the idea that Thomas is slowly losing his grip on sanity, with the implication that one of the more hellish settings is the reality he’s stuck in.

Further, players never know when the current section will end, creating a strong feeling of unease. On the other hand, considering that players can’t run quickly for very long, navigating later, longer levels can become incredibly tedious. This becomes an even greater annoyance when trying to unlock the alternate endings, as some conditions require backtracking through a stage. It’s unnecessary padding which ruins the pace the game maintained throughout its first half.

Speaking of endings, there are three possible, each dependent on certain actions taken in a specific chapter. While only one can be considered a “good” outcome, there’s a deliberate ambiguity concerning whether or not it’s the true ending. Any or all of the conclusions could simply be another layer of Thomas’s madness. It’s a subtle effect that most players might not pick up on their first time playing, but it greatly bolsters the game’s overall tone and the sense that players are controlling someone with a troubled mind.

An unconventional game like Neverending Nightmares will not appeal to everyone. Some players may be put off by its vague narrative, prolonged later chapters, and lack of conventional gameplay. Those who are willing to look past its flaws will find a truly gripping tale of psychological horror, and possibly a greater empathy for those suffering from psychological disorders who endure such hell on a regular basis. Rating: 7 out of 10.


Disclosures: This game was obtained via a Steam product code provided by the publisher and reviewed on PC. Approximately 2.5 hours of play were devoted to the single-player mode. The game was completed, with all three endings obtained. There is no multiplayer mode.

Parents: Neverending Nightmares has yet to be given an ESRB rating. There are several scenes depicting murder, suicide, and mutilation. The monster designs may be too disturbing for some players.

Deaf and Hard of Hearing: There is minimal dialogue, but there is an option to activate subtitles. Lack of sound will not hinder gameplay, but being unable to hear the background music or sound effects detracts from the suspenseful atmosphere.