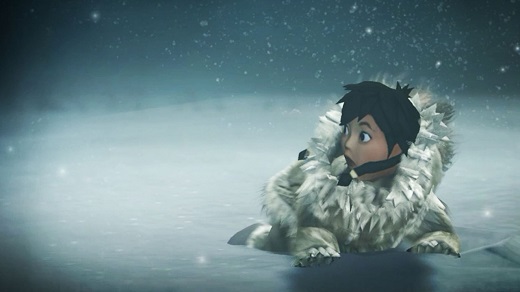 HIGH: Successfully reaching the top of the ice giant’s body.

LOW: Several cheap deaths in the second half.

WTF: The chattering of the Little People make them sound like minions from Despicable Me.

Native American folklore is grossly underrepresented in pop culture. There are countless tales from the tribes that populate the United States, each offering their own interpretation of creation stories, legendary heroes and epic battles, yet they’re ignored by a mass media which prefers to oversimplify these rich cultures. There’s more to the First Nations besides solemn characters respecting the environment, or seeing a Skinwalker or Wendigo as the monster of the week in a supernatural series.

Currently, the best hope of seeing accurate depictions of indigenous culture in the media is to see it presented by creators who are Native American and have thorough knowledge of the material. While they have been denied a voice for decades, recent years have provided them with a greater opportunity to reach a wider audience.

Upper One Games, most of whose staff is of Iñupiat heritage, recently released Never Alone, the first title in their “World Games” series intended to create rich experiences based on the legends of indigenous people from various countries. While this 2D puzzle-platformer is unpolished in some areas, it more than succeeds in bringing their vision to life.

Never Alone adapts Robert (Nasruk) Cleveland’s retelling of Kunuuksaayuka, a centuries-old Iñupiat myth intended to teach humility. For all of humanity’s knowledge and accomplishments, there are forces in nature that cannot be easily understood or conquered. There is always something bigger or more dangerous that can pose a significant threat. Usually in such stories, one of the more humble members of the tribe is responsible for overcoming the dangers and restoring order to their community.

Several changes were made to better translate Kunuuksaayuka to an interactive format. One of the greatest differences between the game and the story is the gender of the protagonist. Kunuuksaayuka was originally a young man, while the game’s star is Nuna, a young woman. This change wasn’t influenced by social pressure or a desire to be seen as progressive, as some cynics might claim. Writer Ishmael (Angaluuk) Hope explained that in Iñupiat lore, whether the hero is male or female is irrelevant; what’s important are the lessons they learn.

Another significant alteration is that while Kunuuksaayuka traveled alone, Nuna is aided by several spirits, one of them taking the form of an Arctic Fox to serve as her constant companion. The presence of the spirits represents the connection between the people of the tribe and the natural world. The Fox specifically was chosen as Nuna’s partner because Iñupiat culture portrays foxes as tricksters that will help people in trouble.

While there’s never any spoken dialogue between the girl and the fox (aside from occasional narration), it’s clear that there is a strong bond between the two. Whenever one character dies, the other will let out an anguished cry of sorrow at the loss of their friend. It’s a very effective method of conveying emotion without words. 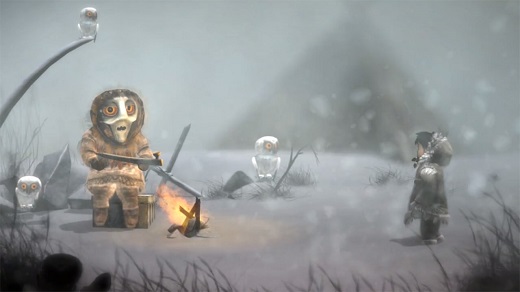 Interestingly, the developers have create puzzle-platforming mechanics that feel true to the setting because many obstacles are based on actual hazards found in the Alaskan wilderness. The effort put into recapturing these conditions makes it feel as though the game truly is set in the harsher regions of the Arctic rather than another generic ice level—fierce winds will frequently push the player back. Ice floes will shift as Nuna moves across them, and of course, icy surfaces have reduced friction, necessitating careful maneuvering if players don’t want to slide off a ledge after jumping.

Much like Brothers: A Tale of Two Sons, Never Alone allows players to control both Nuna and the Fox in utilizing their individual strengths to move forward. A second player is required to use both characters simultaneously, while single players must alternate between the two.

Nuna, being larger, is able to move certain objects in order to open new paths. She also has a bola which serves to destroy obstacles such as fragile ice walls or tree branches. The Fox is much more nimble, capable of jumping higher and holding onto ledges before falling. With its smaller build it can pass through narrow passages Nuna can’t to find something that will help her progress, like lowering a rope so she can climb up to a higher ledge.

While this is a solid design, there are some issues with the controls. When preparing to throw the bola, there’s no reticle or cursor to indicate its trajectory, which resulted in several instances when I missed a target even though it seemed like I had the right angle. Also, AI characters have a tendency to randomly move when they’re not being controlled, leading to some frustrating situations and annoying setbacks that soured my experience.

Unpredictable NPC movements are problematic, but they’re not the biggest flaw. During the second half there are segments which require trial and error repetition to avoid dying. The most egregious example is when Nuna travels through a damp forest. Players need to stand on the branches as the trees move, then jump off when they’re close to land. However, the positions of the next safe platforms aren’t revealed until just a few seconds before it’s too late, meaning that success comes more through memorization than skill.

In terms of story criticism, the only change made to the tale that felt unnecessary was the presence of the Manslayer. In lore, this figure signifies a chaotic presence that threatens the stability of a tribe, yet his appearance in the game didn’t serve any purpose. He destroys Nuna’s village and appears to lead its people away, but his motivation is never revealed. It felt like the only reason the Manslayer was included was to have a more conventional video game antagonist that could be fought and overcome, even though there was already a strong conflict against nature. It didn’t hurt the story, but it didn’t improve it either.

Despite my frustrations with some unfair aspects of the gameplay, I found Never Alone to be incredibly compelling. I hope that Upper One continue their plan of bringing lesser-known tales to a greater audience, refining their design while expanding cultural horizons—and I hope more studios will take notice and follow their example. Rating: 7 out of 10


Disclaimer: This game was obtained via a review code provided by the publisher and played on the Playstation 4. Approximately 4 hours of play were devoted to the game, and it was completed. There is an option for a second player to control the Fox with an additional controller.

Parents: The ESRB rates this game as T for containing violence. There are some segments which depict cruelty against animals, including murder, which may upset certain players. One antagonist dies, but the scene does not contain any blood or excessive gore.

Deaf & Hard of Hearing: Subtitles are available in multiple languages. The game does not rely on audio cues to progress.