Pictures Without An Exhibition 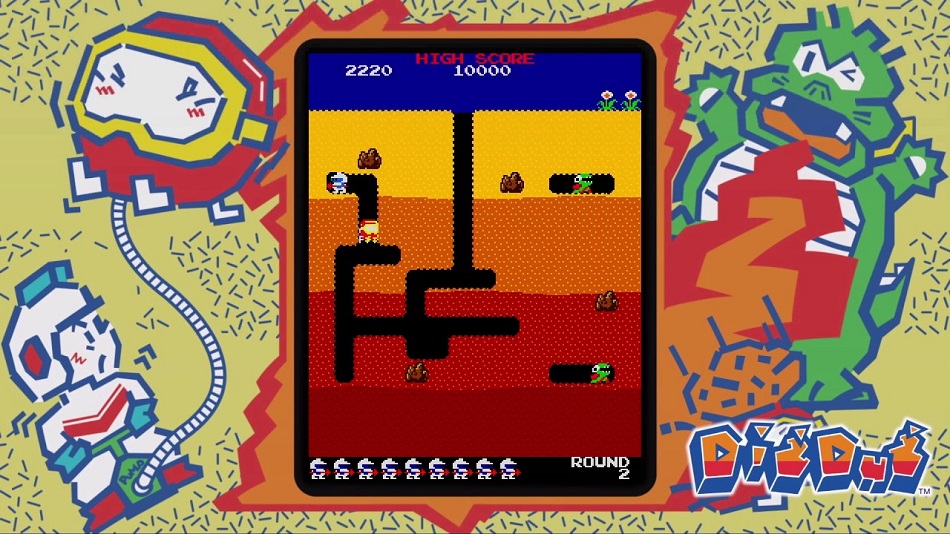 HIGH Solid emulation quality and a wealth of configuration options.

WTF Why let players rotate the display without rotating or reorienting the controls to match?

“Can’t I just download this game off the internet?”

If there’s any release that’s guaranteed to spark tiresome discussions about the monetary value of a videogame, it’s a classic collection. On top of the endless hand-wringing about the convenience (and morality) of emulators, there’s always been an expectation of obsolescence for older titles — an old wound from misguided traditions of treating games as software where achievement was primarily measured through technical advancement. Naturally, a classics collection inherently complicates that discussion through the commodification of its selections under a single – and often cheaper — price point.

Earlier entries in the Namco Museum series, however, demonstrated that a collection can also be an act of canonization — a quotation of history and purpose that carries meaning in itself. Through their virtual museum spaces (which predated some of the ‘walking simulators’ that have become more popular in recent years), the early Namco Museum releases provided a wealth of supplemental material, such as scans of merchandise and other promotional items, that allowed the player to have a glimpse of the world and the time when these classic works captured players’ imaginations.

For the Switch edition of Namco Museum, however, all of the supplemental material is gone and new features centering on configurability and the unique capabilities of the Switch have been pushed to the forefront. All of the arcade games included here offer a wealth of options for tweaking the experience including various scanline filters, analog dead zone tweaking, and single-slot save states. Additionally, each game has a challenge mode, which is usually a time-limited mode where players try to complete a particular task as many times as possible, but they aren’t distinctive enough from the core game to be all that interesting. If the player’s primary concern is how the original games play rather than why they should play them, then the options presented here are solid enough.

The most notable game in this edition of Namco Museum is Pac-Man Vs., the revered 2003 GameCube enrty with asymmetric multiplayer that allowed players to play the role of ghosts working as a team to chase after Pac-Man. Much of the buzz surrounding Pac-Man Vs. over the years has come from a sheer lack of access — there aren’t many ways to play this game and the Switch’s ad-hoc multiplayer (which requires a second Switch for full four-player action) provides the most compelling and accessible setup. 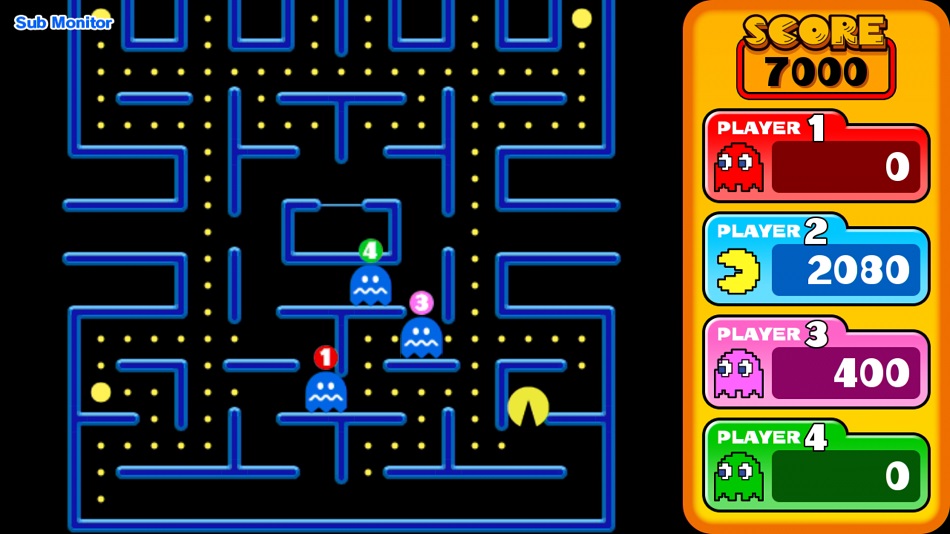 Once players finally make it into a session of Pac-Man Vs., though, they will be disappointed to find that its unique premise doesn’t develop into anything more than novelty. The limited vision that forces the ghost players to work together is a decent hook for local multi, but the scoring mechanics only reward the individual player that catches up to Pac-Man, which creates friction against the rest of the design. Since play completely stops whenever one of the ghosts finally catches Pac-Man, this friction feels even more emphasized and it makes the overall pace of play for each session feel a bit stilted and awkward.

The emphasis on local multiplayer continues with the inclusions of Tank Force and Sky Kid. With Tank Force, it feels like Namco dug into the vault for something that would double as a curio for history aficionados – this is the first time the game has ever been released in North America – and its cooperative play and maze-like levels create something that feels like a proto-tower-defense game, years before that genre would become a cliché. Meanwhile, Sky Kid offers a pleasant variation on the scrolling shooter with some interesting recovery mechanics — not only can players save themselves from a crash with frantic button-mashing, cooperative partners can rescue each other by shooting their falling partner in mid-air.

Sky Kid isn’t the best shooter on the compilation, though — that honor goes to Galaga, and despite being relentlessly repackaged and re-released over the years, the 1981 classic still feels as sharp and as vibrant as ever. The distance from the ship to the iconic enemy formations makes every shot fired a keen test of precision, and the progression of enemy attacks into faster and more aggressive pursuits turn those shots into increasingly precarious gambles. Even when the element of danger is removed from its “challenging stage” intermissions, Galaga still demands perfection from its players by emphasizing shot accuracy as the primary determinant of higher bonus scores. The HD rumble burst that chimes for every enemy destroyed is an unfortunate distraction from what otherwise remains a masterpiece of single-screen shooting.

Another notable inclusion that fares surprisingly well is 1988’s Splatterhouse, a gruesome horror-themed brawler that almost assuredly raises the ESRB rating on the entire collection to a hard T by simply being included. There is a sluggish, methodical physicality to everything in Splatterhouse and all the configurable enhancements to the presentation do a wonderful job of embellishing the brutality. The level design can be surprisingly ambitious at times for a side-scrolling brawler thanks to branching paths and evocative background art, but they only go so far in disguising the game’s single biggest weakness: the uneven design of the bosses, which are either punishingly difficult or incredibly tedious. 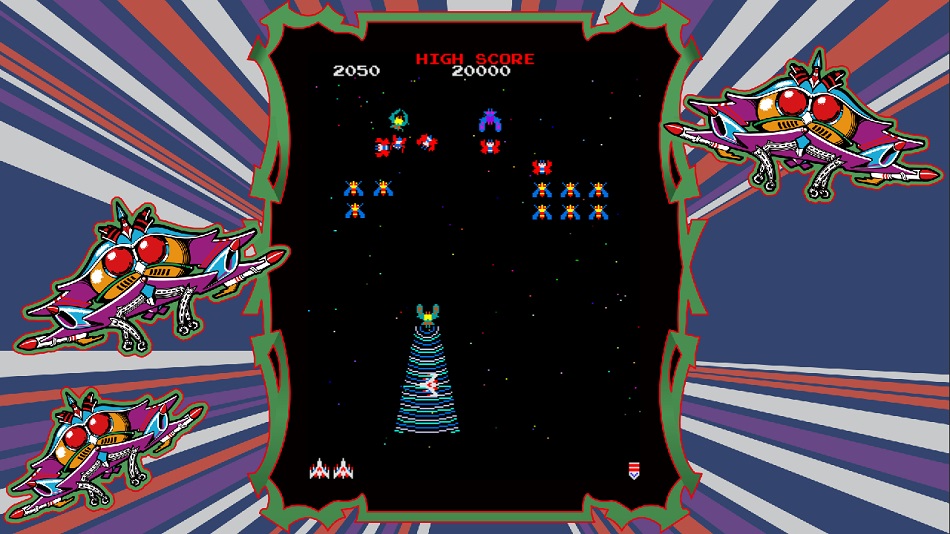 Of course, uneven difficulty spikes are hardly uncommon for arcade games from this era, and both of the Rolling Thunder games included here fall into the same trap. Rolling Thunder 2 is another multiplayer-focused rarity – though the Sega Genesis port made it stateside in 1991, this is the first time the original arcade game has been released in North America – but, even with a second player, the sidescrolling designs fall into the same stop-and-pop rhythms as its predecessor, requiring players to carefully memorize levels and enemy placements to make progress.

Pace of play becomes a bigger issue for the other classic maze games in the collection, such as Dig Dug and Tower of Druaga. Druaga in particular is unceremoniously dropped into this collection with only a hint system that reveals the mystery item to be found on each level — a player-friendly surrender that concedes the wonder and discovery at the heart of Druaga’s incredibly punishing design. It’s difficult to imagine the uninitiated sampling Tower of Druaga and leaving with an appreciation of its history as a beloved dungeon crawler that inspired Japanese arcade communities to collectively uncover all of its mysteries.

Ultimately, by neglecting to tell the stories about these games, Namco Museum on Switch leaves its selections in the unenviable position of selling their legacies to contemporary players on gameplay alone. Namco Museum would have prospective players believe that these selections are valuable, timeless experiences, but the reality is that no game is timeless — every one exists in its own moment, a photograph with its horizons safely tucked away in the background. For players that have the memories, maybe a faithful recreation is enough. But the rest? They’ll be left wondering what all the fuss was about. Rating: 6 out of 10

Disclosures: This game is developed and published by Bandai Namco. It is currently available on Nintendo Switch. This copy of the game was obtained via publisher and reviewed on the Nintendo Switch. Approximately twelve hours of play were devoted to the single-player modes across the collection and no games were completed. Three hours of play were spent in multiplayer modes.

Parents: According to the ESRB, this collection is rated T and contains Blood and Gore, Suggestive Themes, and Violence. Splatterhouse is filled with gory imagery throughout its enemy designs and environments, which often include animations of bloodied victims and pulsating corpses. Additionally, its violent combat often results in brutal kills where enemies are decapitated or spray blood upon death. Rolling Thunder 2’s default background also includes pin-up style art that is suggestive, though players can select a different border in the options.

Deaf & Hard of Hearing Gamers: Galaga ’88 has bonus “Galactic Dancin’” levels where the enemy formations are tightly choreographed along with musical accompaniment. Players cannot lose a life during these bonus levels, but deaf/hard of hearing players will have to rely more heavily on carefully timed memorization to produce higher bonus scores. Tower of Druaga has an optional hidden item that plays a tone to hint to the player that they are walking in a direction on the map where a key is located, but this item is not required to complete the game.

Remappable Controls: Yes, each game in the collection offers fully remappable controls, including dead-zone adjustment for the primary analog stick. However, these controls will not rotate or shift along with any display rotation, which means that a screen rotation will require a Joycon to be disconnected from the Switch for standard controller usage.