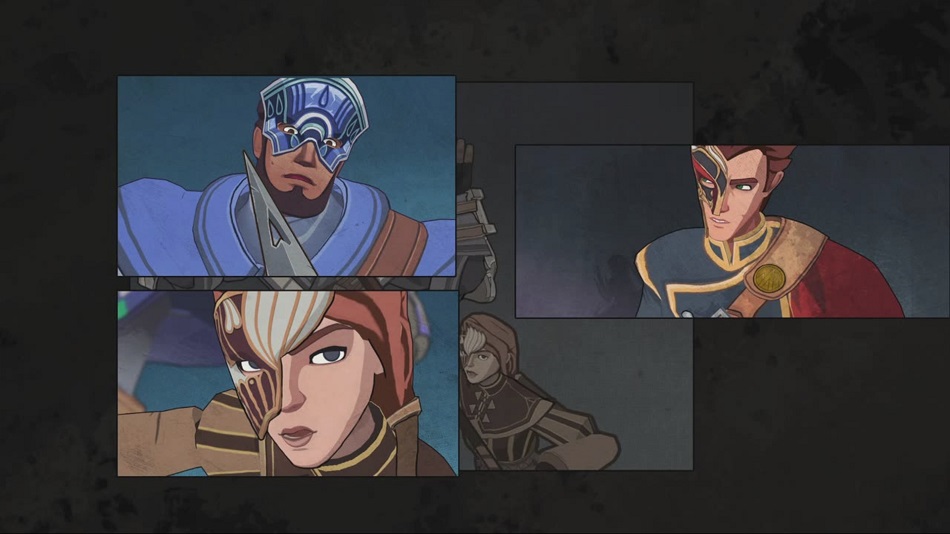 HIGH A truly gorgeous game that offers as much emotionally as it does visually.

WTF The sheer number of animals that don’t care that there’s war going on around them.

Few games offer a story as beautiful and as heartbreaking as Masquerada: Songs and Shadows. As Cicero Gavar, the player is thrown into a world of characters who are layered and complex, and Witching Hour Studios has done an exceptional job of maintaining consistency throughout — each individual displays depth, passion, and emotion.

Masquerada is a linear RPG strategy title offering real-time (but pause-able) combat, a mystery-style investigation, and a compelling storyline. When the player revisits old maps there are new collectables available, and a complex skill tree and power system provides an element of customization.

During the prologue, the player takes control of Cyrus, the brother of the main story’s protagonist. This prologue offers a tutorial, as well as an introduction to a world in which people draw magic powers from a variety of masks. Unfortunately, these masks are going extinct since they disappear when the wearer dies. Set in a renaissance Italian-style world, art and beauty are crucially important to the culture and masks are painted in different styles to provide powers to the wearer.

Cyrus and Cicero have pulled themselves through society’s ranks to become high-standing nobles, but Cyrus has taken the side of the maskrunners, a group directly opposing the body in power and stealing the masks that grant magic. Cyrus is killed at the end of the prologue, and then the player starts the game proper as Cicero. His role in the demise of his brother is explored as he interacts with a host of other characters, each with their own story. The array of personalities is impressive and the player is able to take control of several others besides Cicero during combat.

At the beginning, the player is offered the ability to choose a “brand” from the typical elements of Water, Earth, Fire, or Air, and given an appropriate mask to channel these powers. Although the skill trees are fairly straightforward, they offer astonishing flexibility and I found myself discovering new things even late in the campaign. Each of the other characters has a different brand, including some that were not options for the player — one controls spirits and is able to set stampedes of ghostly horses against enemies, for example. By adding them to the party, this allows the player to try powers outside of the starting set. 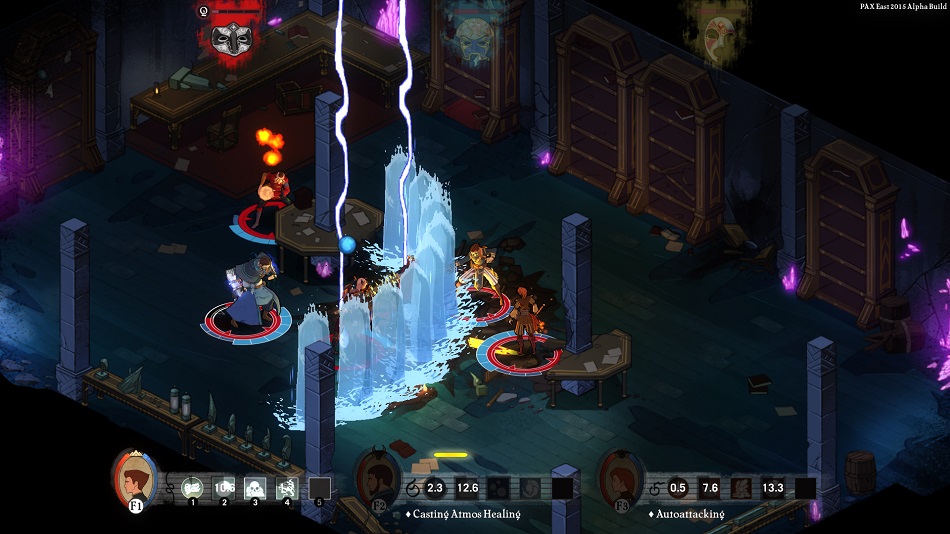 Throughout the story, the player also collects different masks and unlocks new special powers. Ultimately, each character ends up with something in the area of ten different masks to choose from. Unfortunately, the other characters won’t use special power on their own, and cycling through them during combat becomes crucial. However, Masquerada made this simple, and on PS4 I was able to change roles mid-combat without breaking the flow of the fight. Unfortunately, this combat was the one area where things fell flat.

Driven by its script, Masquerada: Songs and Shadows left me laughing, sobbing, and scowling. Reminiscent of older Final Fantasy titles, where the player seems almost to be moving from one cutscene or dialogue sequence to the next, Masquerada thrives on its narrative and complex subplots. It’s so rich that the combat almost felt unnecessary. While it’s a complex combat system that was a bit difficult to understand at first, by the time I had mastered it, I was able to defeat enemies with little trouble, and I found myself repeating the same patterns in every encounter. On the plus side, I appreciated the ability to revive fallen comrades and the way the game automatically switches the lead to a new character when Cicero falls. Also, Masquerada only returns to a previous checkpoint when all characters have died in combat — a lifesaver in some of the bigger boss fights.

The delivery of lore and detail in this game was well balanced by the activity on my part, and I appreciated that I could opt-in (or out)  to be as invested as I wanted. Most of the time, I found myself reading every bit of information I could, collecting every item, and listening to all of the dialogue. When I did skip through, I was still able to follow along pretty well, and the beautiful artwork on the animated panel-style cutscenes kept my attention throughout. However, this style was strangely contrasted by the graphics in the rest of the game, which looked like a more cartoonish, top-down affair of the sort typically offered in older games. Still, the design and graphics were incredible overall and I’d imagine it’s a game worth watching if there’s room on the couch beside the player.

After completing Masquerada, I found myself reeling. Cicero Gavar is an entirely relatable character, and his story is one that I responded to, crying and laughing alongside him. The most amazing thing, for me, was the way the game handles villainy. While it’s quite clear that “the bad guy” is the one who’s killing everyone, there’s a viewpoint in which this character is entirely justified in doing so. It’s just as difficult to pinpoint a clear “hero,” too, and it’s incredible watching characters interact with equal amounts of virtue and vice, responding to each other in ways that seem entirely human.

While the combat leaves a bit to be desired, Masquerada is by far the best story-driven game I’ve played, and I have no doubt that I will play it again. There’s something incredibly valuable about playing something that challenges the way I see the world, and that’s an experience worth repeating, even if I have to plow through a few fights to do it. Rating: 9 out of 10

Disclosures: This game is developed by Witching Hour Studios and published by Ysbryd Games. It is currently available on Xbox One, PS4, Nintendow Switch, PC, and Mac. This copy of the game was obtained via publisher and reviewed on the PS4. Approximately 8 hours of play were devoted to the single-player mode, and the game was completed.  There are no multiplayer modes.

Parents: According to the ESRB, this game is rated T and contains Violence, Blood, and Mild Language. I found this rating to be appropriate, although there were also a few sexual innuendos and much of the content is very emotionally heavy. I would encourage parents to discuss some of the topics that come up in the game with their kids or see that they’re debriefing after.

Deaf & Hard of Hearing Gamers: Subtitles in this game are on by default and I had no trouble playing without sound. There were a few times that subtitles displayed over a character’s head were off-screen or moving too fast to read, but this wasn’t an issue. Sounds are not captioned but visual compensation was ample.