Tyrannosaurs In The Pouring Rain 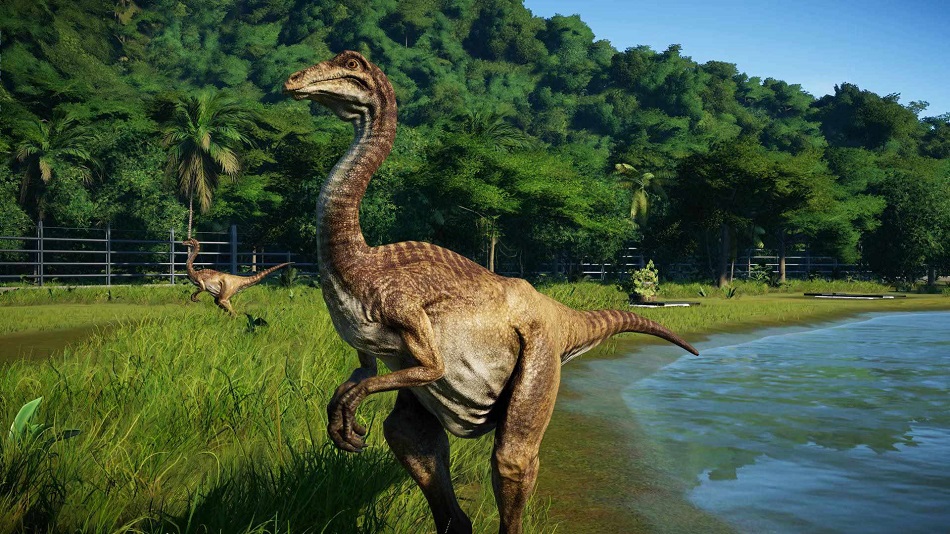 HIGH Successfully maintaining a profit without getting patrons eaten.

LOW Basically using the same strategy on each new map and challenge.

WTF Why would visitors run INTO the broken carnivore paddock???

Jurassic World Evolution should be a wish granted.  Frontier takes their tried-and-true Planet Coaster formula to a logical next step, giving players the ability to learn from John Hammond’s failures and asking them to do better.  The resulting game is equal parts exhilarating and maddening as it provides complete control of running a dinosaur-themed adventure park but forgets to explain the why and how well enough. It absolutely nails the presentation with creatures possessing an unparalleled sense of mass and scale, but limits their interactions with the environment and each other, making them more like cool-looking piles of difficult-to-understand statistics rather than living, breathing, creatures.

Building and managing a park is easy on a technical level thanks to robust and responsive controls. The right thumbstick manipulates the camera, so an unfettered view of the island and dinosaurs is only a few nudges away, while R2 and L2 zoom in and out, respectively.  Selecting a building, animal, or vehicle with the X button immediately zooms in on that item and displays useful information about what’s going on in that portion of the park.  For example, a prompt will announce that a dino is feeding or socializing, or that a ranger jeep is on the way to refill a feeder (or whatever task they’ve been assigned).

Admittedly, scrolling across the entire map can be a bit slow, but pressing the triangle button zooms out to a map screen which makes getting from place to place even easier. Using the PS4 DualShock to place new structures, wall off enclosures, and release new beasts quickly becomes second nature even though Evolution doesn’t do a particularly good job explaining every button press as well as it could.  Keeping guests happy, safe, and spending? That’s much harder, and what I spent most of my time trying to perfect. 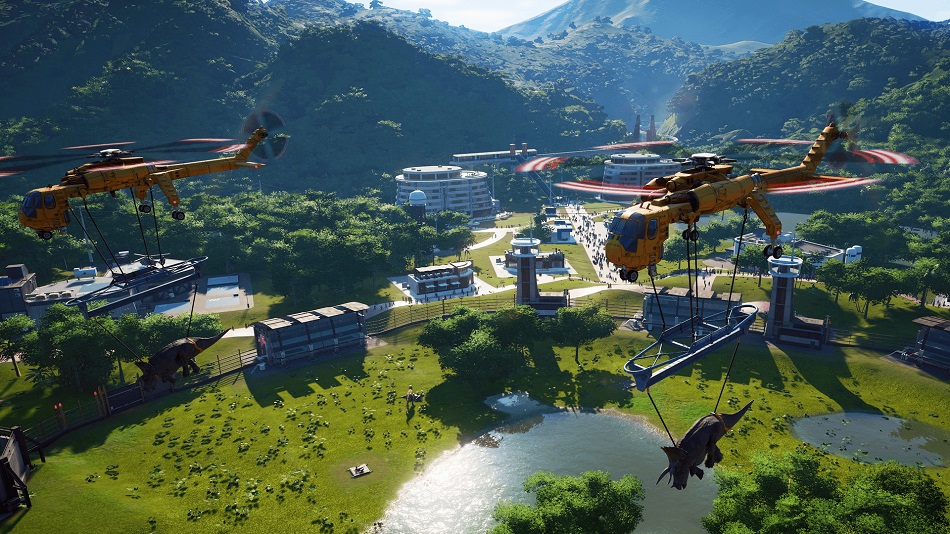 Each of the five islands in the campaign mode is as much a spatial puzzle as it is a business simulation.  As the manager, I need to maintain a solid infrastructure of research facilities so I could create dinosaurs and other attractions to keep the cash flowing in while also working to eradicate potential diseases which could decimate my populations in a hurry. On top of that, I need expedition outposts to explore the world for new dinosaur DNA, rapid response teams to keep animals fed and healthy, and adequate power to keep electrified fences charged even as deadly storms swept through the park. At the same time, I need to keep guests entertained by providing them with amusements such as arcades and bowling alleys and plenty of other places to spend their cash when they’re bored of observing dinosaurs?  Ingrates.

Unfortunately, anyone with limited spatial awareness (like yours truly) is going to make hash of things more often than not, since buildable acreage on each island is quite limited.  Jurassic World Evolution offers landscaping tools to help convert some sections of otherwise-useless forest or coastline into prime real estate, but it relies too much on trial-and-error that leads to frustration when a building I’m desperate to erect just won’t fit where I need it to go, even when I thought I’d eliminated the poorly-defined “terrain constraints”.

The campaign’s story is slight, but well written.  In it, various luminaries from the films provide encouragement and incentives to the new manager as he or she attempts to master both the environment and the dinosaurs.  The story features Jeff Goldblum (who chews scenery with aplomb),  B.D. Wong, and Bryce Dallas Howard reprising their roles of Ian Malcom, Henry Wu, and Claire Dearing. Owen Grady is voiced by a not-at-all Chris Pratt soundalike A. J. LoCasicio. 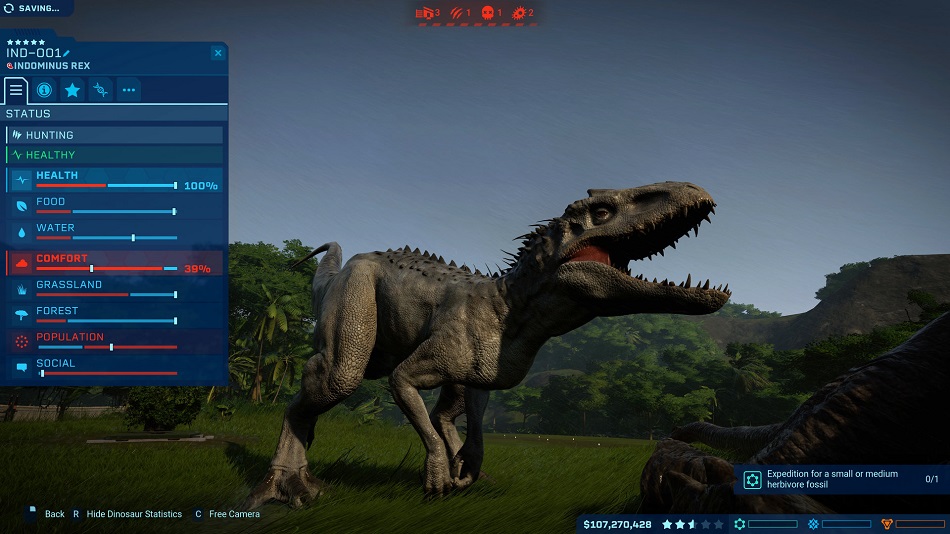 As things progress, the heads of the Science, Entertainment, and Security divisions each offer contracts which infuse the park with additional funds and unlock technology and research, although raising the loyalty of one group lowers the rating for other two — this can lead to dire consequences, up to and including sabotage.  Sadly, there isn’t much variety in contract types, even between groups. Often, they ask for results I simply do not have the ability to provide, such as releasing dinosaurs I can’t unlock yet.

Expanding operations across the five islands relies heavily on finding an early strategy and replicating it in each new location, which becomes repetitive.  Releasing new dinosaurs is always a risk, as it’s difficult to determine what environmental requirements they need to maintain their comfort levels (which prevent them from attacking enclosures and escaping).  Sticking with tried-and-true beasties and enclosure types leads to success, but becomes boring. New buildings like arcades generate income, but I’ve never been able to work out exactly what draws people to them, meaning they’re rarely operating at peak efficiency.  They also generally lack character, making each island look the same after a time.

In the early stages of each map, it can take quite a while to build up enough cash reserves to construct everything necessary to achieve mission goals and there’s no way to artificially speed up time, making what’s already a bit of a slog feel like it’s taking even longer.  Once there are enough visitors and things are going fairly smoothly, money is relatively plentiful — which is good, because that’s generally when everything starts going wrong all at once, meaning expensive repairs, enclosure upgrades (which never seem to be worth the added cost), containment,  and lots of screaming food… er… guests.

One neat feature is the ability to take command of individual ranger vehicles in order to photograph animals, fill feeders, and sedate unruly dinos. However, things can go wrong quickly, meaning I never got to spend as much time as I’d like in these otherwise well-presented mini-activities.  It’s also criminal that I can’t ride monorails I’ve built in the parks, especially considering that this is the team that brought us Planet Coaster!

After all this, the question remains — is Jurassic World Evolution worth the price of admission?  That’s tough to answer.  On one hand, I look forward to “dinosauring” (as I call it) every night, especially after I’d unlocked the challenge-free sandbox which allows me to build the park of my dreams without limits, but unlocking every piece of technology and every species of dino means slogging through an uninspired campaign.  It’s frustrating, but there’s still nothing like watching a newly-hatched T. rex roar her way out into the world. Rating: 7 out of 10

Disclosures: This game is developed by and published by Frontier Developments.  It is currently available on PC, Playstation 4, and Xbox One. This copy of the game was obtained via publisher and reviewed on the PS4. Approximately 22 hours of play were devoted to the single-player mode, and the game was not completed.  There are no multiplayer modes.

Parents: According to the ESRB, this game is rated T and contains Mild Blood and Violence.  This is a simulation game in which players can manage dinosaur parks across an archipelago. Players must build structures/enclosures, manage resources, care for dinosaurs, and monitor guests while completing objectives/missions and managing priorities. During the course of the game dinosaurs can get into fights, lunging and biting each other’s necks. Bites can be accompanied by puffs of blood, and dinosaurs are sometimes shown with bleeding wounds. Dinosaurs can also break out of their pens and eat park guests — after falling to the ground, patrons can be seen getting grabbed and swallowed by a T-Rex.

Deaf & Hard of Hearing Gamers: There are full subtitles for all spoken dialogue in the game.  Subtitles cannot be resized. There is an option to mute non-dialog audio during conversations. Many audio cues are accompanied by subtle force feedback/rumble from the controller, but these cues can be missed. 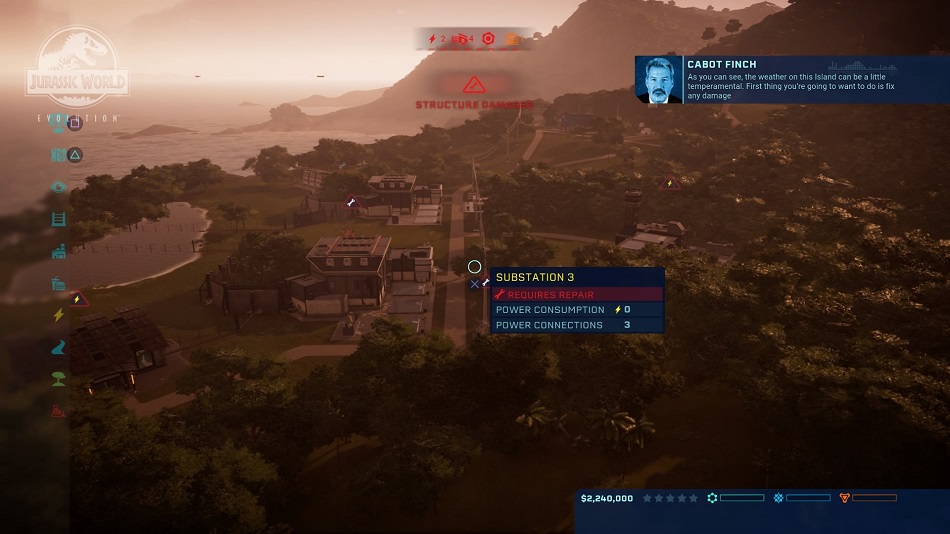 Remappable Controls: Certain functions are remappable, such as inverting the camera axis. 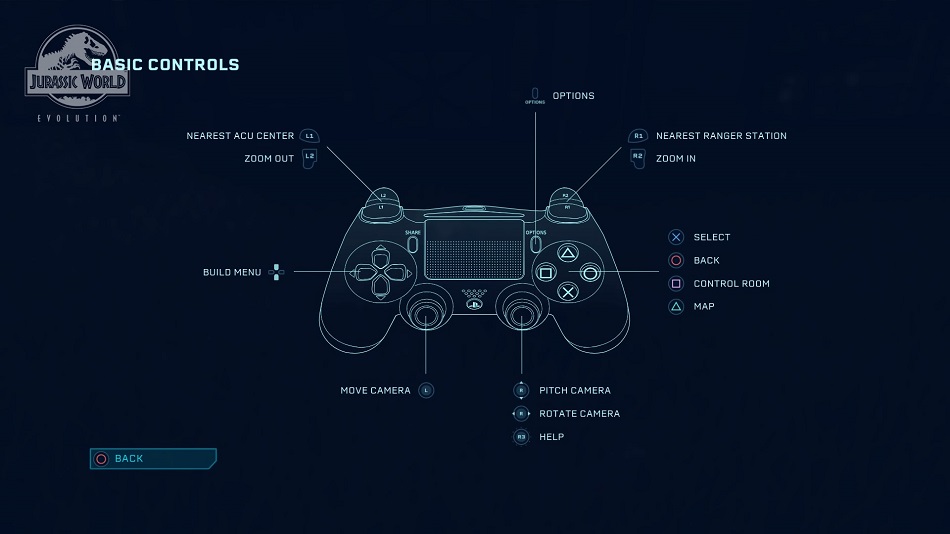 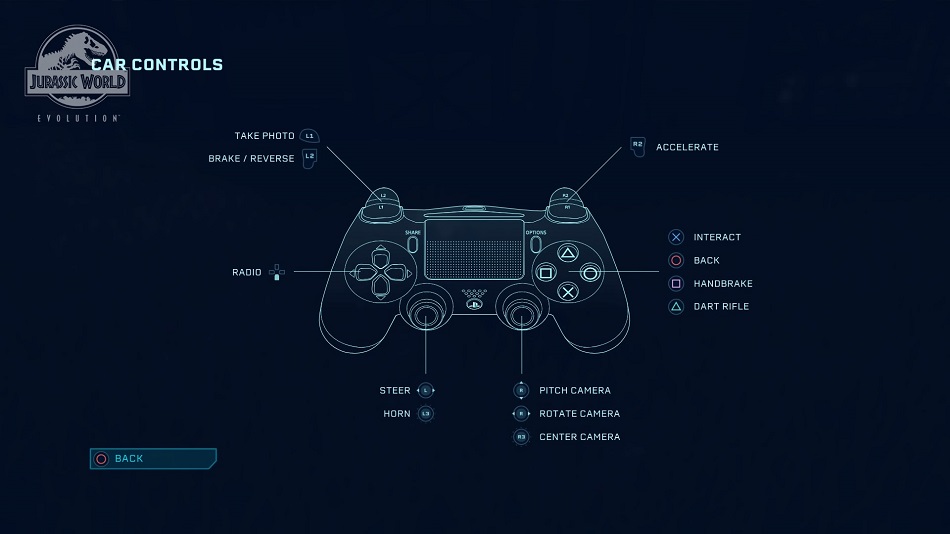 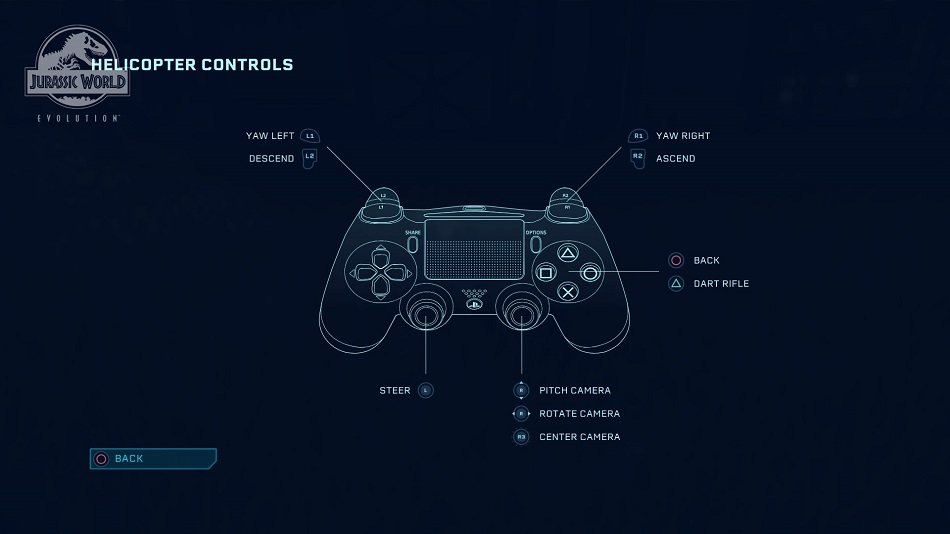 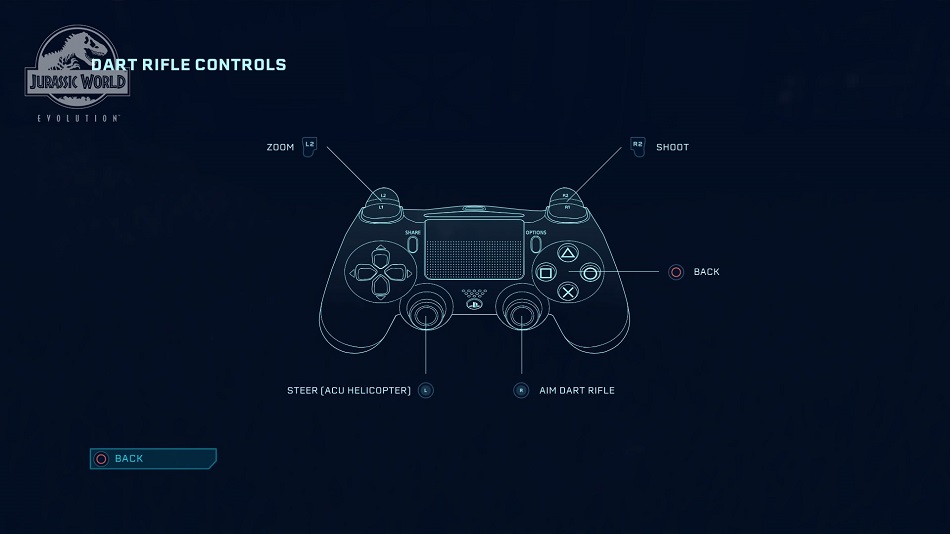 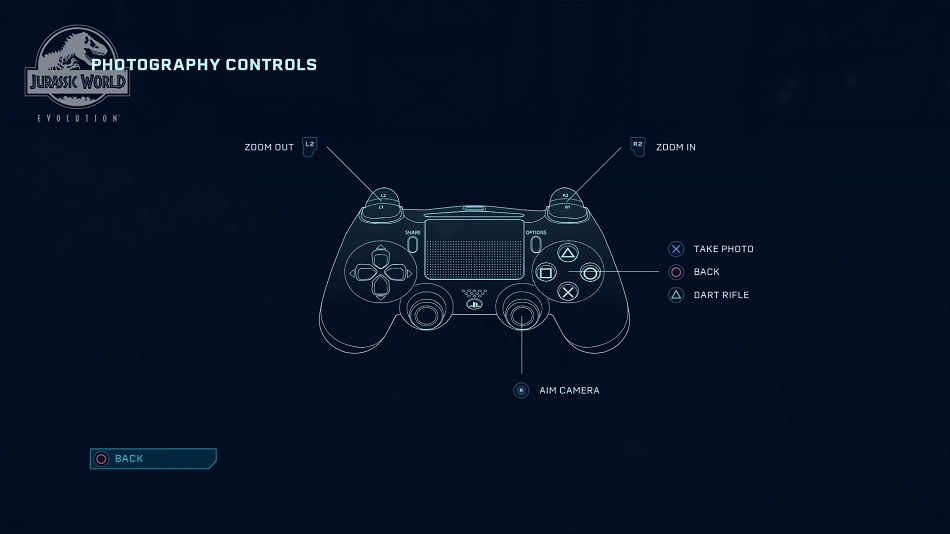 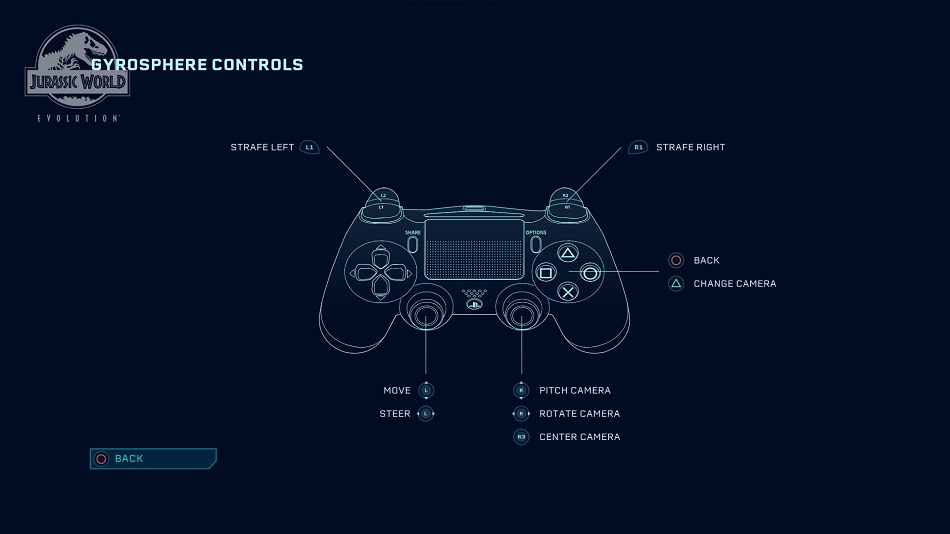