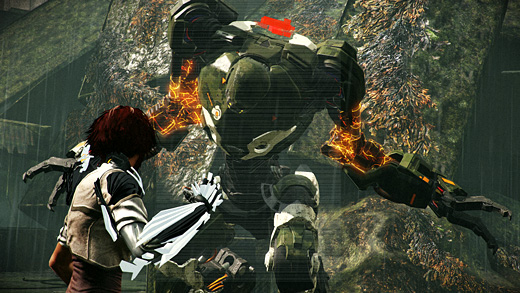 Completely new intellectual properties are a rarity these days. New ones starring female lead characters are even rarer. Thanks to Capcom picking up publishing duties, Remember Me from French developer DONTNOD Entertainment will be making its way to the United States on June 4.

In addition to satisfying both of those criteria, It also looks like a great action title with some interesting ideas, so Jean-Maxime Moris, co-founder and creative director of DONTNOD Entertainment was gracious enough to answer the questions we had about the dynamics of crafting a female-led title and how the game's "memory" theme applies to gameplay.

Who are the members of DONTNOD, and what are their backgrounds? What is their collective previous history in making games?

DONTNOD Entertainment was founded in June 2008 in the heart of Paris by Hervé Bonin, Aleksi Briclot, Alain Damasio, Oskar Guilbert and myself Jean-Maxime Moris. We have grown steadily since then and now have just over 70 members of staff.

While Remember Me is the studio's first title, it is being created by a team with experience of working on such titles as Alone in the Dark; Heavy Rain; Ghost Recon Advanced Warfighter 2 and GTA3 as well as artistic lead Aleksi Briclot whose previous work includes Magic: The Gathering  and Marvel Comics.

What was the origin of creating Remember Me? What type of new experience does the game aim to bring to players

As a new studio we needed to prove our credentials to publishers and the only way to do this was to create a brand new title. Given the team's previous experience we were most comfortable developing an action-adventure title, but to stand out from the crowd it had to offer something new. Remember Me does this in a number of ways.

First off we have the overriding principle of memory gameplay which is at its most evident in the memory remix sections but is also prevalent in other ways. The setting itself is pretty unique as there aren't that many games that have used Paris, or our version of it, as a backdrop. Furthermore we have the Combo Lab which adds a level of depth to the melee combat that has not been seen in the genre before. 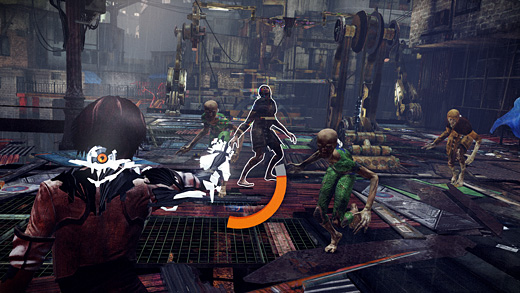 It was said that the game was originally a Sony-produced exclusive before they cancelled it. What happened?

Sony had to cancel a bunch of titles for their own reasons back in 2011, and I am sure you can appreciate I can't really go in to any details on this. The quality of the game was never questioned though, and we are still in very good terms with Sony. However parting ways offered us the opportunity to explore other platforms and give more gamers around the world the opportunity to step into Neo-Paris 2084.

It was reported that the elements of memory and identity were not part of the original concept. Is that true, and if so, how did the game grow to incorporate these abstract elements?

Yes, once upon a time the project was something entirely different and known as "Adrift." It explored the theme of global warming. But then we began to think about the recent explosion in the use of social networks and began to wonder what could happen if this ability to share experiences became even more prevalent and reached a point where you could digitize these memories and no longer simply share but actually trade and purchase them. This was when Remember Me became the game it is today.

The game was written by Alain Damasio and Stéphane Beauverger, both science-fiction novelists rather than merely in-house writers. How did this shape the game, both in terms of story and design?

Alain and Stéphane brought very different skills to the table.

Alain is our narrative director and one of the co-founders of the studio. He had never worked in games before and brought a fresh eye to everything we were doing, which was a very positive driving force. He and a team of narrative creators he recruited basically laid the foundations of the game's universe from a narrative perspective. They created a believable and exhaustive background for game designers to draw inspiration from. The original so-called narrative bible was over 1,000 pages long!

As for Stéphane, he was part of the original narrative team and took over the role of lead writer during production, while Alain went away to start writing his third book. Stéphane worked hand in hand with game designers, wrote the scenario and dialogs. He also played a big role in designing the memory remix sequences, which essentially fuse narrative and gameplay. 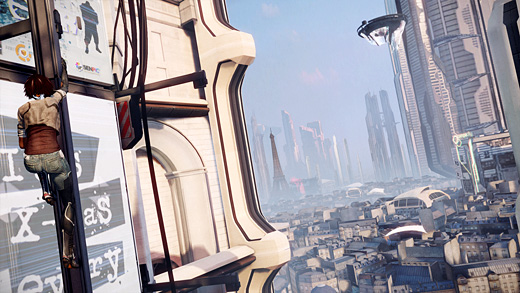 Given that the vast majority of protagonists in video games are male, why did you choose to go with a female character?

We probably wanted to differentiate ourselves from other cyberpunk games as well, but that was not really a conscious decision. With all the debate now around female leads, I am happy to call our decision a subconscious militant act.

It was reported that DONTNOD was turned down by several publishers for the primary reason that Remember Me's main character is female. Were you surprised by the amount of resistance you met on this issue, and what do you feel it says about the industry today?

The "female character doesn't sell" prophecy is very much a self fulfilling one. It has been hammered onto so many people for so long that people now take it for a given and will be reluctant to spend money on marketing a female lead. Which then makes female leads less successful and makes people want to invest even less. It is a vicious circle that takes courage to break. I like to believe that there are young marketing executives out there who love challenges and off-the-beaten track paths. They will be the ones changing the industry. Developers can do that too, but it will take more time!

The videos I've seen of the game are dynamic and action-packed, but the story is about memory and identity. Apart from the "memory overload" attack (which appears to blow an enemy's brains out) how do these cerebral elements factor into the gameplay?

The memory gameplay mechanic forms the backbone of Remember Me and consists of the following elements:

Memory remixes: Interactive sequences used at key moments in Remember Me's story, where players play an active role in driving the narrative forward. During each memory remix the player will be able to move the action backwards and forwards, looking for memory glitches, elements which can be altered to change the outcome of the memory. This in turn changes the entire personality of the person in a butterfly effect manner.

Combat: The more Nilin fights, the more combo moves, known as Pressens, she remembers which in turn allows the player to create longer combo chains in the Combo Lab. The memory overload move you mention isn't tied to the Combo Lab, but is a finisher where an enemy's memories, not their brains, are forcibly deleted.

Other elements include Remembrane sections where Nilin must follow the memory shadow of allies or defeated enemies whose paths provide access to Nilin's objectives and of course the story that follows Nilin as she pieces back together her own memory. 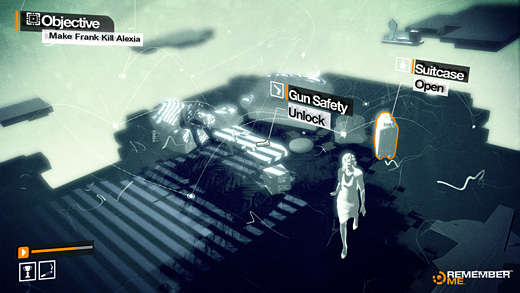 Some members of your team worked on Splinter Cell and Rainbow Six, two games that demand a certain level of patience and planning from their players. Besides the action of Remember Me we've seen, can players expect such strategy outside of the action-packed moments?

Remember Me includes environmental puzzles as well as some moments of "hide and sneak" where players will need to avoid drone detection zones, but does not feature any stealth component.

When was the game's location chosen? With such a famous design and architecture, how did it feel to approach the redesign for the Paris of 2084?

Originally we thought about setting the game in Asia or North America, but soon realized that we had in Paris a location that not only was underused in videogames but was where we all lived and worked making the research pretty easy.

When it came to designing Neo-Paris we took Paris as it is today as our starting point and then overlaid futuristic elements so familiar landmarks such as the Eiffel Tower and the Haussmannian architecture remain but are complemented with all new buildings. This is carried through on the city streets where you will see traditional Parisian stores but chalkboard signs showing the prices for baguettes or croissants have been replaced with digital displays.

This grounding in the here and now was central to the design ethos for the whole game as we believe it is easier for players to be drawn into a world if there are contemporary elements for them to anchor to.

If you only had one sentence to sell Remember Me to players, what would you say?

Infinite thanks to Jean-Maxime Moris of DONTNOD and to Jen Chong for her assistance in making this interview happen. Questions provided by Brad Gallaway and Christopher Floyd. Look for Remember Me to hit stores on June 4, and look for the full review coming soon.