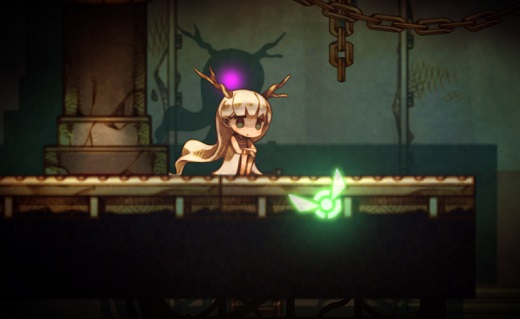 HIGH The light and shadow system creates some clever puzzles.

LOW A few moments of trial-and-error thanks to artificially high difficulty.

WTF All those little girls’ corpses hanging from trees.

Hotaru no Nikki (stylized as htoL#NIQ and translated as The Firefly Diary) casts players in the role of Mion, a young girl with horns who awakens in a strange world with no memories of her past. Guided by a pair of fireflies, she sets out to discover who she is and how she came to be there.

Based on that description, players might assume this to be a sweet, family-friendly adventure with a few dark moments—basically, a coming-of-age story for Mion. The storybook-inspired hand-drawn background art, ethereal music and moe design of Mion only strengthen that presumption.

That assumption changed once I reached the end of the first chapter.

Shortly after Mion embarks on her journey, it’s revealed that the world is much bleaker than expected. Plant life has grown wild and entangles long-abandoned buildings. Bizarre monsters lurk within the shadows, eager to strike at helpless victims. Corrupted versions of objects from Mion’s past life, and even lifeless bodies that resemble her, taunt the implication that something horrible happened before she awoke. It’s a grim, often disturbing world that still has an eerie beauty somewhat reminiscent of Limbo.

Without wishing to spoil too much, htoL#NIQ is a sorrowful, chilling look at obsession, fear of abandonment, and how grief after loss can drive otherwise rational people to drastic measures—and it’s all conveyed effectively without a single line of spoken dialogue. However, the backstory is only revealed by collecting ‘memory fragments’ hidden in each stage, so players will need to work to uncover the truth. It’s not an easy task, though—the game can be surprisingly challenging.

After the first chapter, players are thrust into one hazardous level after another. There are a variety of deadly traps like moving sawblades, crushing pistons, carnivorous plants, and flamethrowers. Additional dangers arise from the shadow monsters which pose no danger to Mion’s body, but kill her if they come into contact with her shadow.  Of course, the game engineers many situations where there will be a physical hazard on one side and a monster threatening her on the other, requiring quick action to avoid falling prey to either.

Navigating these hazards is made trickier since players have no direct control over Mion. Instead, they must move one of her companion fireflies (named Lumen) to dictate her actions. Mion will walk in whatever direction or interact with anything Lumen highlights. It should be noted that while Lumen’s speed is dependent on how fast the player drags him, Mion always moves at the same pace. This differential needs to be accounted for when dealing with the timing of moving platforms and such.

Raising the difficulty of this setup is that players will encounter switches and machines that Mion can’t get to because of some obstruction. In these situations they’ll need to utilize her other firefly assistant Umbra.

Umbra can move through the shadows cast by objects in the environment to reach and activate distant devices. Being in shadow can also reveal hidden areas and can stun or disorient monsters that harm Mion. There is some inconsistency in how these mechanics operate though… Umbra is only able to pass from one silhouette to another if they’re touching, yet in some cases the game allowed for a slight gap. In other areas, a sliver of space prevented me from moving between them.

These two mechanics also affect each other since many of htoL#NIQ ‘s stages require effective use of both fireflies in order to progress. For example, moving Lumen to different areas of the screen alters the angle and direction of shadows, and can create new paths for Umbra to travel through. In the late-game, moving Lumen over certain flowers changes their facing as they follow its light, and the plants can be activated by Umbra to fire seeds at monsters.

As creative as this shadow system is, there are times when it feels like victory is dependent on luck, rather than mastery. For example, there’s a section where Mion is on a moving platform heading towards columns of sawblades. To deactivate them, I had to move Umbra through shadows to reach a switch. The problem came from getting the timing exactly right and having Lumen in the perfect position so that the shadows would form a proper bridge. If I was even slightly off on the timing or the angle, there’d be a gap in the shadows and I couldn’t succeed. It took me 20 minutes to get through this segment, and the only thing that mitigated my frustration was the checkpoint right before it.

Another issue is that htoL#NIQ seems to run out of ideas (and content) too quickly. Aside from a hidden ending there are only four chapters, each with three stages and a boss fight. Since the first chapter is mainly a tutorial, finding that the rest of the content doesn’t offer any real change in execution or any new surprises is a letdown. Most disappointing is that the final chapter is more of the same again, just with traps and auto-scrolling segments.

While the game is relatively short, it ends before overstaying its welcome and the difficulty in many stages means players won’t be breezing through on their first pass. It also makes up for its brevity by providing strong atmosphere and an intriguing story. Despite the issues I had with it, it’s worth seeking out every one of Mion’s memories and uncovering how this little girl and her fireflies ended up in such a dire situation. Rating: 7 out of 10

Disclaimer: This game was obtained from the publisher and played on PC. Approximately 6 hours of play were devoted to the campaign, and it was completed. There is no multiplayer mode.

Parents: This game has been rated T by the ESRB for containing blood and fantasy violence. Blood splatters on the screen whenever Mion dies, though her body is never shown mutilated or damaged in a grotesque manner. Some of the events depicted in memories could be unsettling to young players.

Deaf and Hard of Hearing: There is no in-game dialogue; the few instructions for how to play given in the first chapter are provided as text. Audio cues are not necessary to complete the game, though the second boss has a special attack telegraphed by a roar, so not being able to hear it could make the fight more difficult.

Colorblind: This game does not offer a colorblind mode in its options. This could make navigating shadow segments harder for some players if they cannot distinguish where the shadows end or start.