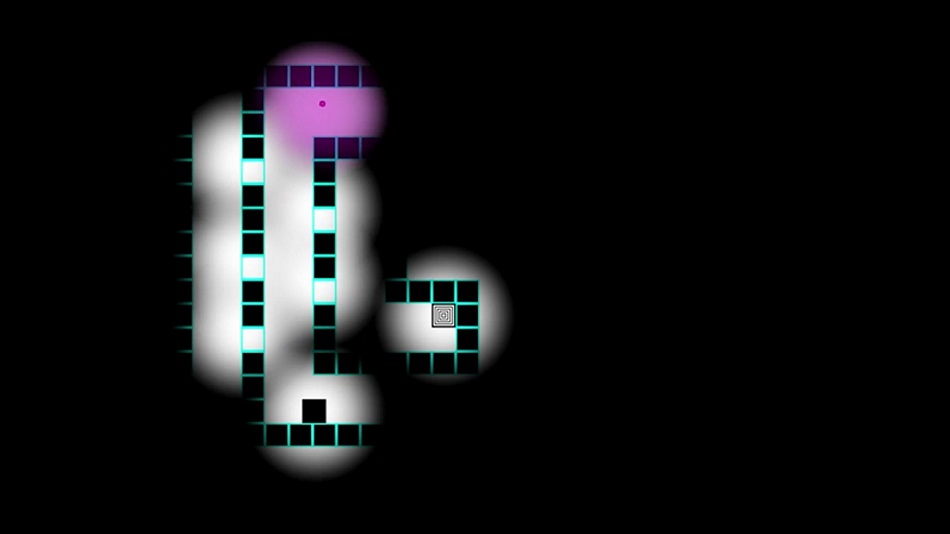 HIGH The first boss dashing my square to pieces over and over.

LOW Everything about Level 74.

Game difficulty seems to have boomeranged back to a time when developers giddily anticipated the screams of players as they once again die for the hundredth time. If Halo represented a softening of challenge with its replenishing shields, then Demon’s Souls and Super Meat Boy marked the return of teeth-clenching, controller-smashing gameplay – and players (mostly) rejoiced.

Glo, an indie platformer released for PC via Steam, reflects the continuing trend of providing challenging difficulty, but this time with the added twist of turning off the lights. With only the square the player controls and the bullets it can fire illuminating the way, Glo ramps up difficulty that at times capitalizes on its shadowy premise, yet also misses an opportunity to outshine other platformers.

Glo is not just the title, but the name of the square protagonist, and it hops and wall-jumps with surprising dexterity given its shape. Glo can continually bounce up walls to reach high ledges, has a floaty quality that allows some precision on landing, and a second jump that, while smaller, gives needed maneuverability.

Glo can also shoot a small bullet of light that functions as both a means to see what dangers lie ahead and it obliterates foes, but the mechanics were a bit fiddly — when playing with a controller, the bullet often soared past enemies, the joystick providing a poor sense of where a bullet would head. While maneuvering around enemies is certainly possible, later stages that require using the weapon feel tough not because of level design, but due to an innate lack of precision.

When viewing Glo from a wider perspective, the general challenge vacillated wildly. Of the game’s four acts, the first two proceeded evenly, taking the standard route of introducing a new mechanic and then having the player practice and master it. While these stages presented a challenge, they never felt unfair. Later acts introduce not only new mechanics, but increasingly challenging jumps, tough enemy placement and length entirely too long for the accuracy demanded of the player. The steady progress that defined more than two-thirds of Glo‘s campaign ground to a halt, and completing later levels felt like a chore rather than conquering a fair challenge. 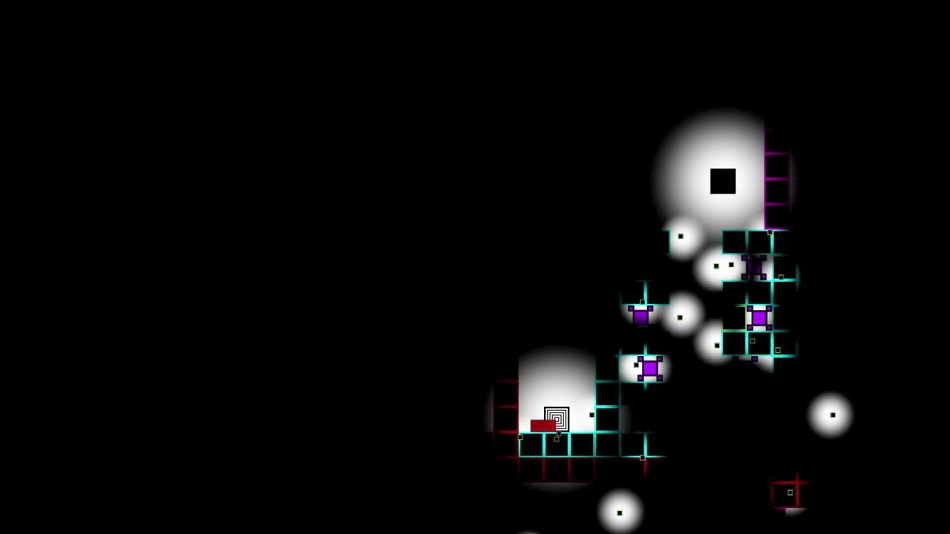 Before I’m pilloried for ‘sucking at videogames’, let me say that Glo sells itself as a title that requires “blind faith” from the player, ostensibly because Glo must be led through darkness to reach the end. One might reasonably expect to rely on both quick decision-making skills and the ability to shoot light to plan a path, but after my fiftieth death in a given stage, the layout of was no longer a mystery, just a test of muscle memory and timing – the darkness became inconsequential. The stages that forced blind leaps or the use of light that explodes from enemies and blocks to reach the end of a stage represent what Glo can do with its premise; and they do appear — just not often enough.

Glo also claimed to have a story that provides an “emotional rollercoaster” of an experience, but it never quite delivered.

Navigating Glo through an unknown environment, someone else makes their presence known early on by writing on the walls of some stages. Claiming to want to be your friend, this unknown person quickly turns to threats and insults. Initially menacing to read, the threats quickly became vapid as reading different versions of “I will kill you” lost their ability to induce fear.

Collectible memories scattered throughout provide the perspective of someone else who’s traversed the dark world of Glo, but reading the content of the memories requires the player to exit the game and return to the starting menu. Separating game and story flies in the face of the unique experience videogames can provide by telling stories as one plays. This aside, I also found myself uninterested in searching for every last one in order to get the complete message.

Glo treats its one unique feature – navigating a darkened world as a square capable of producing light – with equal parts playfulness and disinterest. At times, I controlled Glo through a battalion of boxes that exploded in a dazzling display of fireworks. Using the light created, I planned my next move as I descended downward into unknown depths. Other times – far too often – a mistimed jump sent me back to the beginning of a stage that I had grown too familiar with to enjoy any longer.

While some players may enjoy the steep difficulty, little else makes Glo stand out. Rating: 6 out of 10

Disclosures: This game is developed and published by Chronik Sparten. It is currently available on PC via Steam. This copy of the game was obtained via a Steam Code and reviewed on a PC. Approximately 3 hours of play were devoted to the single-player mode, and the game was completed. There are no multiplayer modes.

Parents: This game has not been rated by the ESRB, but the game contains mild violence and dark themes. The square controlled by the player and enemies explode into orbs of light, and threats of violence are made to the main character in this game.

Deaf & Hard of Hearing Gamers: Sounds are not crucial to playing Glo, although certain audio cues co-occur with events, such as a bullet hitting a wall.

Remappable Controls: No, this game’s controls are not remappable. It can be played with either a keyboard and mouse or compatible game controller.