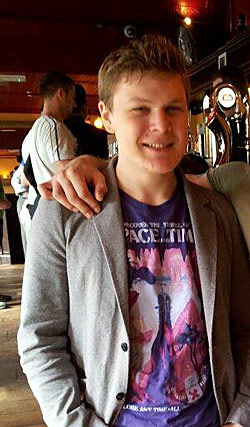 Who are you?
My name is Gary Howard, a 20 year old British student of game design and lover of games and the industry. Also a massive geek with too many video game-related t-shirts to wear.

Where are you?
I was born in the UK and I currently live in the great capital of London, well the poor, weird and high-in-crime end of it that is the town of Lewisham.

Where are you from?
I was specifically born in East London and lived in the county of Essex for eighteen years, and if you were British and watched enough British TV, you will know how bad Essex really is—the New Jersey of Great Britain respectively.

What do you do for a living?
At this very moment of writing this, I am an unemployed student bum, but I did recently secure a part-time job at my local video game retailer and will be working very soon. Good times.

What kind of gamer are you?
I suppose I am a bit of every gamer from a hardcore to a retro one. I used to be heavily into online multiplayer a few years ago, but then got uninterested and invested more time in amazing single-player experiences. And once a month I play something retro, either on my Sega Mega Drive or Nintendo 64, because I'm the King of Cool. I also dabble into the mobile games too and most of them are casual hence making me a casual gamer also.

What games made you into a gamer?
The first game I ever touched was Alex Kidd in Miracle World on the Sega Master System at the age of two. However it was Sonic the Hedgehog that got me into games and made me the gamer I am today. I was wowed by the speed (oo Blast Processing), the music, and the level design of these games and still play them during my monthly retro play sessions. And don't ask me on how I feel about Sonic's transition into 3D, I beg you. It was Banjo-Kazooie on the N64 though that introduced me to another side of gaming I didn't see at that age. The large and open world you walk/run/fly around in, how amazing it looked at the time and still is now really. Also the amount of stuff you could do in this game really intrigued me and that is why it is my favourite game of all time…well, that and Portal. These games are perfect. Games are great. As I started to get older, more games are introduced to me, and all from different genres, from first person shooters to lengthy RPGs to tournament fighting games filled with nonsensical plots and rather attractive women with oddly-sized bosoms. My top five video game genres today are: 1) Action/Adventure 2) First Person Shooter 3) Role Playing Game 4) Puzzle 5) Fighting.

Why do you game?
Like when I watch a film, I want to be entertained. I want to get sucked into a great story, get interested in characters that are well developed and try to get a sense of enjoyment out of it all. I enjoy Banjo-Kazooie because it's incredibly funny in a really silly way and has some really amazing gameplay mechanics and design choices to go with it, and the same applies to Portal. Emotionally investing myself in the really well-written game and laughing at the vastly clever dark humour GlaDOS throws at you. Even learning and enjoying the incredible unique puzzle mechanics it has, that alone makes it the best puzzle game since Tetris. Overall, playing a game fills me with great catharsis and stops me going insane or being bored to death. I am one of those cynical British men that pretty much hates a huge percentage of everything in life, but in that remanding percentage are video games…and films…and tea.

Who is your video game character soul mate?
Ok, this is a tricky one because I don't really have a favourite video game character per se. Having a spiritual connection with one though, hmm….I suppose I would have to go with Zevran from Dragon Age: Origins, which is also one of my favourite games all of time. Why Zevran, you ask? He's a sexy and flirtatious elf assassin. What's not to love. I found him to be one of the most interesting characters in the game and enjoyed hearing his dialogue, so much bi-sexual flirt talk can be quite funny at times. I sometimes flirt with my friends in real life for no real reason other to show how bi I am and to see if I can get away with saying these types of quips. Also he's an elf…I like elves. He's an assassin and I've always been the sneaky and stealthy type in RPGs. My elf character even pursued a "relationship" with him in the game and found him to be the more interesting companion to have one with compared to having one with Morrigan or Leliana. Plus, softcore elf cutscene porn…enough said.

Why are video games art?
Video games are art, and by the way I recently purchased that t-shirt with the saying from your online store, you're welcome. Games is an expressionist medium, like film, the director or creator is trying to pass his vision onto us, the audience and saying, "hey, look at my product, look at our world, and look what you can achieve within this world". Obviously games differ from film as they are interactive. You can 100% say yes to video games being "art" on the technical aspects of it, just look at any game that comes out on the Xbox 360 or PS3 or PC today. It's more about what's in the game though, not what engine was used to create it, etc. The graphics or aesthetics of a game do play a major part in a game being defined as art. Looking at a game like ICO or Shadow of the Colossus, a huge world you can walk through, alone, seeking something of worth, feeling a slight emotion when you kill the colossal giants, does it make you happy or does it make you sad? Like film, games are able to tell great storytelling to the point that sparks an emotion, whether positive or negative, from you and that is a creatively-made game right there. And that's art defined: something made with a notion of creativity and that creativity is then praised, by the people that create the art and those who interact with it.

What do you love outside of video games?
I'm very passionate about films, par to video games. Love them so much that I have a backlog of them AND video games to get through ha. I also like to watch the occasional HBO drama or BBC comedy now and again—American and British. I'm also a complete time-travel nut. Any film, game or show that has any association with time-travel in it, I am there. Back to the Future trilogy—the most awesome film trilogy ever, that and Star Wars (original trilogy obviously) and Lord of the Rings. Or I'll be up London, going to game conferences, socialising and getting drunk with fellow indie developers, journalists or anyone in the industry. If I can't afford a trip up central London though, then I'll pester them on Twitter. One last thing…I'm Batman!

There you go, I hope this is interesting enough for you. Also I know there isn't a question there that asks what my favourite games/series of all time are but I'm going to list my top twenty right here anyway:

Also, finding a photograph of me smiling is extremely rare, because I have a tendency of looking cross in front of a camera haha. I have one of me smiling though and I'm wearing a time-travel related shirt, surprise surprise. 😀

I didn’t expect it to go up that quickly let alone go up at all, so thank you. Reading it back, I really do ramble haha. And I have to wait like a month for the shirt to arrive – international posting, meh. Anyone reading this who fancies a chat about games, game design, films or anything really, you can find me on Twitter under @Gazanat0r or if you actually want to talk, then add me on Skype under the name: gazanator101 So again, thank you GameCritics, you guys really are awesome. And I don’t really need to remind you… Read more »