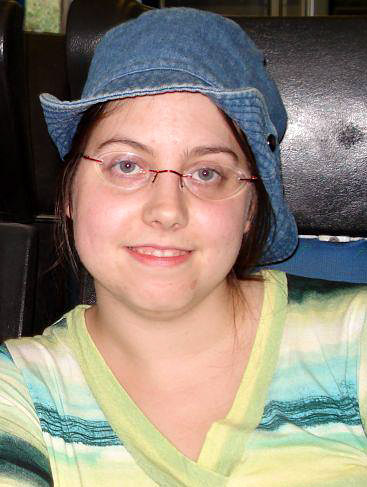 Who are you?
I'm Gaia Steinbuch.

Where are you?
I'm live in Helmond, a small city in the Netherlands.

Where are you from?
I'm from the Netherlands.

What do you do for a living?
Currently I'm a (master) student in Chemistry..

What kind of gamer are you?
I'm interested in lots of different types of games—but my favourite genre would have to be role-playing games (RPGs) and older real-time strategy games (RTSs). I mostly play single player games (I like a game with a good story), sometimes co-op with my boyfriend. I never play multiplayer with strangers, it doesn't appeal to me. I prefer to play games in shorter periods of times because I get tired easily. I play most of my games on the PC but I also own a PS3, Wii and DS on which I game now and then.

What games made you into a gamer?
When I was a child, we used to have a computer and a CD-i. I know the CD-i failed as a console but I spent many happy hours on it, as well as on the computer. My favourite games were the Zelda and Link games (which everyone else say are rubbish, compared to Nintendo's Legend of Zelda at least). I played a lot of old DOS games on the PC, such as Supaplex and Commander Keen. My first big RPG was Final Fantasy X on the PS2.

Why do you game?
I mostly game because I want to see a good story. I also game to escape from reality, to experience something beautifully crafted.

Why are video games art?
Video games have design, atmosphere, music, visuals, why wouldn't they be art? They can make you think about things, they can engross you and capture you in their world.

What do you love outside of video games?
I love to read books (novels, fantasy, science-fiction). I also like to spend time with our animals (dogs, goats and chicken).

Yeah, I have no idea how you guys manage with prices like that. $60 seems outrageous already — there’s no way I’d pay 70 euros for most of this crap.

I’m sorry that I forget you guys have it even worse — I try not to be a self-centered American, but it’s hard. 🙂

Yes, and if I may, it makes me chuckle every time you guys bitch about games being too expensive at 60 bucks since in Europe they are about 70 euros (92$) nowadays. And no, we don’t earn more money !

Heh — I was noticing the same thing. I like that we have a more international audience, though.

Is it just me or does this site have an awful lot of them lurking in the shadows?
They’re probably attracted by the orange banner 😉