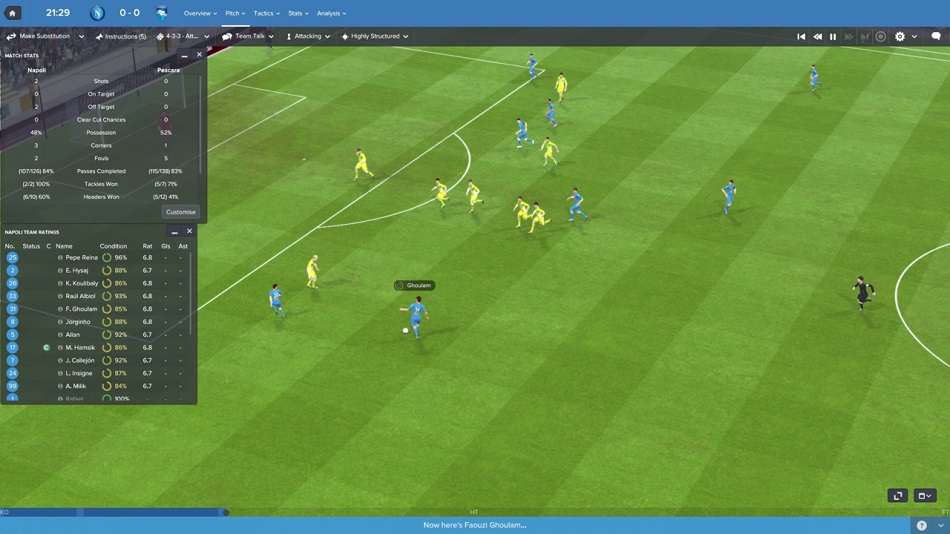 High: Scoring a 90th minute victory in a must-win cup game and celebrating.

WTF: Truly believing your accomplishments belong on a CV.

Football, or “Soccer” as it’s known in North America, is the world’s most popular sport. That popularity has brought countless videogame interpretations over the years, yet none have maintained the legacy of Football Manager. It’s a history that goes back over a quarter of a century to the precursor to it all, 1991’s Championship Manager.

Legacy only accounts for so much, however. While many franchises have crashed and never been seen or heard from again, it’s the steely consistency of Sports Interactive’s releases over the years that sets it apart from the pretenders, and a big reason why I’m reviewing their latest so many years after their first.

Football Manager is a management simulator which can take things to the nth degree, allowing control over match-day teams, tactics and training, transfers and scouting for new talent, interviews in the media, conversing with players and even managing team morale. If someone can name a role that may be a part of a real manager’s job, then chances are it’s something to be undertaken here.

Some have dubbed Football Manager nothing more than a spreadsheet — a database for football nerds who follow the minutiae of statistics. Trying to distance themselves from this image, the devs continually update and enhance their presentation, and they’ve perhaps hit the zenith of design in the franchise here. Enhanced user-friendliness is sure to appeal to those who’ve always wanted to play but have found it incredibly intimidating and confusing. At the same time, the improvements won’t alienate long-term veterans. 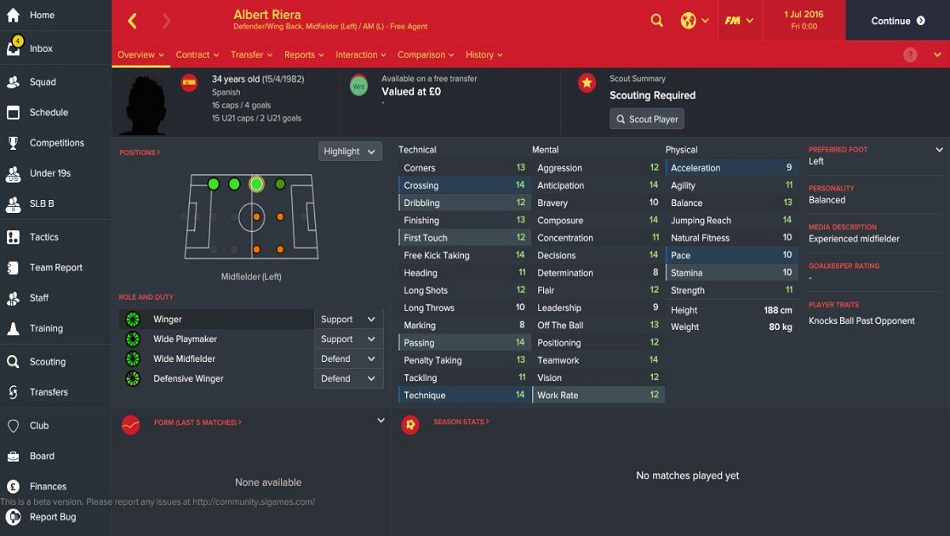 Football Manager 2017 immediately greets players with the first change — a subtle alteration on last year’s 3D generated managers. Adding a photo will prompt the game to attempt to create a 3D representation of the player, albeit with mixed results. It’s a nice concept and feels more personal than the bland avatars in the FM2016 release.

The other most noticeable change is to the interface, or more specifically, to the way information is relayed to the player. This isn’t the first-time Sports Interactive has tried this, but this year’s release is certainly the most successful. Player reports from the staff are now more informative, and recommendations (and the reasons for them) are given without having to organize staff meetings. Scouting, probably one of the weakest areas of the series, is now improved by coaches coming with requests to scout certain regions or positions based on their perceived weaknesses in the squad, removing the possibility of the player simply forgetting to set up scouting altogether — an issue in past releases. Feedback from the club’s board, supporters and journalists all feature regularly, and the addition of social media adds a sense of immediacy via feedback from the fans.

Apart from the UI, improvements have been made in other aspects. For example, the 3D engine now features 1500 new motion-captured animations, the AI calculates their decisions at almost double the previous rate, and players now have full pre-match rituals. Whilst the core game remains the same, it’s become far more enjoyable to watch.

There are of course, new features and things that haven’t been seen in the series before, such as the impact of Brexit, both financially and in regards to transferring players to and from other countries when managing clubs inside the United Kingdom! It seems the Sports Interactive are better equipped for the impact of Brexit than the British government.

Football Manager 2017 is no revolution, but it doesn’t claim to be. The franchise is, instead, built upon careful revisions and tweaks to its successful formula, bringing new feature sets on top of the base game loved by millions. It’s these millions who purchase it every year, and continue to support a developer who continues to push themselves with every release, improving their formula and giving fans the best possible experience — whether managing a world powerhouse or a lower level team just trying to balance the books, the decisions made are never easy, and genuine pressure exists. Football Manager continues to capture the essence of what it is like to truly love, fear, hate and live football, like no other ever has. Rating: 9 out of 10

Disclosures: This game is developed by Sports Interactive and published by SEGA. It is currently available on PC and Mac. The copy of the game was obtained via publisher and reviewed on Windows 10. Approximately 50 hours of play were devoted to the game.

Deaf & Hard of Hearing Gamers: Sound is necessary for successful play, and all commentary is text without audio.

Remappable Controls: The game is played through Mouse and Keyboard only. Barring data entry, the game is fully playable using the mouse.

Colorblind Modes: There are no colorblind modes available in the options by default, but the game does allow custom themes.

It’s worth noting that there’s a demo available for those who wish to dip their toe in. I downloaded it recently, got as far as the title screen, and then closed it down as I was afraid of the commitment. I have a bit of time now so I may try it out.

That said, maybe I won’t. My brother is a recovering Football Manager addict, who even had it installed secretly on his work computer once. When I ask him about it, he shakes his head and mutters, “A bad business.”