Chatting With Noel And Barbara 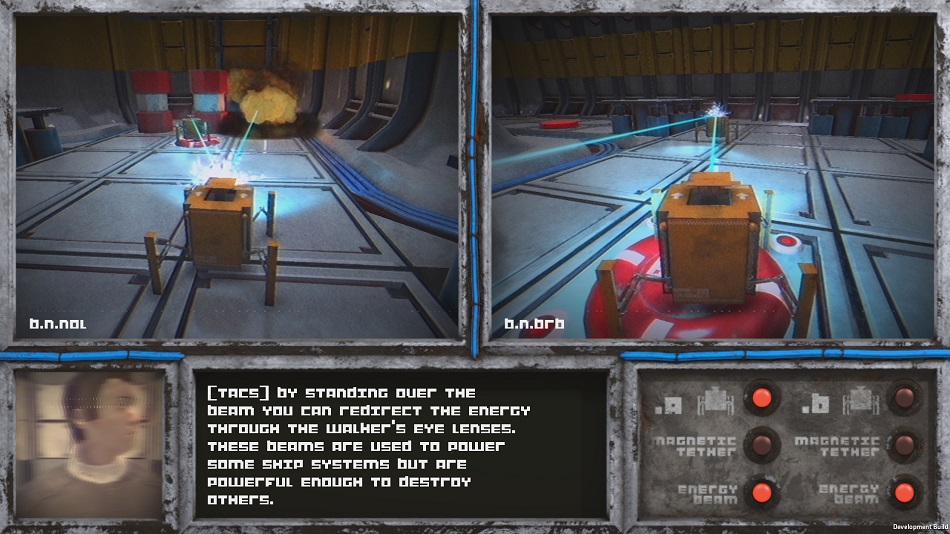 HIGH Each stage ending with a “conversation” between Noel and Barbara.

LOW Did no one think to use any other paint color besides brown?

WTF Are the collectables for?

“Welcome aboard Factotum 90! While corn and space basil usually appear on the dinner menu, an unknown object has collided with our unnamed ship, and only a pair of intrepid, crab-like robots can save us from suffocating in the black ether of space!”

Such is the setup. Factotum 90 checks all the boxes a puzzle game should check, such as a steady introduction of new mechanics, and puzzles that increase in length and complexity. However, Factotum never strives to do more with either its story or gameplay elements, keeping it just shy of being a standout puzzler.

Factotum 90 puts the player in the driver’s seat – or rather, the driver’s distant control room – maneuvering two factory worker robots, adorably named Noel and Barbara. Together, the duo must press switches, pick up boxes, and redirect laser beams to save the remaining crew of the rapidly decompensating spaceship they’re adrift on. The ‘bots receive guidance from another crew member who serves as the game’s main source of exposition. Interestingly, I can’t recall if he ever revealed his name, but it’s of matter since our robot companions have far more personality that he does. 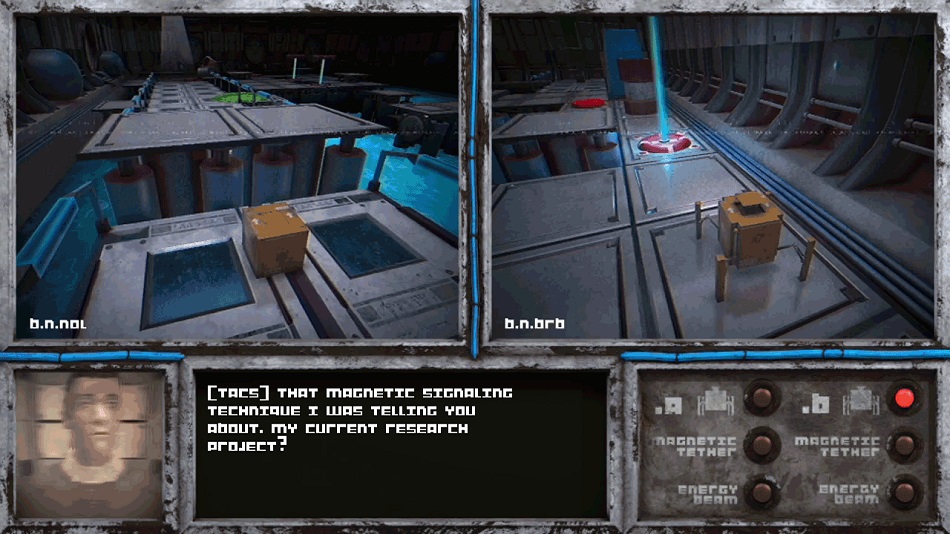 Design choices help Factotum 90 turn out to be more than a button-pressing simulation. The camera that follows the robots crackles like footage captured on an old camcorder, and each level gets introduced by a pair of panning security cameras that offer an overview of the upcoming stage. The true heart of the game, though, resides in Noel and Barbara. As they pass one another, Noel and Barbara communicate with beeps and boops that add much needed life and spontaneity to the dreary ship. I found myself mimicking their R2D2-like noises, wondering what kind of conversations they held.

While eavesdropping on the pair provides amusement, the puzzles that comprise Factotum 90 must stimulate the mind. On this front, the game delivers a perfectly adequate experience. Switching between Noel and Barbara with the press of a button serves as the backbone of the challenges. New mechanics appear at a steady pace, and while none of them are wholly original, they change up the stages just enough to ward off tedium.

The various gadgets the player will come across, though, never evolve beyond basic use. In one instance, the robots encounter a device that creates phantoms of themselves a short distance away to help reach out-of-reach switches. Only once did a puzzle using this phantom truly make me take a step back and plan how to use the ghostly doppelganger. Then, as quickly as this new idea appeared, it vanished only to appear just one more time before the game’s end. Factotum 90 treats the various contraptions onboard the ship with a mundanity that keep the puzzles from ever being clever or inventive, thus robbing the chance for it to ever cause any head-scratching.

Factotum 90’s brevity and evenly-paced momentum ensure that Noel and Barbara do not wear out their welcome, though part of me wishes they would have stayed longer. Just as I was beginning to warm up, Factotum 90 ends and there’s little reason to crabwalk through the ship again the campaign ends. I suppose desiring more of a game can (and should) be read as a compliment, but for a title that takes place in a futuristic ship adrift in the vastness of space, opportunities seem missed. Factotum 90 joyously breezes by, but leaves little to chew on. Rating: 7.5 out of 10

Disclosures: This game is developed by TACS Games and published by both TACS Games and Poppy Works. A free code provided for review purposes, and was reviewed on the Playstation 4. Approximately 3 hours of play were devoted to the single-player mode, and the game was completed. There are no multiplayer modes.

Parents: This game has been rated E by the ESRB. The game contains statements regarding human characters potentially dying, but violence is minimal. The vast majority of the content is two boxlike robots solving nonviolent puzzles.

Deaf & Hard of Hearing Gamers: Sounds are not crucial to playing Factotum 90. Dialogue boxes appear alongside spoken dialogue, and puzzles are not sound-based.

Remappable Controls: No, this game’s controls are not remappable. It was played with a standard PS4 controller.