Every day I write the book… IN SPACE 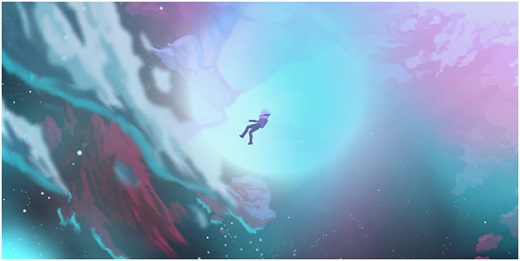 LOW: Writing stories feels like a waste of time due to lack of feedback.

WTF: Why can’t I change direction in mid-air when using my jetpack?

Elegy For A Dead World offers a novel approach (no pun intended) to games that allow players to create their own narratives. In this game a trio of new planets has been discovered, each named after a renowned Romantic poet: Byron, Keats, and Shelley.

Earth sends a survey expedition to evaluate them, but the ship suffers a catastrophic accident, leaving only one survivor. Cut off from home, the explorer investigates the three unfamiliar worlds, chronicling everything encountered and uncovering secrets of the past.

While there are only three planets to explore, each shows a simple-yet-stylish design indicative of the poems written by their namesakes, each one conveying a genuine sense of lifelessness in its own way. It’s an impressively high-concept title.

Fittingly, the works which inspired their names all deal with the subject of death and decay in some aspect. Shelley’s world is home to the remnants of spectacular architecture and machinery constructed by some long-forgotten civilization, echoing the theme of Ozymandias.

The landscape of Keats’s world is dotted with majestic organic sculptures in sharp contrast to the metal behemoths on Shelley. Considering the philosophy of negative capability in several of Keats’s works like When I Have Fears That I May Cease To Be, it suggests the inhabitants of this world made these colossal works as a way of proving that they would not be inhibited by the limitations of nature.

Finally, the last survivors of Byron’s world sought refuge in dusty underground shelters when the surface of their planet was gripped with a brutal ice age, drawing inspiration from Darkness. Concerning the gruesome imagery in that poem, one can only wonder what these survivors did to each other in their self-made tombs.

Before visiting each planet, players are asked to choose what kind of story they want to write. The majority of these prompts are to complete short tales about the history of the world or the feelings they evoke in visitors experiencing them for the first time. Other activities are grammatical exercises which involve fixing a sentence’s structure to make it accurate, or composing poems based on the visuals.

Depending on the template chosen, the number of entries and their locations vary, but the cues to write are usually situated near a prominent feature of the scenery, indicated by a quill pen symbol. They can be completed by filling in the blanks, or, if it strengthens the individual narrative, deleting one (or all) of the sentences and writing new ones from scratch. 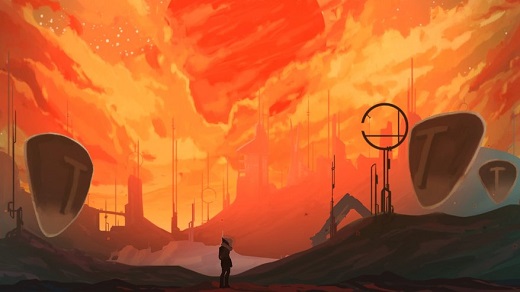 As players travel through each world and craft their tales, they may come across something that alters their perception of how the story was progressing: a sudden shift in the layout of the land, a change in climate, or a relic which suggests a much harsher fate for the world’s inhabitants than initially imagined.

On an initial playthrough, these game-changers provide a welcome creative challenge by throwing in a twist players aren’t expecting. Will they take the story down a different path based on the information they’ve gained, or change what they’ve already written to fit this new information? In the case of the latter, I commend the developers for making it easy to edit previous entries with quick travel between writing locations. Trying to travel back and forth by walking (or jetpack) takes far too long.

While the story prompts offer useful guidance getting new writers oriented, the most enjoyable choice is freeform writing. This grants players full freedom to author their own tales, writing whatever they want in almost any location. The opportunities are ripe to create an epic legend, a personal tale, a poem, or even a joke that spans the entire length of the level. Once a story is completed, it can be “published” through the Steam workshop, allowing others to read it.

Going through some of the works written, I was actually quite impressed. Those that followed the prompts tended to be a bit lackluster, but several of the freeform stories had a great deal of imagination. I read tales of despair, hope, longing, loss, descents into madness, and a few with wry humor. I wanted to seek out more, but ran into a problem—the stories available to read are chosen at random with no way to filter, other than picking what’s popular or most recent. Breezing through half a dozen stories I had no interest in to find one that was actually compelling became quite tedious.

Regretfully, there’s also a massive flaw which hinders the game’s intended purpose as a writing tool—there’s no way to provide feedback on other peoples’ stories.

Players can only commend a story they enjoyed without any chance to offer constructive criticism, or to tell the author what they liked and what they didn’t. Not even the grammar exercises allow for feedback. I tested this by rewriting several sentences with flaws, but the game never penalized me or pointed out my mistakes. It’s disappointing to put significant effort into telling a unique tale and seeing nothing come of it except the number of likes it’s gotten. This oversight is particularly baffling when considering how many games are incorporating social media; assisting budding authors is more worthwhile than sharing selfies.

There is potential for a great creative tool in Elegy For A Dead World. Anything that can give more people inspiration to write should be supported. However, without a way for players to interact and respond to others, they have no concrete method of learning where their strengths lie and what they need to improve. I also think the game needs to widen its scope. More worlds could be included with new story templates based on the works of other great poets, and players could be allowed to collaborate with one another to create even more impressive tales. These are just my suggestions, though. I don’t know what the development team has planned for the future of their game, but I truly hope to see it evolve into something spectacular. Rating: 5.0 out of 10


Disclosure: This game was obtained through a review code provided by the publisher and played on the PC. Approximately 3 hours were devoted to reading other players’ stories and crafting my own. Because of the game’s structure, there is no set endpoint. While you can look at what other players have written, there is no way to directly interact with them.

Parents: This game has not yet been rated by the ESRB or PEGI. While the concept is mostly innocuous, there is no way to tell if a story contains vulgarity before reading it.

Deaf & Hard of Hearing: The ambient sounds of each planet may help inspire some with their writing, but the game can be played in complete silence without any hindrances.