Been There, Done That, Wanna Do It Again 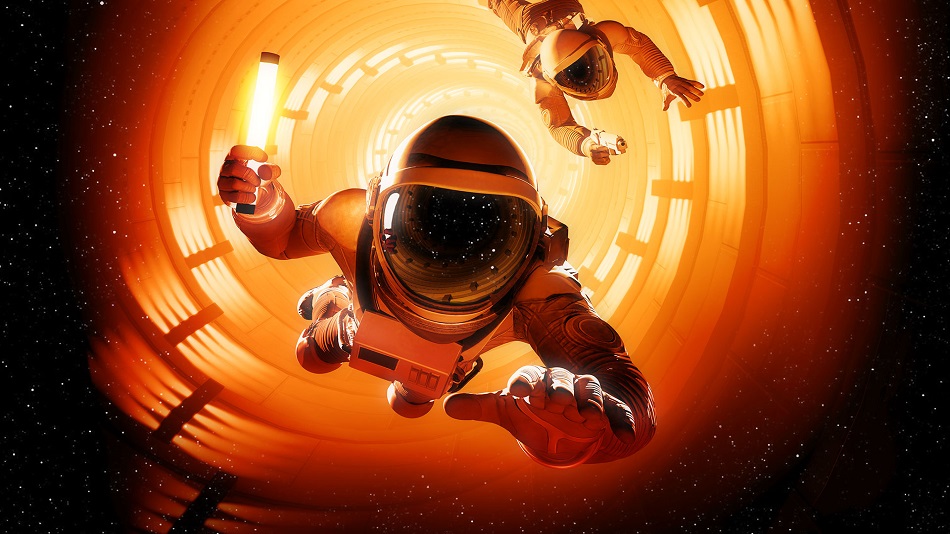 HIGH Getting out of narrow passages and into open space.

WTF I’m in Ancient Egypt now, and I don’t know why.

It’s unfortunate that Downward Spiral: Horus Station hit PSVR after Detached.  Re-reading my review of Detached and going over Mike Suskie’s PC review of Horus Station, I found that we were both enamored with the novelty of zero-gravity gameplay in virtual reality.  The combination of VR and the exploration of space left a lasting impression on both of us.  However, having played a similar title right before this one meant that there was now a risk of novelty’s sheen being worn off. Luckily, Downward Spiral brings a few extra features to the table.

In Downward Spiral, I was an astronaut exploring the abandoned Horus Station.  While a standard first-person ‘flat’ mode for standard TVs is included, I opted for the first-person PSVR mode using Move controllers.

Downward Spiral initially had me navigating through a ravaged space station by grabbing features in the environment with the Move controllers and pushing my way around.  While this mechanic was useful at times, it quickly became awkward. It only took a handful of instances with a wall just out of reach to grow tired of drifting helplessly through space until I could finally reach something to push from. Conversely, I found that my helmet frequently blocked my path in cramped quarters with plenty of objects to grasp. 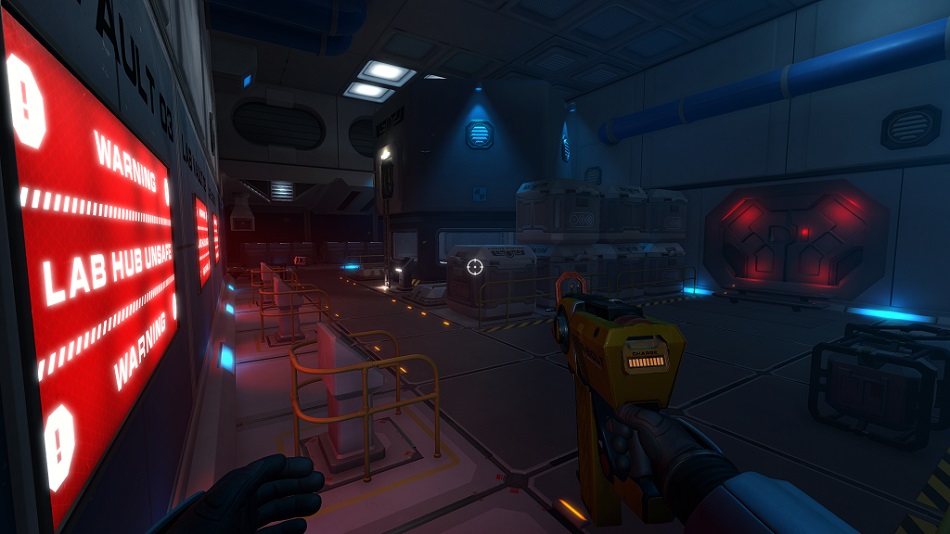 Fortunately, DS:HS soon introduces a grappling hook which provides a comfortable, yet exciting locomotion mechanic.  Being able to pull myself across a room in one direction while scanning a hallway in another and firing off rounds at enemies in a third was one of those “only in VR” moments that made me happy to be in a headset. However, these tense, action-packed moments were sparse since the majority of play consisted of traveling through narrow corridors, pressing whatever glowing buttons I could find in order to make the next door unlock.

Another issue was that when combat was occurring, it suffered from lopsided design. It seems much thought was put into weapon design and variety, but little was put into enemy design and strategy.  By the end of the adventure I had a varied, exciting arsenal that could only be put to use against a smattering of repetitive and annoying drone types.

The combat also demonstrates another confusing split in design because DS:HS offers both an combat-free singleplayer mode and an online multiplayer deathmatch/horde mode.  The short time I spent in the combat-free mode was enjoyable from a zero-G exploration standpoint, but it made the inclusion of the arsenal even more pointless.  The multiplayer mode was dead on arrival due to a lack of players — a shame, since it might be what the weapon variety was intended to support. 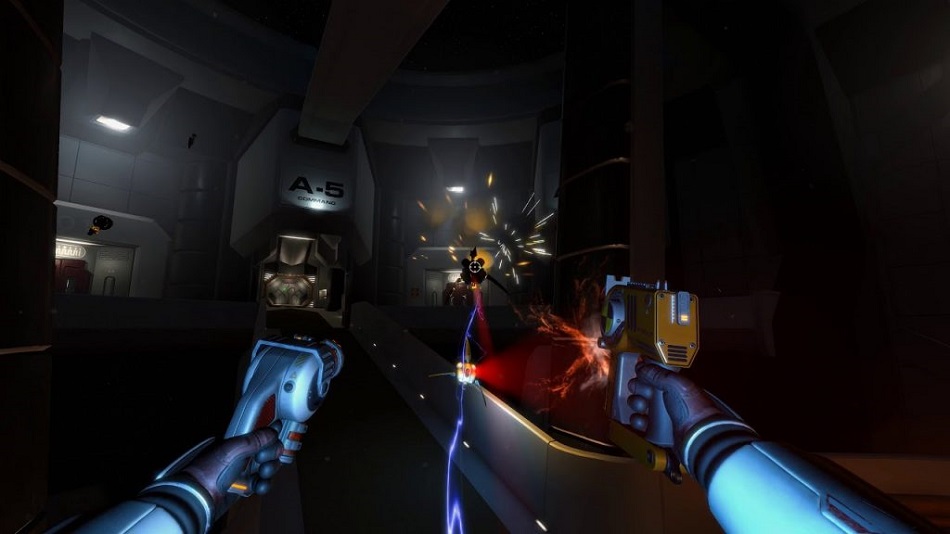 However, despite the incomplete design of its combat, Downward Spiral still provided moments that made me hold my breath with tension, and moments that took it away with spectacle.  A couple of stealth situations combined the quick-shooting of the grappling hook with careful peek-a-boo mechanics made possible by grabbing tables and walls to hide and look around them to avoid a dangerous enemy’s detection. Similarly, the end of the first act had me making my way outside of the station to bask in the glory of the planet I was orbiting.  With only a few chunks of debris to jump between, the risk of floating off accidentally into the void felt sensationally real.

Moments like these filled me with conflict as I both wanted to stay out there forever and also wanted to immediately scramble back to safety.  Unfortunately, the story is hard to follow and ultimately unsatisfying — the strongest moments were purely environmental, and by the time credits rolled, I was left wishing for more of them.

Disclosures: This game is developed and published by 3rd Eye Studios LTC. It is currently available on PC, PS4/PSVR, HTC Vive, Oculus Rift, and Windows Mixed Reality. This copy of the game was obtained via publisher and reviewed on the PS4/PSVR. Approximately 6 hours of play (5 hours in VR, 1 hour in non-VR) were devoted to the single-player mode, and the game was completed. No time was spent in multiplayer modes – there were no other people online.

Parents: According to the ESRB, this game is rated T and contains Violence. The only violence is shooting at robots. There are a handful of dead bodies floating around in spacesuits.

Deaf & Hard of Hearing Gamers: For the game mode with combat, it’s rare to know about enemies approaching unless you hear them first. Once they get near, visual indicators let you know when you’re being damaged. There are options for subtitles in the game, but oddly, I never encountered audio dialogue nor subtitles.

Remappable Controls: No, this game’s controls are not remappable. There are two different control schemes using Move controllers or Dual Shock, but they are not adjustable. 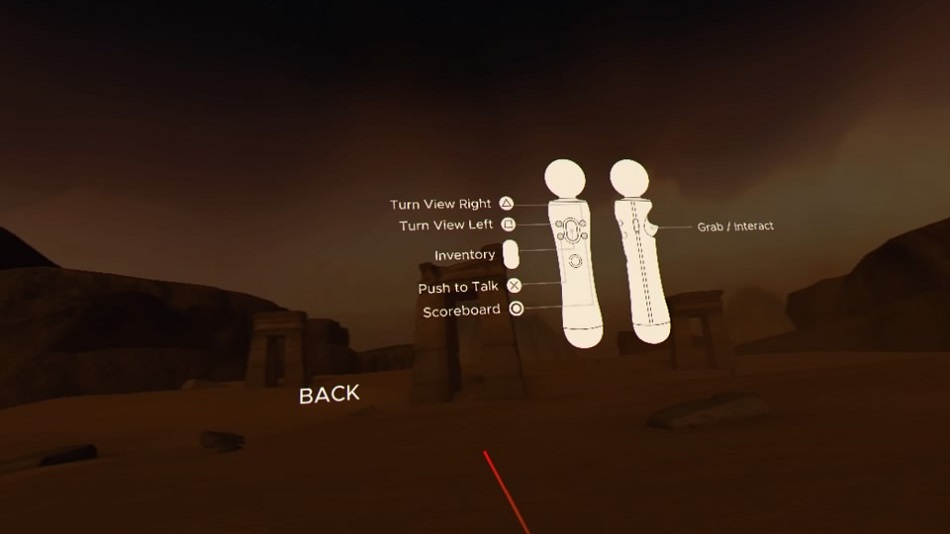 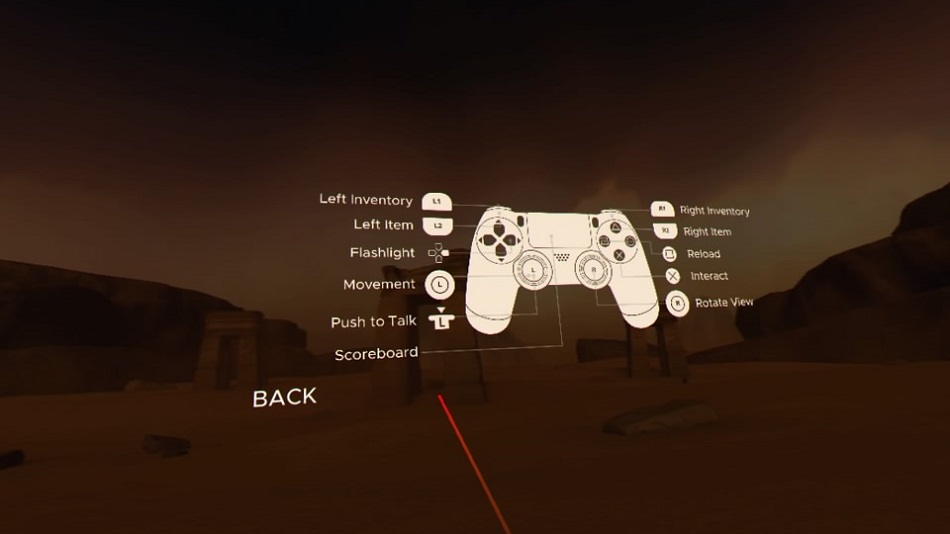