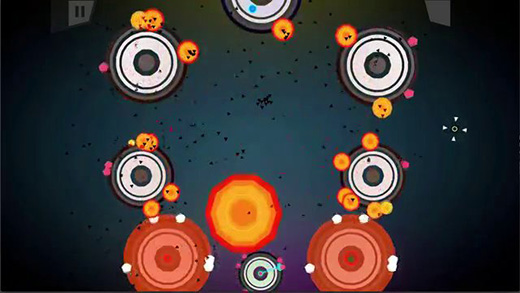 The best puzzle games are ones that are easy to learn but difficult to master. Sure, anyone can beat a level of Peggle, but can they do it with only four balls? How about just one? Angry Birds allows progress by popping all the pigs, but those who really want to show the world their skills need to do it with the least amount of resources used.

Robotube Games' upcoming puzzler Destructamundo seems to follow that creed. The Gaijin Games-owned studio (Bit.Trip Runner) captures that same feeling of encouraging rampant perfectionism that makes games like these so addicting. Sure, a level can be cleared using three bombs, but a truly talented player can do it with just one.

The premise is simple: a massive alien empire is rapidly expanding and needs large quantities of raw materials to survive. The solution is to destroy any planet that isn't part of the empire and gather up the shattered remains using the barest minimum of warheads to achieve this goal. Of course, there could be other civilizations already on those unfortunate planets, but they're just collateral standing in the way of the glory of the Empire.

Gameplay consists of choosing where to deploy the alien warheads to cause the maximum amount of carnage. These bombs are limited in size, so the initial explosion will never be enough. The trick is to cause several secondary detonations, much like tossing a match into a firework factory, which in turn will cause a chain reaction large enough to cause the core of the larger planets to explode. Overwhelming force isn't the goal here; It's finding the right place and the right time to set off the first spark and watch the rest of the system burn.

As the game progresses and levels become more difficult, more quirks are introduced into the planetary systems. Things like moving explosive nodes require perfect timing, and shielded planetoids that require more than one blast to crack are just a few of the things standing between the mineral rich worlds and their would-be alien harvesters.

With its 8-bit style invoking fond memories of playing Missile Command as well as the same addicting qualities I enjoy in my puzzle games, Destructamundo looks to be a must buy for me when it finally comes out. Destructamundo can be played early next year by anyone with an iOS device and the ten people that still own an Ouya.