All Treats, No Tricks 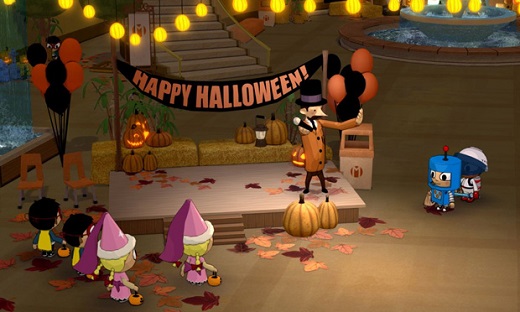 LOW Controls for the PC version were not well-optimized

WTF The clown’s face in battle.

When I first played Costume Quest in 2010 I found it quite charming, with considerable replay value that was enhanced with the Grubbins on Ice DLC. It was far from perfect, but I considered it one of the hidden gems of the year.

After learning that a sequel was in development I was pleased, but also hesitant. By this point Tasha Harris (the lead for the original game) had left Double Fine to return to Pixar. Without her spearheading development, I was worried the sequel would lack the creative spark that had been present in its predecessor. Now that I’ve completed it, I see that I had no cause for concern. Costume Quest 2 may not be better than the first Costume Quest, but it’s just as enjoyable.

Having escaped from Repugia, twins Wren and Reynold managed to find an interdimensional portal that returned them home on Halloween night. The siblings are more than happy to pig out on candy and relax after their dangerous exploits, but before they can gorge, a new threat is unleashed upon their suburb. Shocked by the loss of their treats, Wren and Reynold barely have time to react before they’re beckoned to another time portal.

Tasha Harris was heavily inspired by Earthbound (Mother 2) while working on the first Costume Quest, as shown by the clever writing and quirky humor. That same comedic touch is present in Costume Quest 2 without any drop in quality. There’s an abundance of witty dialogue and absurd scenarios. Also like Earthbound, more serious, personal issues are intertwined with the childlike imaginative concepts and surreal humor. The first game placed a strong emphasis on familial bonds, mainly those between siblings. In the sequel, the prevailing theme is the importance of allowing children to fully enjoy the simple pleasures of childhood.

The central hook of the game is acquiring new costumes to provide advantages in combat and progress through each area. Most of the outfits are split into pieces that must all be gathered along with a design plan to put it together. With the exception of the Candy Corn (which can only defend) each costume has its own unique attack and special move.

This range of abilities can be things like attacking every enemy on the field, restoring health, or inflicting status ailments. Their use in the overworld is usually to bypass environmental obstacles or complete sidequests—the Pterodactyl can blow away mounds of leaves, the Pharaoh’s staff is used to travel along ziplines, and Thomas Jefferson allows players to negotiate with stubborn NPCs. There are two hidden costumes, a Werewolf and Solar System, which can only be obtained by completing optional sidequests. They require some effort to find and don’t have any overworld powers, but since they have some of the most powerful attacks in combat, they’re well worth seeking out.

Regretfully, action commands are a pain to pull off using a keyboard. It’s very difficult to get the timing right, as there always seems to be some lag between hitting the key and triggering a response. It got to the point where as soon as I selected my attack I would just keep rapidly tapping the key and hope it would register at the right moment. A controller is essential for smoother combat.

Also, while it’s not a problem per se, introducing time travel as a narrative device always presents the risk of plot holes, though for the most part the game manages to avoid paradoxes. However, the time holes aren’t used as well as they could have been since their only purpose is to travel between time periods as the story dictates. Otherwise, there are no puzzles or challenges that require altering something in the past to bypass an obstacle in the future. It was a wasted opportunity, and a surprising one considering Double Fine used this mechanic in their previous title The Cave.

Aside from the issues with PC controls and the lack of time-oriented puzzles, there’s hardly anything wrong with Costume Quest 2. It has everything that made the original Costume Quest so endearing: humor, originality, simple yet enjoyable gameplay, and an overall experience that evokes childhood fun. Several critics have complained that the game is too easy, and while I can’t disagree with that assessment, I think they’re focusing on a nonessential issue. Costume Quest isn’t about providing a challenge; it’s about rekindling the magic of Halloween we all experienced when we were younger, and it does an incredible job. Rating: 8 out of 10


Disclaimer: This game was obtained via retail purchase from Steam and played on PC. Approximately 9 hours of play was devoted to the game, which was completed. There is no multiplayer mode.

Parents: The ESRB rates this game as E10+ for containing fantasy violence. Battles do not depict blood or serious injury. While some of the jokes and references may go over the heads of younger players, dialogue is devoid of obscenities and sexual innuendoes.

Deaf and Hard of Hearing: All dialogue is presented in speech balloons, and the game does not depend on audio cues.