Falls Short in the Polls 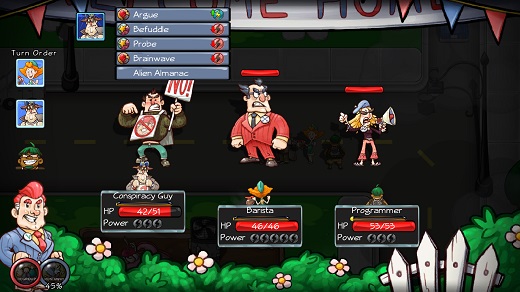 WTF: “Pop quiz today: cheaters will be electrocuted on sight.”

Some games provide an experience that simply cannot be replicated. The components and mechanics might be copied by others, but they’re simply unable to resonate like the original. For example, no game has been able to recapture the somber yet awe-inspiring majesty of Shadow of the Colossus, the insane brilliance of Killer 7, the simple artistry of Flower, and Earthbound on the SNES… well, it’s in a class of its own.

On the surface Earthbound seems like a standard JRPG with a modern setting, quirky humor, and repetitive combat. Careful analysis reveals complex themes of sacrifice, faith, loss of innocence, maturity, and dark aspects of human nature. Its effective balance of humor and serious issues made it one of the most acclaimed cult classics of the last 20 years. Naturally, other developers have drawn on it as inspiration, but none have been able to measure up. Citizens of Earth, the debut title from Eden Industries, attempts an Earthbound-esque tale of its own, but like the others, it falls short.

Citizens of Earth is set in the present with a mundane world endangered by strange forces. Healing/status items are everyday consumables like donuts, medicine and sushi. A vast array of weird enemies including coffee-making androids, demented hippies, and limbo ninjas stand between the players and their goals. The similarities to Earthbound are pretty overt.

There are moments, however, when it goes beyond homage and comes across as blatantly copying the source material, like a scene where players have to fight off a succession of cops in a police station, or battles that take place before a neon-colored background. The final encounter of the game is won by having the Vice President draw on the positive energy from everyone he encountered on his journey, with the text declaring that the monster “cannot comprehend” hope. Connections like these don’t necessarily hurt the game, but it suggests the developers took the easy route by making obvious references rather than giving their own interpretation of these elements.

Apart from the numerous similarities, Citizens of Earth does offer an abundance of original humor, though its quality varies. My favorites were a book about using pastries as good luck charms titled “Éclair-voyance,” and the Vice President asking if penultimate was mightier than the swordultimate. Unfortunately, more jokes were misses than hits thanks to bland parodies (a coffee chain called “Moonbucks”, a film star named Tom Bruise), tired slams about the dishonesty of politicians, occasional moments where characters break the fourth wall, and elements like a giant squid being part of a road safety crew for no obvious reason. 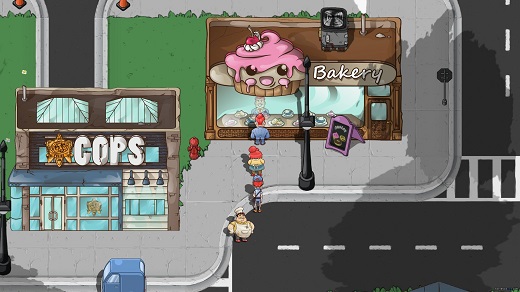 Citizens of Earth puts significant effort into promoting its humor at the cost of the narrative. This isn’t necessarily because of the quality, but because there’s nothing to balance it out. As mentioned earlier, one of Earthbound‘s greatest strengths was blending absurd comedy with mature topics. Citizens of Earth has no drama to provide contrast; it just rushes from one joke to another and appears shallow as a result.

One feature from Earthbound I wish Eden hadn’t replicated was the combat system. While Earthbound‘s story and aesthetics remain timeless, its battle mechanics have not aged well, with battles that were simplistic, repetitive and overlong even back then. Citizens of Earth falls into this same trap.

Just about every battle devolves into picking an attack, executing it, and repeating until the monsters are dead, and I never needed to use damage-dealing or status ailments because it’s quicker to keep spamming attacks. The only strategy comes from swapping out party members with elemental attacks. This can be done during a fight, but it starts the battle over again. It’s also incredibly frustrating when monsters summon allies to join them in battle and causes everything to drag on even longer.

A large part of Citizens involves recruiting new members, and while several automatically join as the story progresses, the majority can only be gained by completing a task specific to them. These usually entail defeating a specific number of enemies, winning a mini-game, or completing a fetchquest. A few (the worst) can only be earned if exact criteria are met, which can become incredibly maddening depending on the task. Most annoying? The Weather Lady who only joins if encountered while it’s raining, while having no idea where she may be, and the Sushi Chef who requires five pieces of fresh sushi—a perishable item randomly dropped by undersea enemies.

Adding insult to injury, the usefulness of recruits ranges from incredibly beneficial to worthless. The Captain, Pilot and Programmer are valuable since they allow for quick travel across the overworld. The Architect, Bodybuilder and Gardener can be used to bypass blockades, though I didn’t find myself using them that often. The most useless citizen talent was the Camp Counselor’s, who allows players to change the names of their party members.

I do want to give credit for the experience system, though. Rather than awarding experience at the end of a fight, it’s distributed after each individual enemy is defeated, with a bonus applied at the end for vanquishing groups. This makes it possible to level up in the middle of battle, instantly replenishing health. Party members can even gain experience if knocked out, though they won’t revive upon leveling up.

While I don’t think that Citizens of Earth was made as a cynical attempt to cater to Earthbound fans by offering a shallow copy of the cult hit, it’s clear that the devs focused too much on emulating the game’s superficial elements without adding their own depth or innovation. Players looking for a more faithful successor to Earthbound are better off with the Costume Quest games, which have heart, humor, and engaging combat. Citizens of Earth may entertain for a while, but I doubt it’ll have any real lasting appeal. Rating: 6.0 out of 10


Disclosure: This game was obtained through a review code provided by the publisher and played on the PS4. Approximately 16 hours were devoted to the campaign, and the game was completed without recruiting every citizen. There is no multiplayer mode.

Parents: This game has been rated E10+ by the ESRB for fantasy violence, tobacco references, and simulated gambling. There is no nudity, graphic violence, or vulgarity any stronger than a character saying “We’re screwed” before a powerful boss fight. It’s an inoffensive game overall.

Deaf & Hard of Hearing: All dialogue is delivered in text boxes. There are no audio cues needed to progress.