The Perfect Game For A Serial Killer Mystery Plot 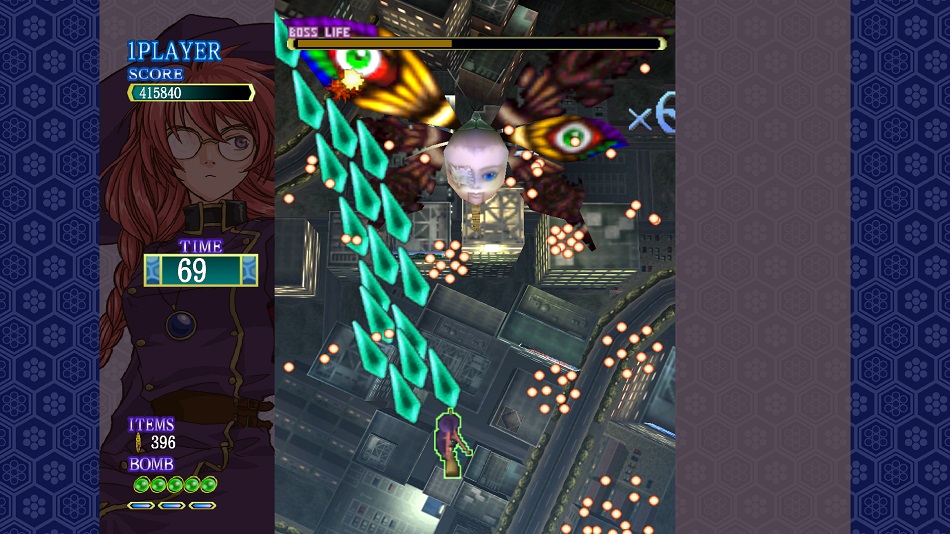 LOW Dying because my character is a blurry mess on a high resolution screen.

Castle of Shikigami (in America, at least) is probably better known for its strange path stateside than it is as a game. It was released on the PS2 as Mobile Light Force 2, which is famous for having some of the worst box art of all time — many gamers probably remember the Charlie’s Angels-inspired cover in their local bargain bin.

CoS was not, in fact, a sequel to Mobile Light Force on the PS1 (which featured the exact same box art, and was itself was a re-branding of dope shooter Gunbird) but a completely unrelated series of heavily Japanese games that brought an all new meaning to the phrase ‘don’t judge a book by its cover’.

Confused yet? Welcome to the strange world of playing niche Japanese games circa 2001.

After all that weirdness, Castle of Shikigami has finally been given its first international release under its proper name. For the uninitiated, this title is a vertically-scrolling shoot ’em up (hereby known as ‘shmup’) of the bullet-hell variety. Also for the uninitiated, ‘bullet-hell’ has become a catch-all phrase for shmups involving hundreds (if not thousands) of enemy projectiles onscreen at once.

Newcomer to the genre will find the difficulty curve of this one to be rather fair, with the first few levels seeming tame compared to the preposterous onslaught faced in the final stages.

In terms of story, it takes place in Tokyo during the far-flung future of 2005, where a serial killer has been ahh… nevermind, it’s not worth talking about. There are lots of monsters everywhere, so take one of the six main characters and fly around shooting everything in sight. Castle of Shikigami (like a lot of entries in the genre) has a surprisingly fleshed-out-yet-incomprehensible plot, and the laughable translation won’t help decipher it, although it may add enjoyment for people who get a kick out of that sort of thing. 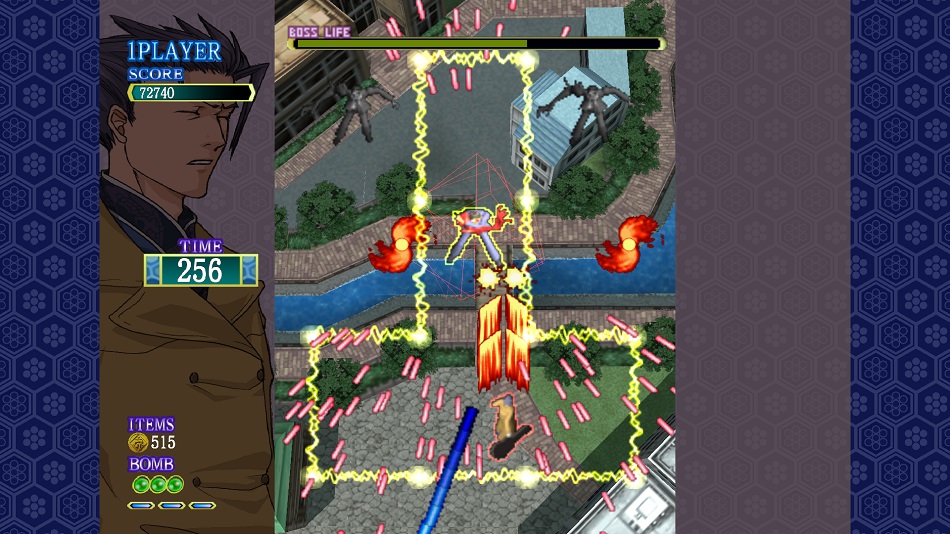 Each character has three different attacks. Tapping the fire button usually shoots a barrage of bullets, while holding it initiates a homing or melee attack depending on the character. There’s also a screen-clearing bomb useful to remove oneself from a sticky situation.

Enemies drop coins which can be collected to level up attacks, and a daring player can brush close to incoming fire to increase both the power of their bullets and the rate at which coins are dropped. This is all fairly standard bullet-hell formula, and games of this type are often judged primarily on the quality and artistry of the enemy’s firing patterns. In this regard, Castle Of Shikigami is expertly crafted.

As with most shmups like this one, the trick to success is a combination of pattern memorization and keeping an eye on the character’s hit box. The six playable protagonists take up a decent amount of real estate on screen considering all of the stuff flying around, but the actual area on the body where one can take damage is rather small, giving the player a fighting chance. This hitbox is represented by a small jewel on the back of the character, but due to the sprites not seeing any sort of update in this re-release, it can be difficult to precisely see where it is.

The game displays polygonal bosses and environments at a high resolution, but leaves the sprite-based enemies and characters looking rather terrible in comparison. The anime-style character artwork in cutscenes hasn’t been touched up either, so watching a couple of static blurs throwing unspeakably-awful-yet-hilarious dialogue at each other isn’t what I would describe as visually appealing.

I also had difficulty with the game running in native full-screen, as it wouldn’t conform properly, and without any resolution options in the menu, I had to run it in windowed full-screen. The bullet-hell shmup genre is one where most western fans are happy to see releases like this at all, so quick and dirty ports are part of the territory. It’s on the PC, it runs, the menus are in English (but the credits aren’t) and that’s about as much as one could hope for in situations such as this.

One common feature that would have been appreciated (but isn’t included) is ‘tate mode’, which allows the player to flip the playfield and aspect ratio from a vertical scroller to a horizontal one. Then, for the crazy people in the room, it’s possible to place a monitor on its side to simulate a proper shmup arcade cabinet. As someone who now owns a somewhat boxy new laptop I was looking forward to trying this, but was disappointed to see no such option. Publisher Degica Games did throw in online leaderboards so I can see how much worse I am compared to the Japanese players, though.

The Castle Of Shikigami, while known and appreciated in the shmup community, is definitely not a top-tier bullet-hell. Its sequels are better and available on other consoles, so anyone who appreciates its bizarre aesthetic can get their fix elsewhere. It’s a noteworthy entry in the genre, but at this point it’s hardly a necessary one except for the most serious of shmup fans — in 2017, this game is obsolete. Rating: 4.5 out of 10

Disclosures: This game is developed by Alfa Systems and originally published by Taito in Japan with the new Steam version brought to us by Degica Games. This copy of the game was obtained via publisher and reviewed on an ultrabook laptop PC with a core i7 processor, 8GB of RAM, and a 940MX GPU, which was able to handle the game easily. Approximately 90 minutes of play were devoted to the single-player mode. The game was finished with two of the six playable characters. There are no multiplayer options

Parents: After a detailed search online, including the ESRB site, the Steam page, and press releases from the company, I have been completely unable to discover a rating for this game. If I were to rate it myself, I would give it a T due to subject matter involving serial killers, some swearing, and potentially unsettling monster design.

Deaf & Hard of Hearing Gamers: The story segments are all subtitled, and while there are audio cues to inform the player when their tension is increased, it is very playable without the sound.

Remappable Controls: This game’s controls are completely remappable and support both keyboard and joystick options.

Colorblind Modes: There are no colorblind modes available in the options. Any colorblind gamer who struggles with red or blue will have a very difficult time deciphering the onslaught of bullets on screen.