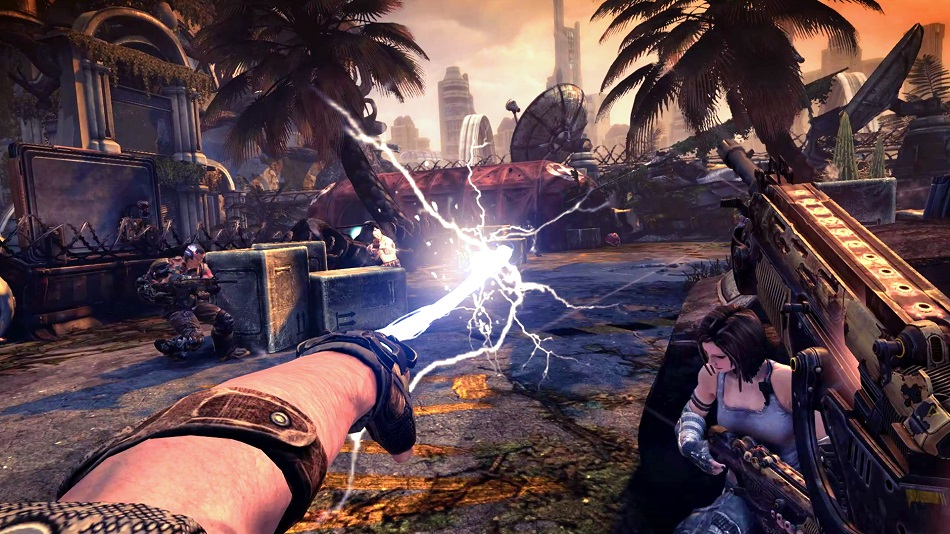 HIGH Looks great still and the combat holds up well.

Bulletstorm is one of those games that I think about randomly. It just pops into my head every few months or so, and when that happens, I usually want to play it. However, I no longer own a 360 or have a PC that can run its terrible Games For Windows Live port, so in the past I would just move on and think of something else. But now? Bulletstorm has been remastered for PS4, Xbox One and PC.

While this might look like a title focused on dick jokes, what lies beneath the surface of this crudeness is a well-told, engaging storyline that sadly ends on a cliffhanger. Bulletstorm stars Grayson Hunt, a former elite soldier who was tricked by his commanding officer into killing innocent people. He and his squad vow revenge on this General, and the start of the game, Hunt destroys the General’s ship and everyone crashes onto a deadly planet below.

What I love about the story of Bulletstorm is that for as crass and gross as the characters talk, I got the feeling that they really cared about each other… Or really hated each other. The voice acting is fantastic, and the pacing in conversations feels more natural than that of most games. There’s also a lot of worldbuilding in Bulletstorm. In the six-to-eight hour campaign, players will learn a ton about their universe.

Visually, Bulletstorm has aged fairly well.  Things look great, and apart from some occasional framerate drops, it usually runs at a smooth 60fps. The vibrant colors pop even more on a new platform, and the art style shines in higher resolution. The sounds and music don’t feel like they got as much love during the remastering process, but it’s fine. Unfortunately, while it sports a shiny new coat, where Bulletstorm has aged the most is in the gameplay and mechanics. 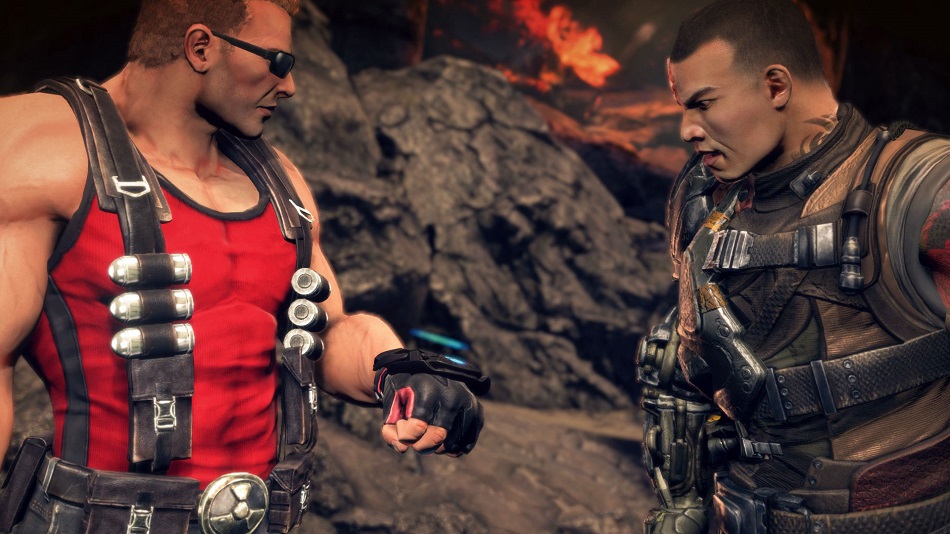 Showing its roots, the game feels like it fell right out of the era when every new title was filled with quicktime events. It’s lousy with them. Every five or ten minutes, players are forced to do another QTE, and Bulletstorm even judges and rewards players based on how quick they react to them. Climbing across a chasm? QTE. Fighting a boss? QTE. Turning on a machine? QTE. I’m not against quick time events, but the devs go overboard with them, and in 2017 this particular design choice stands out in the wrong way.

The combat and movement also creak, and the lack of mobility feels off. Yes, players can slide across floors whenever they want, but there’s no mantling, jumping, wall running, or anything else. It can make the firefights feel a bit simple after years of shooters becoming lighter on their feet.

That said, while Bulletstorm’s combat might seem a bit simple compared to modern shooters, it’s far from boring. The gunplay is all about getting “skill shots”, which are different ways to kill enemies. For example, some basic skill shots include headshots or shooting enemies in the air. More complex skillshots reward players for setting up cool moments like using a hotdog-shaped car as a bomb that flings enemies into nearby spikes. Players can link these together to create massive, satisfying combos, and each of these skillshots has a name and point value. Earning points allows players to unlock weapons and upgrade them.

Speaking of which, the firearms here are amazing — from standard shotguns and assault rifles, to more bizarre and outlandish weapons like a sniper rifle that shoots remote-control bullets, or a gun that shoots giant drill bits that pins enemies to walls… or tunnels through them. All weapons have secondary firing modes, and each is better in certain situations — trying to decide which guns to bring was like deciding which of my children I loved more.

Finally, this remaster also offers players the chance to be Duke Nukem. I was not provided a code for this and didn’t want to spend $5 on the opportunity to play as a washed-up relic of the ’90s, But Duke is playable through the entire game, and even has new voice work done by the original Duke voice actor, John St. John.

While this review of Bulletstorm: Full Clip Edition has been largely positive, I have to say that the biggest problem I have with it is the price — $60 for a remastered game is a bit steep, especially when it’s fairly bare-bones in terms of content. Also, considering that the original release didn’t sell well, it seems like a bad idea to charge that much. The steep price of entry will likely keep curious players away when the correct thing to do is entice them in with the best possible version for a great deal. It’s certainly a fantastic shooter, but I’d recommend waiting to catch it on sale. Rating: 8 out of 10

Disclosures: This game is developed by People Can Fly and published by Gearbox. It is currently available on PS4, Xbox One and Windows PC. This copy of the game was obtained via a code provided by Gearbox and reviewed on the Playstation 4. Approximately 11 hours of play were devoted to the game, and the game was completed. 3 of those hours were spent playing the additional side modes.

Parents: According to the ESRB, this game is rated M for Mature and contains Blood and Gore, Intense Violence, Partial Nudity, Sexual Themes, Strong Language and  Use of Alcohol. The game is filled with gore and violence. Enemies can be burned, electrocuted, blown up and more. Characters say nearly every swear word in the book and players can drink alcohol and fight enemies drunk.

Deaf & Hard of Hearing Gamers: Subtitles are provided to the player by default. Sound can be important in determining where some collectibles are located, and no visual cues are provided for these onscreen.

Remappable Controls: No, this game’s controls are not remappable. Players must choose from a list of control schemes.