Oh, Was That The line Back There? Did I Cross It? 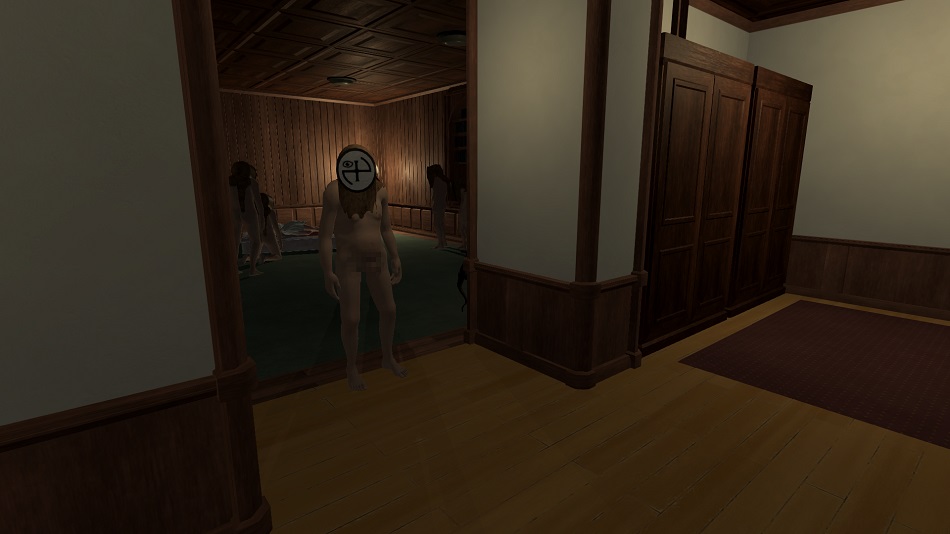 HIGH Laughing one moment, shocked the next, and wrapping it all up with a little bow of terror.

LOW “Puzzle game” and “Guess-randomly-because-I-don’t-even-know game” are the same here.

WTF Unexplained naked guys with masks of the Dark Lord?

I have never played a game that made me so… uncomfortable?

The quirky opening animations of Bucket Detective were unfortunately paired with broken, confusing English that left me referring to the subtitles just to understand what was said. Entering the main area of the adventure introduced me to a cliché escape-style room, but I quickly found a shrine to the female reproductive system, complete with some pretty gnarly (and extremely graphic) artwork.

At that point, I was hooked.

In Bucket Detective, a first-person indie title from The Whale Husband, my unnamed character is sad that his wife is weird, so he decides he’d like to write a book in order to be popular and meet new women. When he discovers that authoring a book with only a working title to go on is extremely hard, he stops off at a bar. Lucky for him, the bartender knows a guy who knows a guy… Or something like that. The next thing I know, I’ve been set up in an old building full of flies, black mold, and blood, and I’m trying to make the appropriate sacrifices and complete the tasks necessary to bring the Dark Lord to power.

Yeah, none of that is a typo.

Navigating this creaky old (hotel? house?) was pretty intuitive, and most of the controls were typical of this genre. The graphics and movement felt natural and the area was laid out cleanly, allowing me to move through the hallways and get the feeling of being closed in without some of the clunky movements that come with small spaces.

Despite how weird and unpleasant parts of Bucket Detective were, I was generally impressed by the level of interaction that was possible. The halls were minimalist, but most things could be picked up, and opening doors was smooth and realistic. Just as I was wondering why the dozens of paintings in the halls were copies of the same three pictures, I picked up a note that said “because they like it that way.” There were several laugh-out-loud moments like this in Bucket Detective, but I ultimately spent most of my time staring, confused, or cringing in terror. 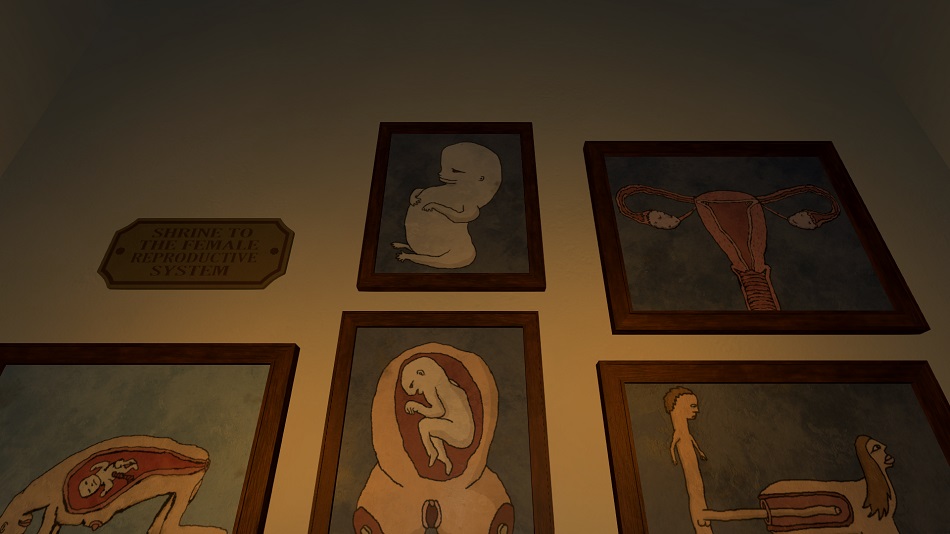 In all honesty, most of the game had me feeling this same jumble of emotions — cartoons and funny voices turned into a horror escape game and back again, and there was a persistent element of disjointedness that kept me from getting involved. Certainly the scare tactics were effective, and more than once I yanked out my earphones, terrified of some noise or effect, only to find that nothing had happened. While I was impressed that a title with no real danger managed to be so horrifying, I also found myself constantly waiting for something to happen.

Part of this was because the story left something to be desired. Intricate rooms with puzzles and clues built up my excitement that something was about to be revealed, only to have me solve the problem at hand by guessing randomly, confused about what the point was. I had no answers, and as a result, I didn’t care.

Throughout the course of the game, I managed to lose a finger, a hand, and both of my legs. The sacrifice of these limbs was voluntary, I suppose, but necessary for unlocking doors. However, it was also based on the fact that I answered every possible question asked of me incorrectly. Where I was supposed to get the right answers, I’m not sure. In fact, I’m not entirely sure there were any right answers at all.

Upon choosing the wrong answer in one particular puzzle, an overhead narrator informed me that my time had expired and I should follow his directions to complete my lifetime. I was shocked, not having realized I had screwed up, and somehow felt compelled to obey. Bucket Detective managed to kill me without ever killing me — I was surprised at the conflicting feelings that came from willingly walking to my own death.

Bucket Detective was definitely a game where I felt like I needed to take in all available information, and I can’t help but wonder whether the game would make sense at all if I hadn’t. The plot is described through journal entries, notes and voice recordings scattered throughout. Unfortunately, pedophilia, rape, and murder are thematic elements here, and something about it just felt…wrong.

…Okay, everything about it felt wrong, and I never knew whether I was going to laugh or cringe when I took in more of the lore. For example, the apparent narrator indicates his own sexual assault and abuse, as well as that of a woman who is later found dead and bloody, having delivered a “genderless child” while surrounded by naked men.

In around an hour, I managed to complete Bucket Detective with two endings, and the developer smartly added the ability to load any section of the game I wanted so that I could go back and play for the others. I guess the fact that I want to see more of it makes it a ‘good’ title, but to be honest, I’m not sure I’d ever recommend it to anybody. Rating: 4 out of 10

Disclosures: This game is developed and published by The Whale Husband. It is currently available on PC and Mac. This copy of the game was obtained via publisher and reviewed on the PC. Approximately 1 hour of play was devoted to the single-player mode, and the game was completed (finished 2 of 5 endings). There are no multiplayer modes.

Parents: According to the ESRB, this game has not yet been rated. However, there are extremely graphic sexual images; graphic violence, blood, and gore, nudity; and lots of death. I would highly recommend against allowing children to play.

Deaf & Hard of Hearing Gamers: While most of the game had some subtitles, ambient sounds and voiced instructions were not captioned.