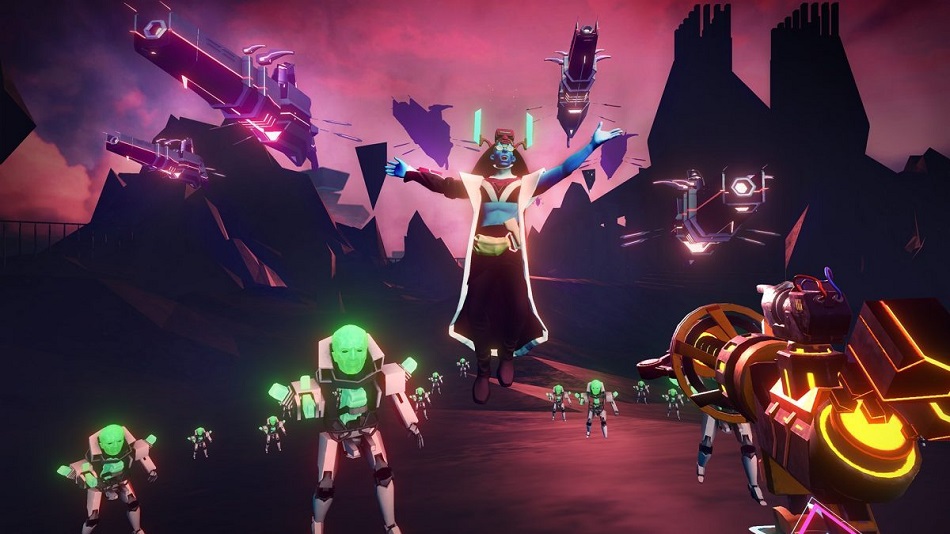 HIGH Blasting an enemy without looking while dodging a wall of bullets unscathed.

WTF The decapitated heads of bosses are oddly gruesome.

When I was a kid, my father had a friend that we affectionately called “Beast.”

Having grown up as a computer geek, Beast earned his nickname at the local arcade. He could often be found there, perched on a barstool in front of any given machine, legs wrapped around the cabinet while hurling grunts and insults at whatever game he was conquering.  When playing NES against him, he would submit me to similar (but slightly more appropriate) behavior. He was an eccentric, nerdy adult who taught me that there was something to be enjoyed in playful taunting.

It’s probably too much of a coincidence to be true, but I shared this story because but I’d almost be willing to bet that the developers of Blasters know Beast, too. 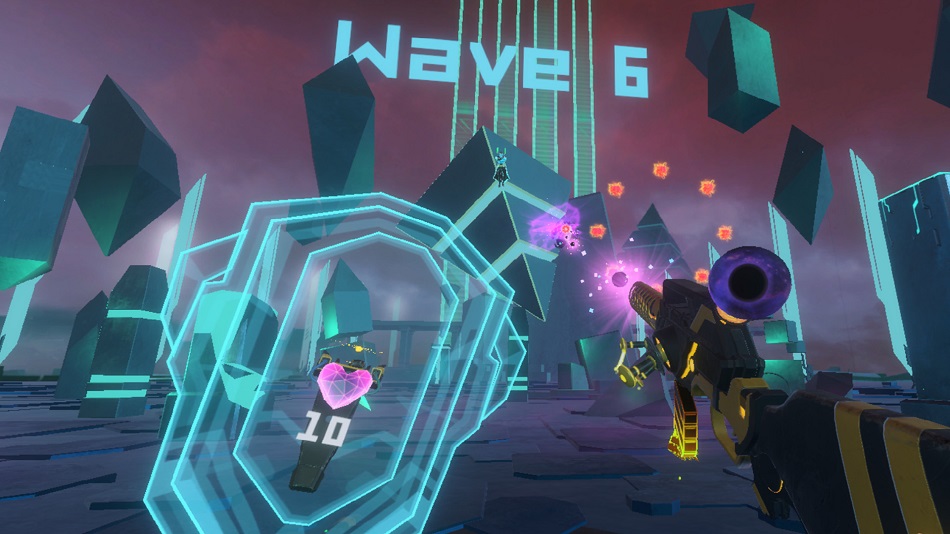 The antagonist of Blasters is a nerdy arcade master named Alwyn (All-win, get it???) who became a digital lord in virtual space, and he protects his domain by sending enemies, bullets, and taunts at all who oppose him. Each of the varied enemies he sends come in a pattern requiring me to duck, dodge, and return fire.

Blasters of the Universe is the first VR title I’ve seen attempting to recreate the frenetic feeling of a bullet hell shoot’-em-up, and it manages surprisingly well — on multiple occasions I was out of my seat and stretching my head upward to dodge an incoming laser, only to have to limbo my body under a line of bullets sent from the other side of the level.  After each failure, going back to my armory and experimenting with new weapon mods and loadouts was solidly enjoyable.

Although it’s a bit short with only four levels, two difficulties, a weekly challenge, and an online score attack leaderboard, it’s right in line with what I’ve come to expect from an arcade-style title, and in its favor, it’s a rather refreshing take on the ‘shooting gallery’ genre that is quickly becoming stale among VR offerings.

Blasters absolutely nails its aesthetics.  Each level has a retro-futuristic vibe that hearkens back to old-school ideas of what life would look like inside a videogame. The entire experience is backed up by techno ’80s tunes to the complete package.

However, despite the perfect tone and atmosphere of Blasters of the Universe, I don’t think the developers expected to hit the target so perfectly with Master Alwyn.  Every time I died, I was subjected to his taunting — he’d declare his gaming supremacy, or mock my arcade inadequacies. It really took me back to the days when when Beast was a huge presence in my gaming development, and while simply recalling those times was a pleasant bonus, it was even better to be able to finally get my revenge. Rating: 8 out of 10

Disclosures: This game is developed by Secret Location and published by Archiact. It is currently available on PSVR, Oculus Rift, and HTC Vive. This copy of the game was obtained via publisher and reviewed on the PSVR. Approximately 7 hours of play were devoted to the single-player mode, and the game was completed. There are no multiplayer modes.

Parents: According to the ESRB, this game is rated E10+ and contains Fantasy Violence, Mild Language, and Crude Humor. The crude humor includes some tame taunting, but a couple of enemies leave decapitated, bloody heads after they’re defeated. It can be a bit off-putting.

Deaf & Hard of Hearing Gamers: There are unfortunately no subtitles for the in-game dialogue.  However, the gameplay itself does not require any audio cues. That said, this game is not fully accessible.

Remappable Controls: No, there are no remappable controls.