A Waste of Talent and Clay 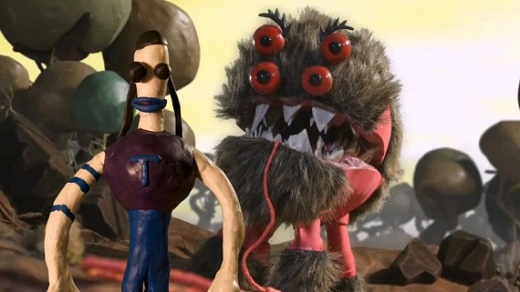 LOW: Hearing annoying cries as I do that one damned puzzle yet again.

WTF: Mike Nelson and Rob Paulsen were hired to voice the characters—and they aren’t given anything funny to say.

Cartoonist Doug TenNapel was a prominent figure in 90’s gaming. Best known for the outlandishly insane Earthworm Jim platformers, TenNapel was also responsible for the Claymation adventure game The Neverhood, which blended quirky humor with an unexpectedly deep tale of self-discovery and a unique reinterpretation of the Book of Genesis. While not commercially successful, it has gained a strong fanbase over the years thanks to its distinctive style.

In 2013, TenNapel announced that he was working on a spiritual successor called Armikrog. Not only would it be animated in Claymation, but the design team included Mike Dietz and Ed Schofield, both of whom had also worked on The Neverhood. After a successful Kickstarter campaign, the game spent two years in development before release, which apparently wasn’t enough time to create a satisfactory product—it’s a failure on almost every level.

From the start, Armikrog commits a huge sin by tricking players into thinking the game will be far more exciting than it is.

The opening is presented like a Saturday morning cartoon. After his ship crashes on planet Spiro 5, protagonist Tommy and his friend Beak-Beak try to stay alive while being pursued by a ravenous beast until they reach the safety of a fortress called Armikrog. Presented with the mystery of what awaits, players will most likely be eager to discover the implied secrets and dangers, only to be let down when they find out all that awaits is a banal slog.

One of the biggest issues is how little of Spiro 5 is revealed. Everything takes place in or around Armikrog, but it never gives players a chance to experience more of the planet. Occasionally some alien animal is encountered from a distance, but players never get to see just how strange this world is, and very few characters in the fortress speak to Tommy, with the exception of one near the end. If a game is going to have a restrictive environment, it needs to make every area engaging; Armikrog fails to deliver in that regard.

Further, Armikrog never effectively draws players into its story. There are attempts to create intrigue, but the presentation is too simple, never expanding on the mystery or the characters’ thoughts as they come across each new encounter. A villainous figure introduced in the final third of the game is shown to have a personal connection to Tommy, yet the history is never elaborated on, killing any chance at a sense of conflict. Even when characters die, there’s no weight since nothing has been done to make players empathize with them or their plight. When I finally reached the end the victory felt hollow, like I hadn’t gone through any serious struggle to achieve the goal.

Anyone who purchased Armikrog or backed it on Kickstarter expecting TenNapel’s signature humor will be disappointed—the game isn’t funny at all. None of the characters are given comedic lines, no wry commentary or innuendo is made when clicking on background objects, and the few jokes that I did come across were either simple toilet humor or unbelievably bad puns, the worst being ants dressed as U.S. presidents with names like “Thomas Jeffersant” and “Abrahant Lincoln.”

The gameplay is as flat as the rest, and the bulk of the puzzles rely on memorization rather than lateral thinking. Several paths can’t be opened until players arrange symbol tiles in the correct order, hints to which are usually given earlier and may need to be written down. That these puzzles are encountered so often indicates lazy design, as though the developers simply chose a handful of challenges and decided to use them as much as possible.

Occasionally, some sections require taking control of Beak-Beak. Since he’s smaller, Beak-Beak can pass through narrow tunnels that take him between rooms, reaching areas Tommy can’t. Beak-Beak can also “see” glowing symbols that provide solutions to later puzzles. These are fine concepts, but most of the time Beak-Beak is simply required to brainlessly press buttons.

My experience with Armikrog was further soured by glitches. Some bugs prevented the characters from pressing buttons no matter how often I clicked. Beak-Beak would sometimes fly in place without moving, and I got stuck in a segment where I was unable to leave because it didn’t register when I triggered a release lever. Most frustrating were the screen transitions that wouldn’t happen as I tried to pass from one area to the next. The game was patched after this review was written and some of these issues were fixed, but even remedying these technical flaws doesn’t salvage anything worthwhile.

Armikrog is a mess. Despite being in development for two years, the end product feels like a rushed demo with tiresome puzzles, unengaging story, and overall lack of polish. TenNapel and the team at Pencil Tech may have created some great games during the 90s, but they don’t appear to have kept up with the times. Anyone looking for a better example of TenNapel’s creative spark should seek out a copy of The Neverhood—it hasn’t aged perfectly, but it’s far more entertaining than this failed follow-up. Rating: 3 out of 10


Disclosures: This game was obtained from the publisher and played on PC. Approximately 5 hours of play were devoted to the game, and it was completed once. There is no multiplayer.

Parents: This game has not yet been rated by the ESRB or PEGI. Several flashbacks discuss characters dying or being murdered, and someone is vaporized near the end of the game, but no graphic violence is ever depicted on screen. There is an Easter egg early in the game that shows an alien creature being eaten by a much bigger monster and then defecated out.

Deaf/Hard of Hearing: One puzzle depends on matching symbols associated with specific words that are spoken without captions, making the game practically unwinnable to players who cannot hear what’s being said.