Little is more disappointing for me as a Deaf gamer than eagerly anticipating a new title, getting caught up in up how amazing it will be while I wait for release, and then being majorly let down by accessibility issues when it’s finally out. This has happened countless times, and it always seems to crop up with games I’m anticipating the most. 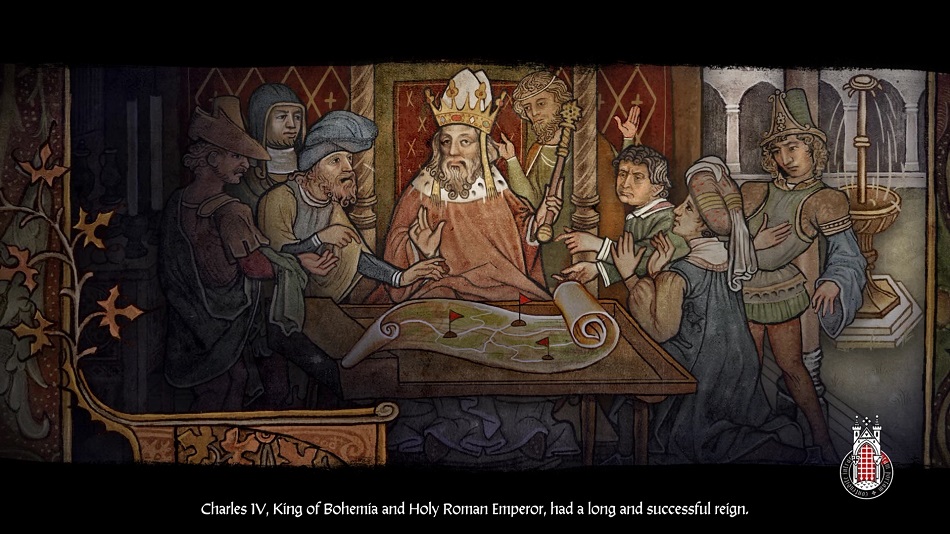 The game starts with promise, as it’s not super common for an opening cutscene or loading screen to have the voiceovers captioned. Here, it is. Added bonus? It’s legible! 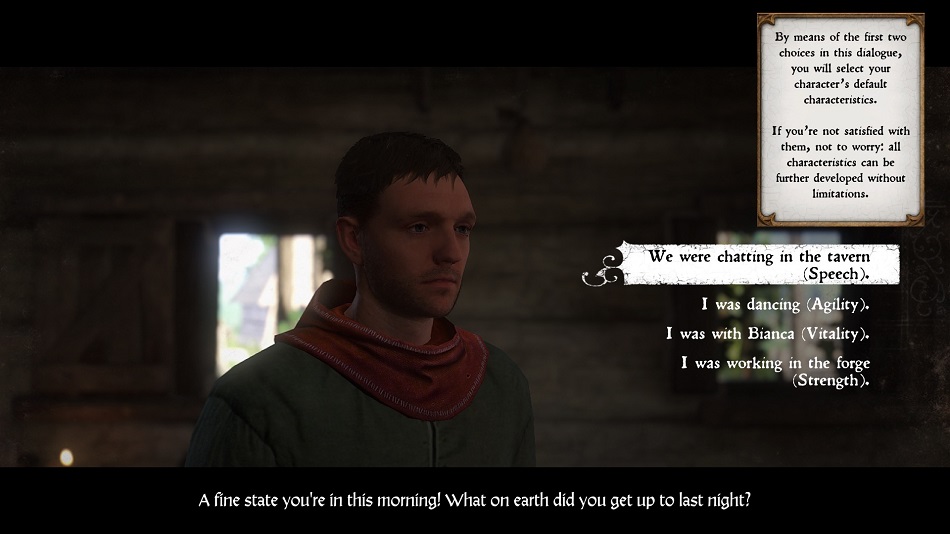 Equally promising are the easy-to-read dialogue choices and the text descriptions of the significance of those choices. 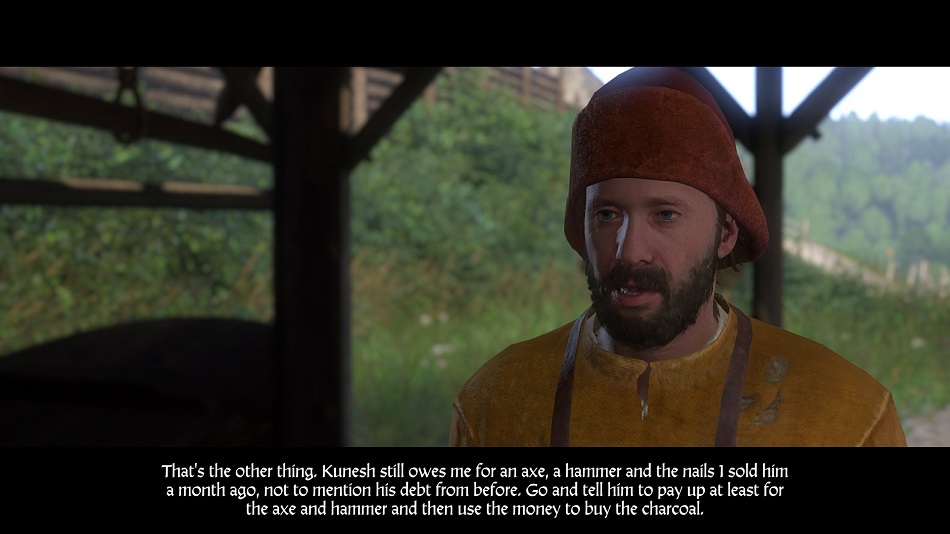 Main character Henry gets his lazy self out of bed and goes outside to talk to his father and still, legible subtitles! Would it be nice if these were scalable even though they’re large enough for me to read as-is? Sure. But having written about game accessibility for around four years now, I’ve learned to not hope for too much or I’m always going to be disappointed.

The first ten minutes of KC:D give a great first impression in terms of accessibility and I had high hopes for this historical RPG that I’ve been so excited to play. Unfortunately, things only go downhill from here.

Near the start of the game, Henry gets his orders from his father and sets out to complete his errands. Along the way, he talks to various townspeople, as one does when wandering a village in an RPG. The subtitle system for dialogue outside of cutscenes, while novel in its attempt to indicate directionality and distance of the dialogue, is absolutely useless. 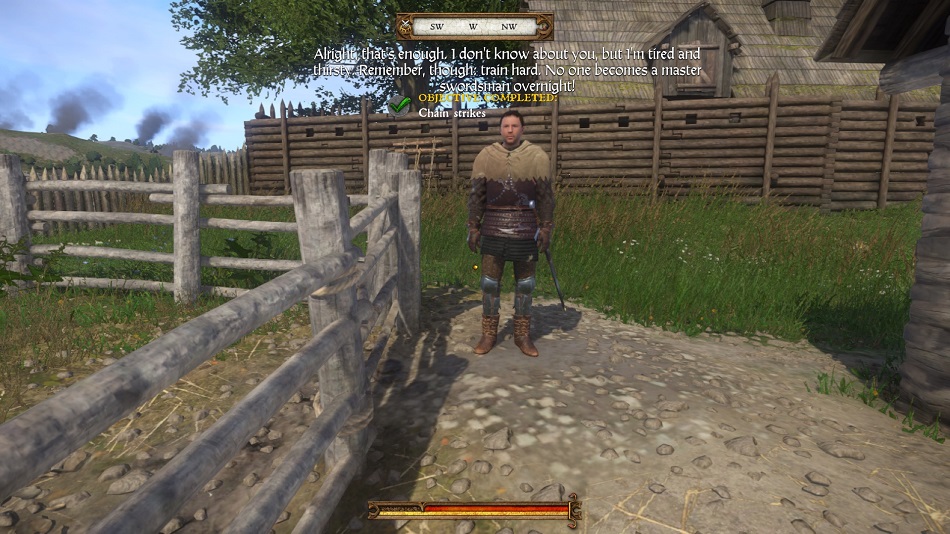 You can see in the above image that the text is large enough, but given that the subtitles are dependent on player position in relation to the NPC, I can’t read the white-on-light text, nor can I reposition myself to maneuver the text onto a darker background. 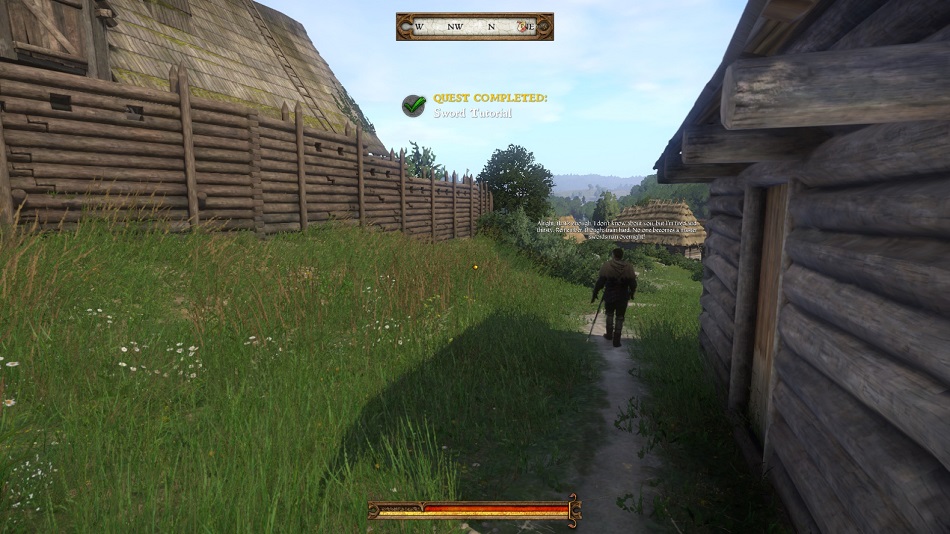 As my swordfighting trainer walks away, you can see (but not read!) the subtitles as they grow smaller and smaller. 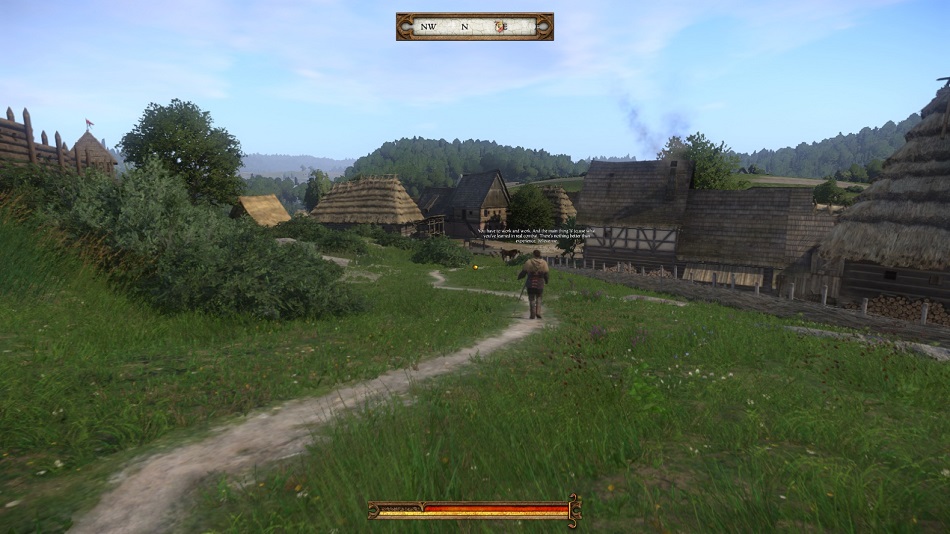 Since binoculars did not exist in this time period, I have no earthly idea what this man is saying to me, or if it’s of any importance. 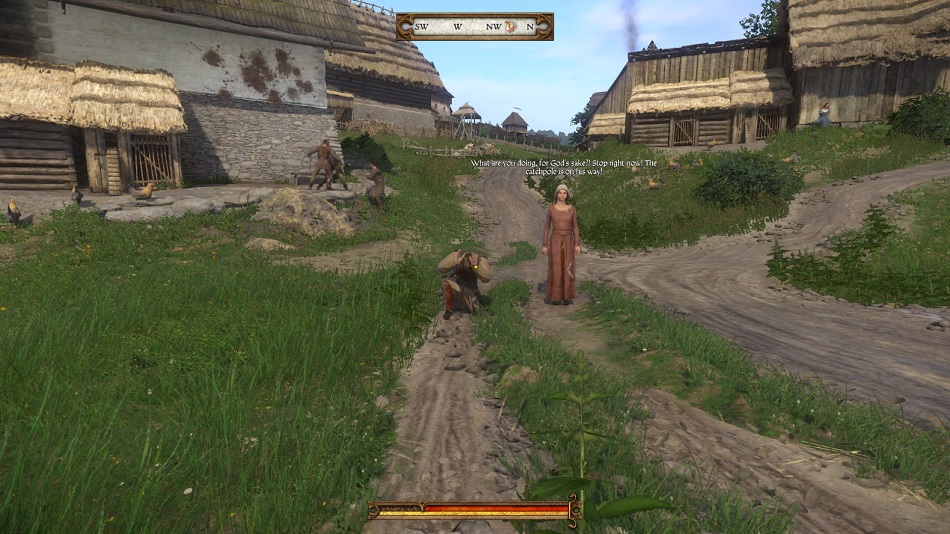 Another problem came when this kind lady appeared to warn me that the catchpole (a tax collector of sorts) was coming and I needed to run. I didn’t know what she was saying, by the time I was close enough to read the tiny text, the catchpole was there and I couldn’t escape. Because of how these subs are handled, I failed my mission goal which would have otherwise been easily achievable if the text was larger, more legible, and not dependent on my position in relation to her.

Next up were two quests which require audio to succeed. The first task was where I needed to find a spade to bury my parents with. It seemed straightforward, but I found myself wandering aimlessly for a bit, and had no clue how to progress. Unknown to me, there was a dog barking. I was supposed to listen for his barks and follow them to my goal. Luckily, I was able to accomplish this thanks to some walkthroughs other players had written. Without the walkthrough (and really, one shouldn’t have been necessary) this could have been remedied by having subtle visual indicators showing directionality, or perhaps controller vibration that grew in strength the closer I came to the dog.

The final, game-ending lack of accessibility came not even two hours into my playthrough. 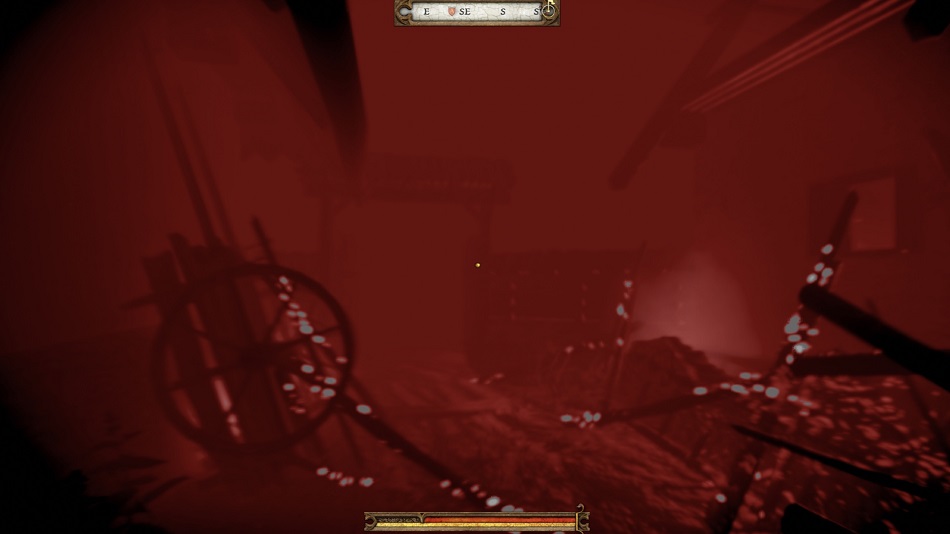 Here, I was presented with a dream sequence where I needed to find my parents, but the quest had distorted visuals that kept me from spotting any landmarks. With visual navigation rendered impossible, the only way to do this was to listen for their voices. 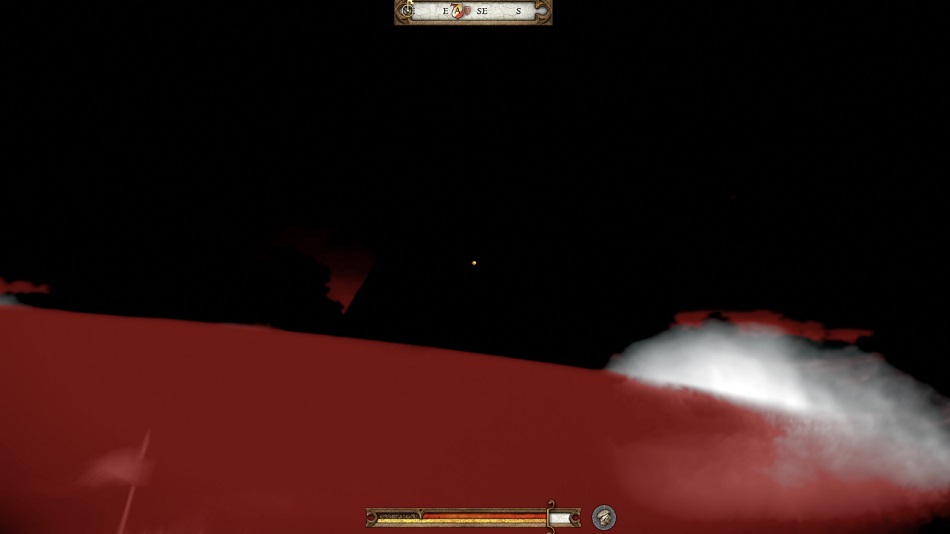 I remembered where they were before the dream but the terrible visuals and reliance on audio I couldn’t hear made this quest nearly impossible to complete. I did manage to eventually finish it, but only after I ran around for a length of time and happened to stumble upon them by accident.

I really wanted to like Kingdom Come: Deliverance. I’m a huge history nerd and the historical accuracy that’s gone into the creation of this RPG is impressive. However, the frustration I felt at its lack of accessibility made me turn it off and quit playing. I’m not a glutton for punishment, and when I’m at this much of a disadvantage in the opening hours of a game, I have no hope that the rest will be any better. Overall accessibility: UNPLAYABLE