Nothing Is As It Seems 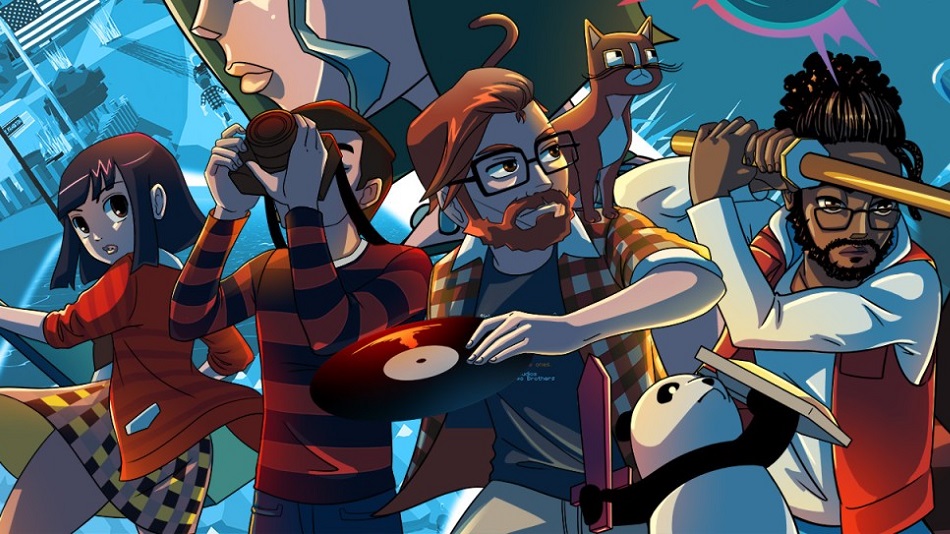 HIGH A well-realized story I connected with deeply.

YIIK (pronounced why-two-kay) is a turn-based JRPG where players follow a year in the life of Alex, a twentysomething coming back home from college. Upon his return, Alex finds things are not quite as they seem. He soon meets a girl in a run-down factory who is then ripped out of this world by strange star creatures. Alex teams up with old friends and internet strangers to find the girl and figure out the story behind the mysterious beings.

It’s clear that this game is inspired by the ’90s, and although I haven’t played it, reliable sources tell me it’s borrowing heavily from cult SNES classic Earthbound via its real-world setting. Players explore rural towns, malls, and gas stations instead of castles and forests. Characters use records, cameras, and foam weapons to fight underpaid cashiers and stop signs. Players explore a mall with shops like “Goth Topic” and record stores with songs from the “Backalley Boiz.” It’s all wonderfully strange yet ‘realistically’ familiar while avoiding the usual high fantasy or futuristic sci-fi themes I’m used to.

In a way, I felt like I was exploring my old hometown while playing. I knew the rich neighborhood, the downtrodden trailer park, and the downtown ‘trendy’ city area. Many story beats come from logging into the slow dial-up internet on Alex’s PC and being in chat rooms. Items to restore health are things like cheeseburgers or soda. Everything seems so… normal. 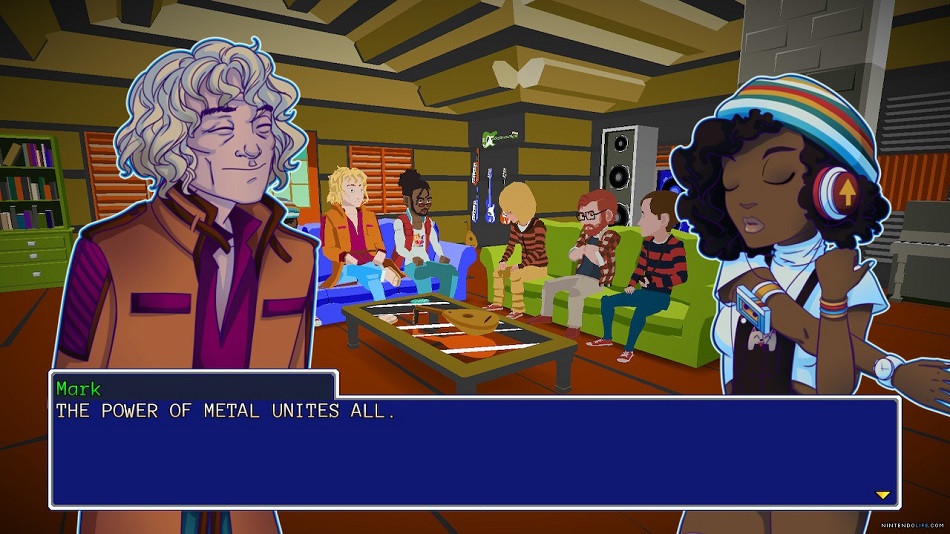 Going into restaurants, local stores, or pawn shops will give players access to new items and weapons, and combat is one of the unique quirks of YIIK. Most attacks are rhythmic minigames where players must press a button in time. When controlling Alex, players will have to hit colored sections of a spinning record. Another character spins a hula hoop. Some special attacks use bullet-hell shooting or 2D platforming. It’s a unique spin on JRPG combat that gives some much needed spice since every character has a different set of games to internalize.

While YIIK takes inspiration from older RPGs, it does include some quality-of-life improvements such as a hint option to remind players how to get back on track if they lose their place. While there are a small number of random encounters, grinding isn’t necessary to complete the game. There’s an assist mode which gives players an unlimited time meter to make sure they’re able to hit every attack and dodge every enemy during combat minigames. Unfortunately, while YIIK gets these things right, it makes mistakes in other areas.

For example, leveling up is a staple in RPG, but to do it in YIIK, players must find a phone, use it go into a separate area, and then assign an attribute to a door which Alex then goes into to level up that specific stat. While this doesn’t seem like a bad thing on the surface, leveling up shouldn’t take such a significant amount of time to do. Each level takes about 20-30 seconds, which translates to about 30-40 minutes over the course of the game which could have been spent with other content.

While combat is unique, it takes ages to get through a battle because the controls aren’t responsive enough. There were many times when I’d hit the button to dodge an attack, but the button press wouldn’t register for a moment or two, causing me to miss the mark, and each missed mark caused me to get a game over and replay longer battles. This also happens during attacking as well, causing many misses and dragging encounters out. On Switch in particular, the load times are appalling — it takes up to 20 seconds to go between locations or to go from the overworld into battle and back. At least 3-4 hours of my total playtime was just loading. 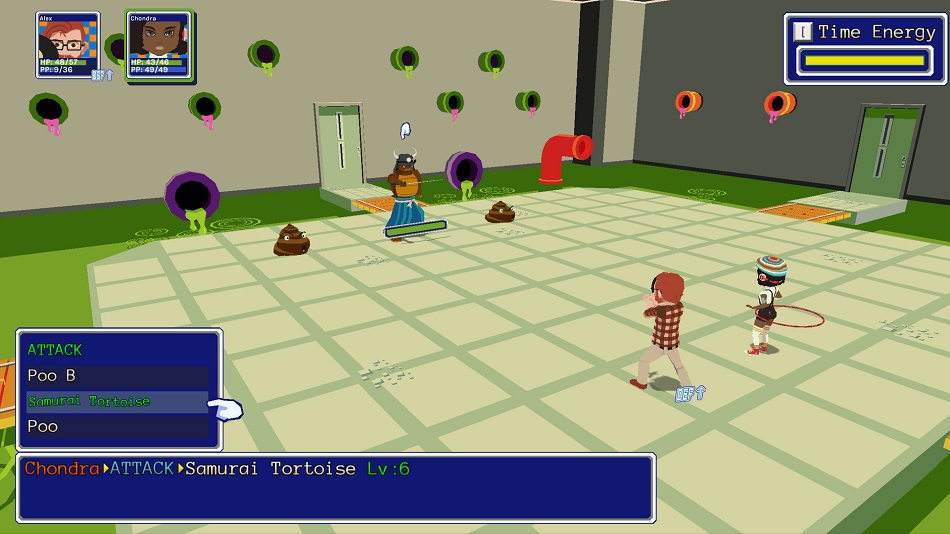 Like the game design, the story also makes some poor choices. A faux-online forum board where players can obtain sidequests and world lore also has posts that are just as toxic as anything on the internet today — one in particular had multiple users commenting that a poster should kill himself. YIIK also goes out of its way to stage a scene where a black character remarks on how funny it would be if ‘the black guy’ could pick a lock. Another scene has Alex talking referring to a different character as “vaguely ethnic”. The character comments back that he shouldn’t mention race again, and I couldn’t agree more.

Despite those distasteful aspects, YIIK kept my attention because so much of it echoes experiences I’ve had in real life. I knew people similar to the in-game photography enthusiast with a positive outlook, and the skeptical musician. I’ve hung out with friends at the local burger joint and spent time at the mall with a crew. For better or worse, I also saw some of myself in the main character of Alex — frankly, he’s rude, selfish, and has a ‘better than you’ attitude because he has a degree. He’s also self-centered to a fault, and tries to use flowery language to seem different and above everyone else. The similarities were uncomfortable, but I wanted to see the game through since the growth Alex shows over the course of the campaign echoed things in my own life.

As for the story itself, it wasn’t just about finding clues to a strange mystery, but it was also about how Alex grows throughout this strange year in his life. While the main focus is Alex, most of the narrative is carried by side characters and how they cope with things like the loss of a loved one, or big life changes like going to college. While highly unusual, the story does close with a ending that put my anxieties at ease.

YIIK: A Postmodern RPG is a bizarre title that connected with me on several levels despite a number of issues, and it kept me coming back until credits rolled. While it did take a significant amount of time to get to the ending, the characters and the themes of coping with loss and Alex’s growth made the investment of time worth the effort.That said, I don’t know if I would recommend this game to anyone but myself, yet it’s so strange and offbeat that I think there’s something worthwhile here to check out for everyone who’s not me. Rating: 7 out of 10

Disclosures: This game is developed by Acck Studios and published by Ysbryd Games. It is currently available on Steam and Switch. This game was obtained via publisher and reviewed on  Switch. Approximately 30 hours were spent in single player mode, and the game was completed. This game includes no multiplayer.

Parents: According to the ESRB, this game is rated M and contains Violence and Strong Language. Don’t let kids play this game. Many F*** and S*** are said between all of the characters. There’s plenty of violence, but it’s more the talking about suicide and language that seem to warrant most of the rating.

Deaf & Hard of Hearing Gamers: All dialogue in this game is in text boxes. There are no audio cues necessary for play. 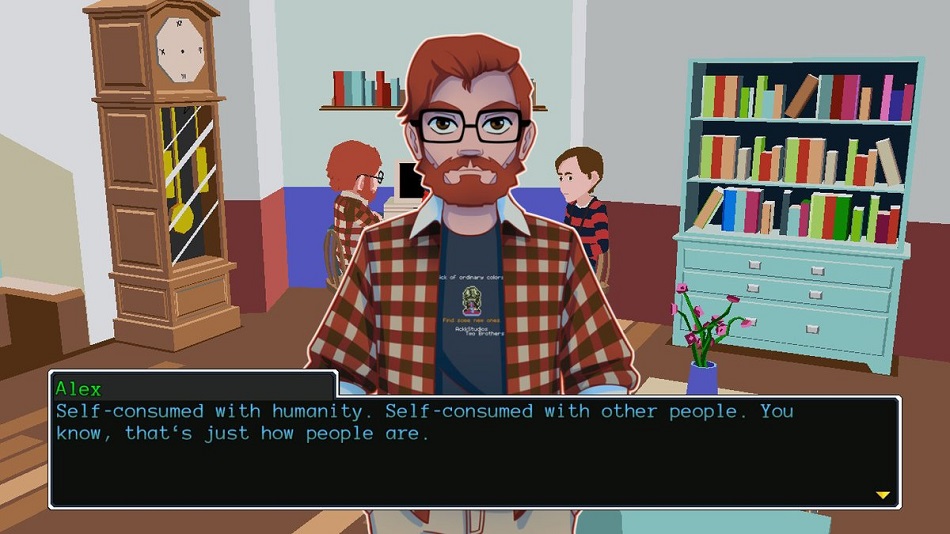 Remappable Controls:The game offers no remappable controls.There is no control diagram. Players move with the analogue stick, hit “A” to confirm choices, and hit “B” to cancel or go back a screen.

Good job on your review!

I actually found myself somewhat liking YIIK: A Postmodern RPG even though I’ve only known about the game through this review.

Your review really got me interested with the game, so I also checked other contents about it.

The character design of this colourful 3D Japanese-style RPG is kinda nice.

The characters of this game kinda managed to have distinct personalities even though they look like typical boy/girl next door kind of people.

And yeah, the music was outstanding!

I definitely agree that this game is not for everyone.