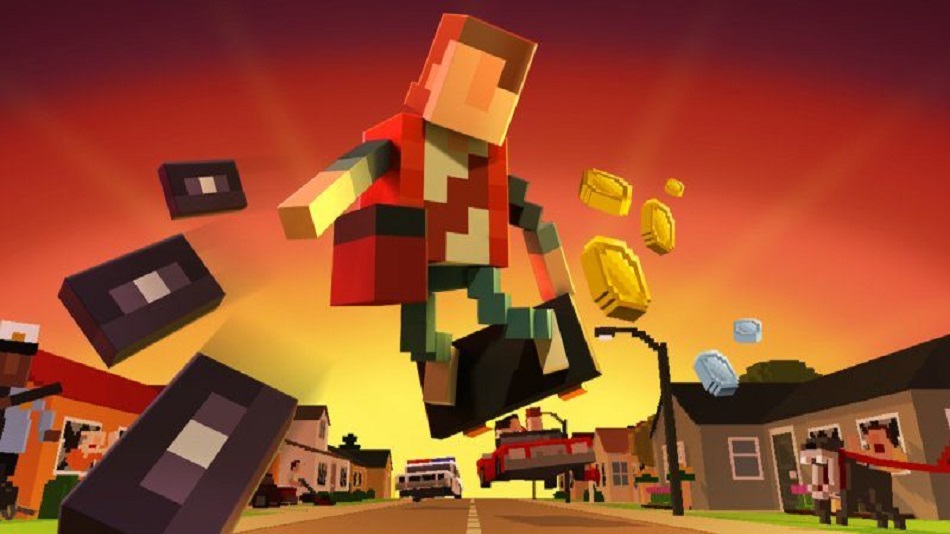 HIGH Addicting gameplay, and it’s quick to pick up.

LOW Far too short for its own good.

The Videokid is an arcade score-chasing game similar to 1985’s Paperboy. Players must deliver pirated VHS tapes to red mailboxes while dodging and jumping their way through ’80s references and obstacles. The goal? Reaching the end of his route and Jessica, the girl of the Videokid’s dreams.

The game is simple: one button jumps, one throws a video, and the player moves around to avoid obstacles. They’ll also be able to collect coins, dollars, and gems to spend on in-game items like new tricks and character skins, both of which are cosmetic only. There are also targets to hit and house windows to break, both increasing the player’s score and occasionally giving a little extra cash. If players hit an obstacle, the run is over and they must start over from the beginning. Thankfully, runs for The Videokid are quick, and it’s easy to jump back in after a fail. 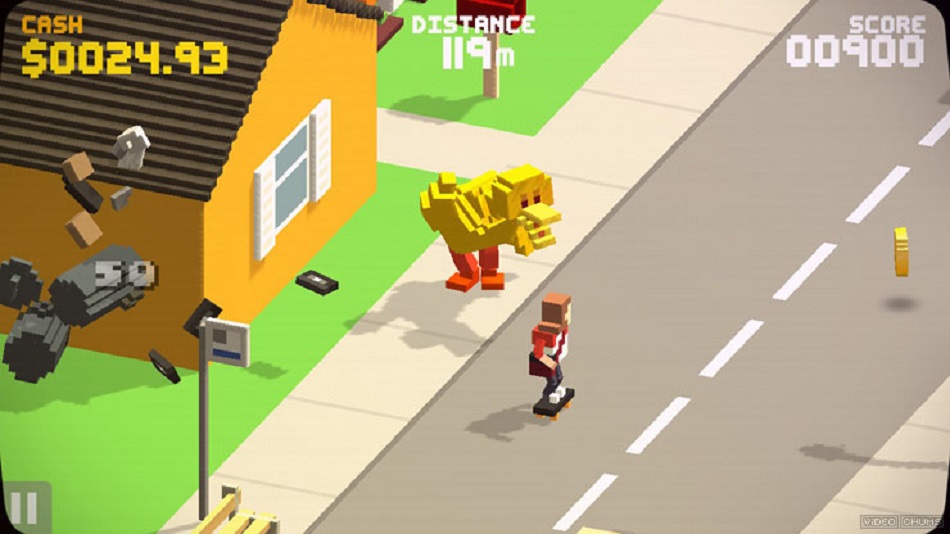 Most of The Videokid‘s charm comes from nostalgia — pixel graphics and overwhelming number of references to movies, cartoons, and other games flood the screen. Right out of the gate, players can throw a tape at Alvin and the Chipmunks to score some extra points. Later, players will grind across the the car from the movie Christmas Vacation. They’ll jump onto Herbie and throw a video between Ash from Evil Dead and Snake Plissken from Escape from New York. As this all happens the game references NBA Jam when the announcer tells players they’re on fire.  All the while, the main character is the spitting image of Marty McFly from Back to the Future.

While it’s aces for style, that’s about all there is to The Videokid.  It only has one road to travel down and all of the references in the game, each house to deliver to, and almost every obstacle is always in the same location. This isn’t necessarily a bad thing, but it’s also too safe — while other scorechase games have alternate modes, difficulty settings, or other tweaks to increase replay value, this game just has one course that unrolls in one way.

For a title on Switch, it’s great — do a run or two while waiting in line for the bus or commuting on a subway and then set it down. On console or PC, I’m not sure it would be worth the pricetag. Rating: 5 out of 10

Disclosures: This game is developed and published by PixelTrip Studios. It is currently available on PC, Xbox, and Switch . This game was obtained via publisher and reviewed on Switch. Approximately 3 hours were spent in single player mode, and the game was completed. There are no multiplayer modes.

Parents: According to the ESRB, this game is rated E10+ for Fantasy Violence. I mean, there are references to the A-Team and Miami Vice shooting at things, but that’s about it. No blood, no one actually gets shot, and I’d say it’s safe for everyone.

Deaf & Hard of Hearing Gamers: The only dialogue is via text that takes up a lot of the screen. The text cannot be resized, no audio cues are needed for play, and overall the game is fully accessible.

Controls: The controls are not remappable. Left and right move side to side, A jumps, and B throws videos.