In Space, No One Can Hear You Swear 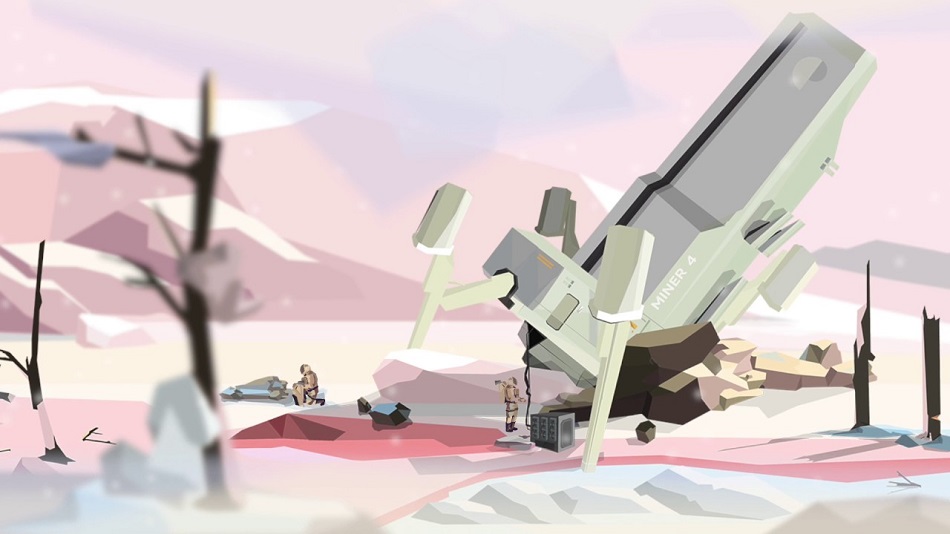 Low It’s also punishing to the point of frustration.

WTF Why is there a button to kill my people?

While Symmetry isn’t actually a puzzle game, I found the best way to look at it was as a puzzle. It had me swearing more often than I’d like to admit, but what I took away from it stayed with me long after. In a good way.

Symmetry is a strategy/survival game where the crew of a crashed spacecraft attempts to gather resources in order to escape the planet they’re stuck on before they freeze to death. Players are given a random group of three survivors, each with their own skills, and must balance factors like time, weather conditions, and the health/wellness of the people available in order to fix their ship and save their lives.

Characters can gather wood, produce food, or search for spare parts called electrowaste. Wood will help keep the heaters running inside the main base, and electrowaste is good for fixing the ship or the base when conditions on the planet start to bite. Symmetry also gives the option for characters to improve their own skills, or to learn new ones. There are many options here to help the crew work together and survive.

While the mechanics are simple, it’s ill advised to assume that the game will give players a break — one wrong decision could spell death and put players on a downward spiral to defeat in an instant.

For example, a weather tower can be built up to give players a helpful forecast. In one run, I decided to leave it at the starting level, which only tells the temperature. It wasn’t too cold, so I sent out a crew member to get on electrowaste collection a couple of hours early, only to have them quickly freeze when the morning brought a winter storm that I wasn’t expecting.

Trying to avoid the same fate in the future, I upgraded the weather tower on a new run. Knowing the weather patterns, I was more cautious when sending out crew, and I survived much longer. However, the planet was cooling as the days went on. Eventually, caution became my downfall — there wasn’t enough time to send anyone out for more supplies because the average temperature had dropped too low to survive.

Apart from the general difficulty, one issue I had with Symmetry was with the notifications that it gives. These popups tell players tell things like when weather conditions are severe, or when items are broken in the main base. Unfortunately, the text is tiny and incredibly difficult to read, even on bigger screens. Too many times I misread a notification that killed one of my best crew members, and once they were gone, it was almost impossible to recover from. I also ran into other technical issues, specifically with collision in the base — sometimes I couldn’t select a character to heal them or perform some other vital action because some part of the base was overlapping their model.

While these instances were frustrating and unfair, something that kept me coming back was that each character has their own unique story. Sometimes I’d start a game with Kate, a grad student who wanted to experience space travel firsthand. Other times I might have John, the pilot who couldn’t determine whether the crash was his fault. There are others, and trying to uncover their narratives was a big draw. Interestingly, these characters don’t specifically interact with each other to reveal these stories, instead they only speak in small, almost private diary-like entries which makes the human side of Symmetry feel lonely, in a way that’s perfect for this game.

Aesthetically, Symmetry is brilliant. The vector-like graphic style of squares and sharp edges is an unusual visual presentation, and a beautiful way to animate this desolate planet, placing focus on the stories and actions. There’s also almost no music in the game — just the sound of the wind and snow rushing across the planet’s surface.

Symmetry is a beautiful and deadly puzzle of survival that successfully emphasizes the loneliness and tension in this most dire of situations. However, the collision issues that affect the player’s controls and text notifications that are too difficult to read can turn this gripping experience into something intensely frustrating in an instant. For those willing to push through these rough edges, Symmetry is a unique experience that should not be missed. Rating: 7 out of 10

Disclosures:This game is developed by Sleepless Clinic and published by IMGN.PRO. It is currently available on XBO, PS4 and PC. This game was obtained via publisher and reviewed on PS4. Approximately 10 hours were spent in singleplayer mode, and the game was completed. There are no multiplayer modes.

Parents: According to the ESRB, this game is rated T and contains Blood and Violence. Most of these are seen in quick flashes where the world seems to “glitch” around the players. Most likely, the images of blood and violence will be missed unless you are specifically looking for them.

Deaf & Hard of Hearing Gamers: The game’s dialogue is all done via text, and audio chimes that signify player notifications are accompanied by visual cues. It’s fully accessible.