Green Is Good, Red Is Dead 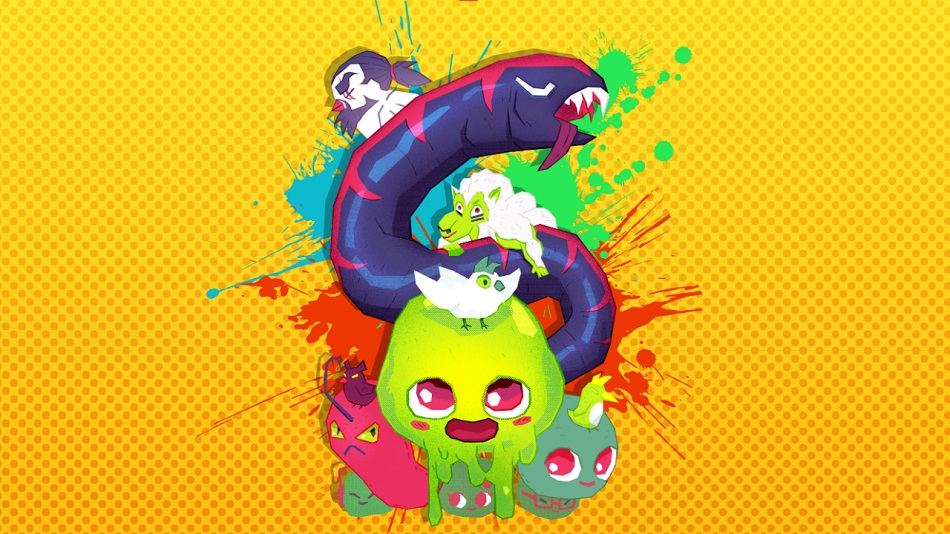 High Puzzle platforming at its finest.

Low Some of the puzzles are a bit obtuse.

Imagine this — it’s a beautiful summer afternoon. The birds are chirping, the sun is shining, there’s a warm breeze… and then a giant worm comes out of nowhere! That’s exactly what happened to Slime-San‘s gooey protagonist, and now it’s got to escape a giant worm before it’s digested.

Slime-San is a puzzle-platformer where each surface throughout the interior of the worm has some type of color associated with it. Slime-San can jump, dash, and climb to escape on white and green platforms. Players can also slow time to allow Slime-San to phase through green platforms. Anything red will explode Slime-San into a burst of goo.

Each level consists of four screens that focus on a particular skill. For example, one level will focus on wall jumps while the next may focus on timing an air dash. Each screen has a time limit before red stomach acid starts to envelop the area, so players must work quickly to reach the end. There’s also an apple in each screen, normally in a hard-to-reach place for collectors to try and obtain. Other levels also contain secret exits where players can find survivors that the worm has previously eaten.

Between platforming sections, players can visit “Slumptown”, a place where survivors go to avoid the worm’s stomach acid. As players collect apples, they can be traded in for different items including new playable characters, each of whom change the mechanics. Evil-San jumps higher and dashes further, but can’t walk. Fat-San walks and dashes slower, but can jump higher, and so on. 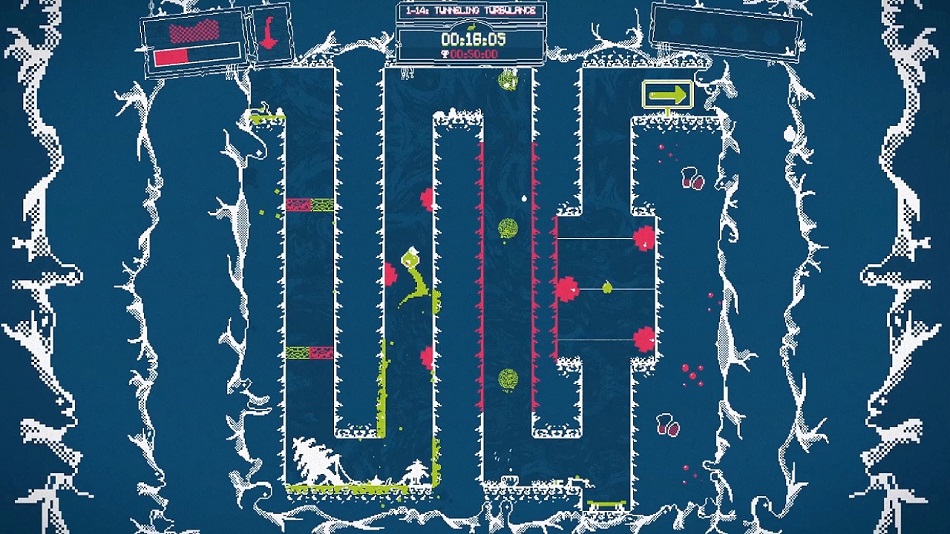 Allowing players to change their play style in this fashion is fantastic since this game is difficult. Not unfairly so, but it’s definitely a challenge. However, the curve feels almost perfect. Each level builds on the previous one, allowing players to practice each skill they learn throughout the adventure.

Once completed, Slime-San offers multiple modes that are unlocked. New Game+ has the same levels with added enemies and obstacles. Speedrun mode allows players to race in online leaderboards to see who can complete the game the fastest. The Superslime Edition also includes two extra DLC stories that were previously released, as well as challenge levels for players to conquer — there’s a lot of content packed in!

Also, it’s worth noting that the accessibility for Slime-San is some of the greatest I’ve seen in a long time. Since the levels are so focused on color, the devs offer numerous palettes to choose from, but also have the ability to change each color value to choose exactly which shade they’d like.

Is everything here great? Well, many of the puzzles are a bit obtuse when they first come up, and some take it to the point of frustration. There are also some enemies that kill momentum — one in particular is a smiling bomb. Get too close, and the bomb will explode. Don’t get close enough, and the bomb will float in the way of the exit. The gap between causing the bomb to explode but being far enough away to stay alive is so precise that these particular challenges felt like brick walls.

Slime-San: Superslime Edition is a gret puzzle-platformer that doesn’t try to be anything more than it is, and the content is perfectly executed by being easy to start and difficult to master, and it offers enough content to keep players coming back for hours. Rating: 8 out of 10

Disclosures: This game is developed by Fabraz and published by Headup Game Studios. It is currently available on Steam, Xbox One, Switch, and PS4. This game was obtained via publisher and reviewed on PS4. Approximately 12 hours were spent in single player mode, and the game was completed. There is no multiplayer modes.

Parents: The ESRB website rates this game as E10+ and includes Crude Humor, Fantasy Violence, and Mild Suggestive Themes, but in my view there’s nothing here to make it rise above an E for Everyone. As far as I’m concerned, this is approved for all ages.

Colorblind Modes: Color being one of the most important parts of this game, SlimeSan: Superslinme Edition offers many colorblind options.

Deaf & Hard of Hearing Gamers: All dialogue is conveyed through through text boxes, and there are no audio cues necessary for play. It’s fully accessible. 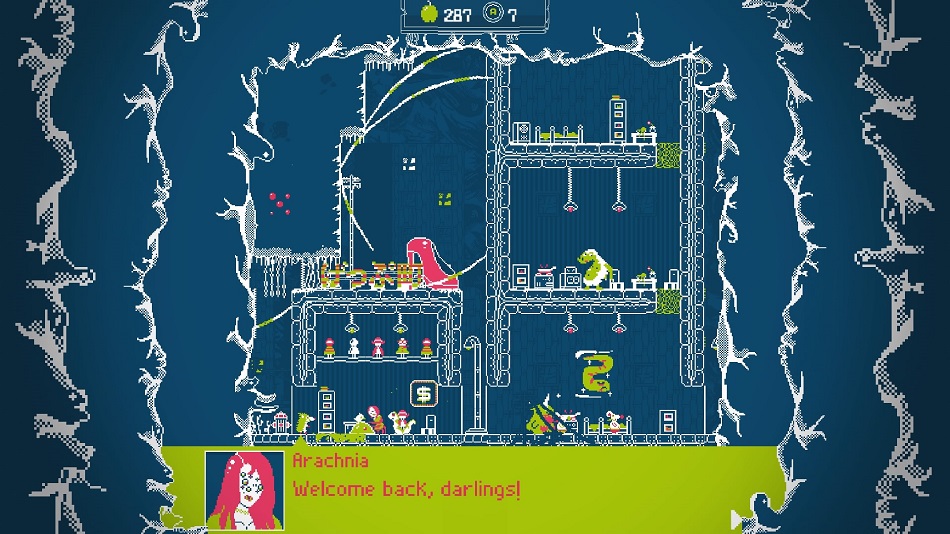 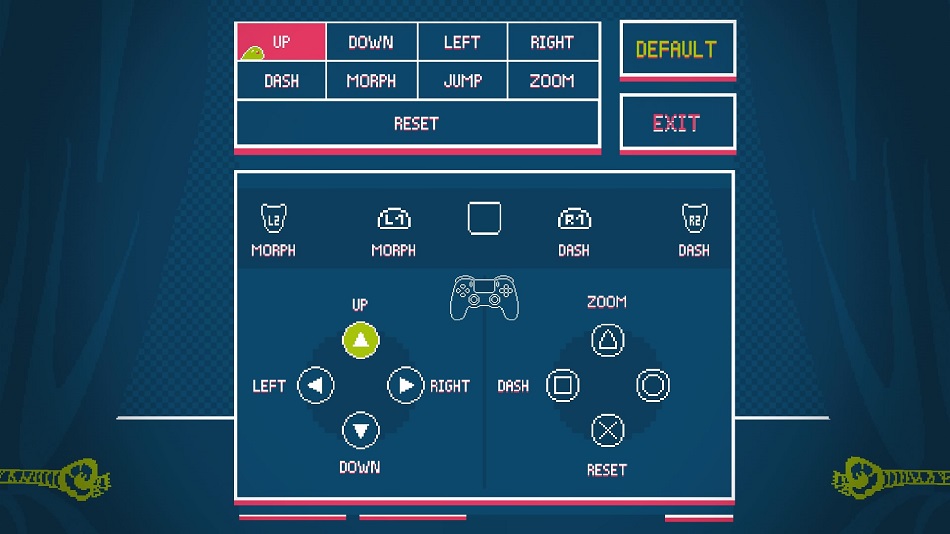