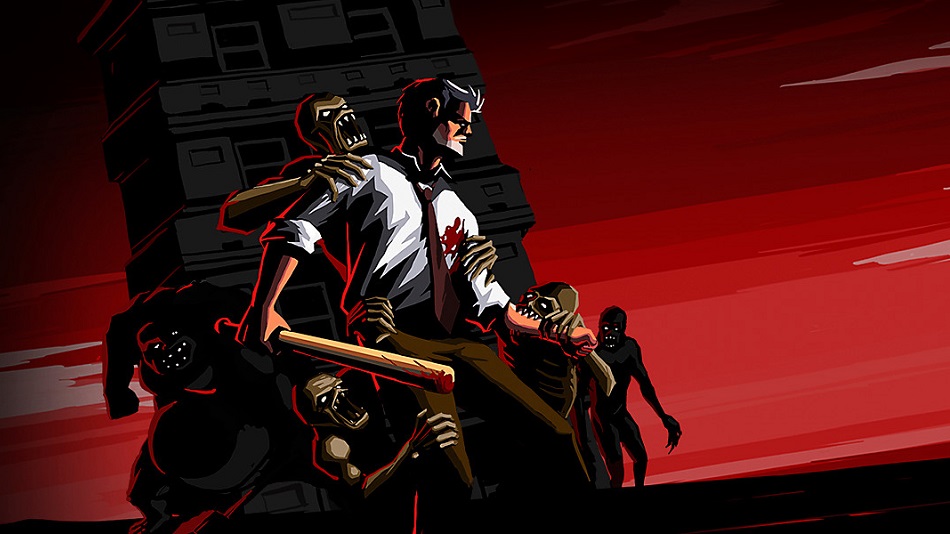 LOW Surviving isn’t much of a challenge.

WTF No, I will not trade a sword for fruit salad!

On a business trip, Perry Jackson decides to treat himself by spending a couple of nights in the Skyhill Hotel’s luxury penthouse suite. Unexpectedly, nuclear bombs dropped while he was there — the hotel’s defense grid was online so he survived the blast, but the screams coming from other guests below let him know that it won’t be as easy to leave Skyhill as it was to check in.

Skyhill is a roguelike RPG developed by Mandragora. Players control Perry as he tries to escape Skyhill Hotel in a 2D point-and-click adventure through 100 floors of mutants and death. Along the way players will scavenge for food, materials, and weapons. Each resource can be modified for greater effect, Perry’s combat skills can increase, and the penthouse can be upgraded to help Perry to survive just a bit longer.

Combat is turn-based. Depending on the player’s stats during a run, they’ll have a percentage chance to hit the mutant they’re fighting, altered by whether they’re aiming for the head or the body. Depending on the mutant, they may act differently once attacked — an enemy that towers over Perry may shrink down to his level while increasing his attack speed and damage, another mutant has a chance to blow up and poison Perry once it gets to half health, and so on. 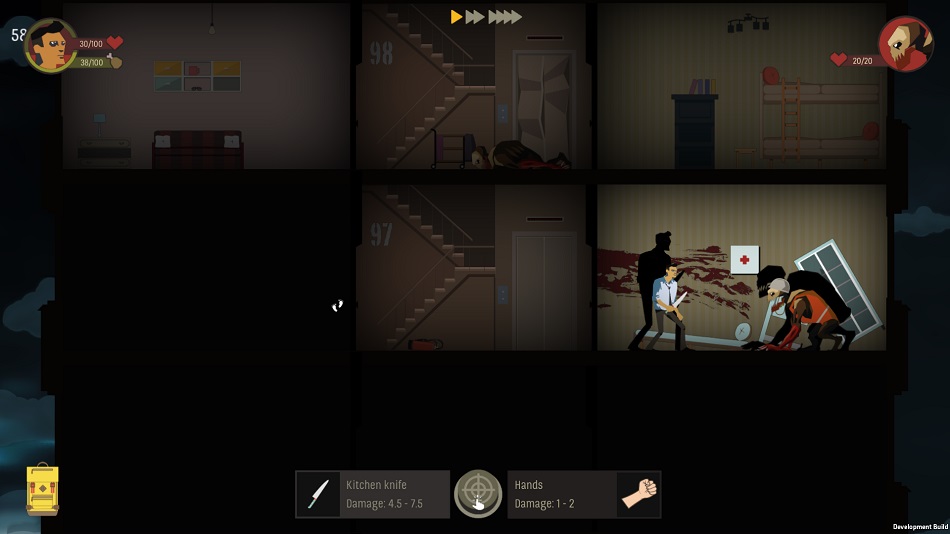 After a few runs, players will start to unlock perks that change the rules of the game, some active, some passive. For example, one perk will give players increased damage while in hotel rooms, but decreased damage while in stairwells. Another will allow players to eat rotten food without penalty, but will take significantly more damage if the player starves. Others include things like a one-time heal back to full health or hunger, or a free upgrade to the penthouse at the start of a run.

While advertised as a survival game, inconsistency plagues Skyhill. For example, some runs showered me with resources from the get-go, while others suffocated me for the first ten floors. I understand survival games (especially roguelikes) usually factor in randomness, but there should at least be a chance to survive most runs, even with limited resources.

Also inconsistent were elevator panels throughout the hotel which can be fixed for a quick shortcut back to the penthouse. If players have the necessary resource, they can fix it successfully. If they lack the resource and want to try and fix it anyway, they risk a minor penalty or failing the repair altogether. However, even when I failed to fix the panel, the penalty never came into play, and most of the time I fixed the panel without the required resource. Why? No idea. 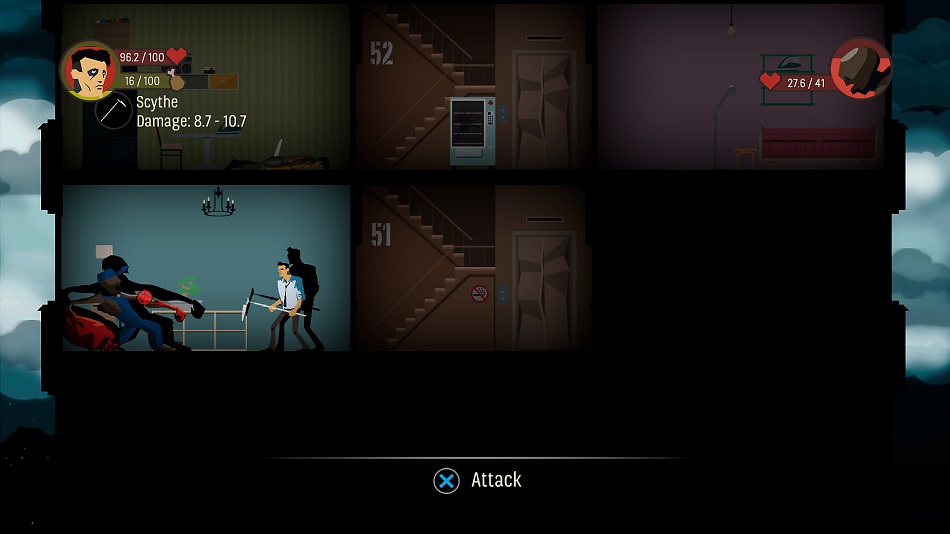 There’s also a survivor that will trade for food or weapons with Perry once per run on a random floor, but inconsistency reveals itself again — if players get a bad deal, then the survivor is useless for the rest of the game as he only has one deal per run. I only ended up taking the deal a handful of times — partly due to lack of resources, but also because the deal he offered was sometimes a significant hit against me.

Puting inconsistencies aside, a strange choice for Skyhill is the user interface that the PS4 version uses. The game had two versions before coming to console, both PC and mobile, and each one is quite different from the other. The PC version looks cleaner and more appropriate for a larger screen, while the mobile version is obviously meant for smaller screens and the touch capabilities. Bizarrely, the PS4 version uses the mobile interface!

Skyhill is a decently short game that can be played in bursts, and despite the inconsistencies and annoying interface, I enjoyed it and was curious enough to see it through to the end. (And there are multiple endings.) However, the ‘survival’ aspect feels nonexistent — my runs were either doomed from the beginning or flawless victories, and I can’t wholeheartedly recommend something so unbalanced from one run to the next. Rating: 4 out of 10

Disclosures: This game is developed by Mandragora and published by Daedalic Entertainment. It is currently available on PS4, Steam and Mobile. This game was obtained via publisher and reviewed on PS4. Approximately 8 hours were spent in single player mode, and the game was completed. This game includes no multiplayer.

Parents: The ESRB does not seem to have a rating for this game. However, this game  contains Violence, Blood, and Language. There is death in this game, and many of the bodies will leave bloody corpses. Some events will have players finding dead bodies with blood writing on the walls behind them, along with occasional language (S*** and D*** mostly). It’s perfectly fine for teenage and above audiences.

Deaf & Hard of Hearing Gamers: All dialogue is in the game is done via comic panels, so all voiced lines are represented as captions on the panel. There are no audio cues necessary for gameplay. Text is not resizable. 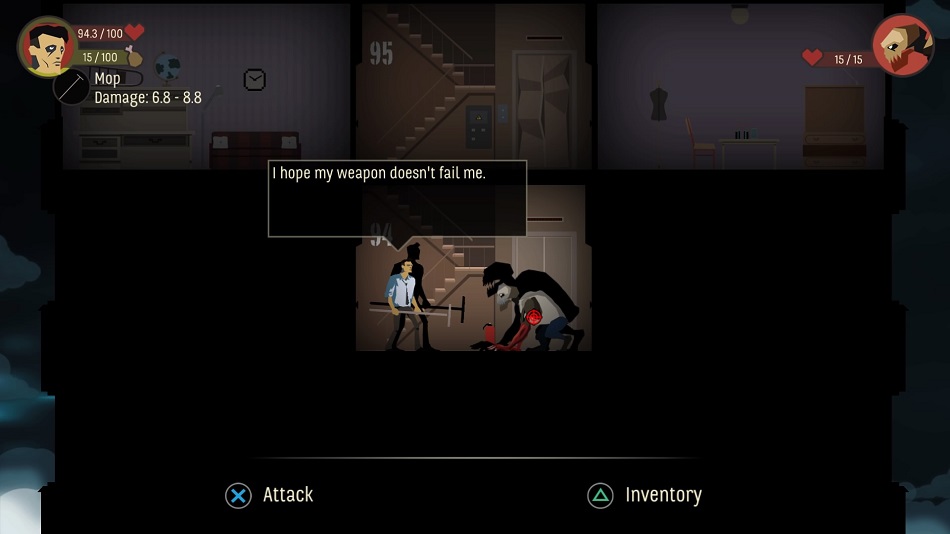 Remappable Controls: The game offers no remappable controls. There is no control diagram. Players can use the analog stick to move, X to select a room/item and circle to cancel.