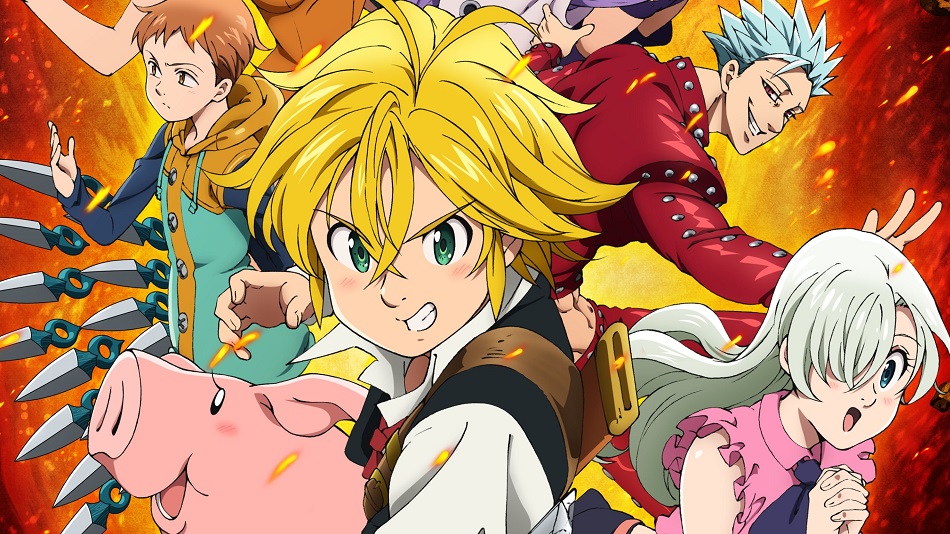 High An anime take on medieval Britain and King Arthur.

Low The game only recaps the anime, and not much else.

WTF Owning a bar that is the hat of a giant pig is normal in this world.

Seven Deadly Sins: Knights Of Britannia is a fairly new manga series that was turned into an anime back in 2014. It follows the titular Seven Deadly Sins — powerful knights who are fighting to take back their Kingdom.

SDSKoB is a third-person fighting game. In Adventure mode, players will take control of  the captain of the Sins, Melodias (and his pig Hawke) as they fight enemies while they search for the other Sins. Later missions will allow players to control one of the other Sins as they’re unlocked, while others put players in the shoes of Princess Elizabeth to dodge enemies and collect material for crafting. Duel mode allows a team of players to fight against the AI, each other, or online against another team of two.

It’s tough to figure out how SDSKoB stacks up against other fighters. While it tries to be more of a brawler allowing players to cut through scores of enemies, the closed arenas and lack of numbers makes it feel more like being a bully to a bunch of schoolkids. It doesn’t quite go far enough the other way to be considered a traditional fighter, though — there are just too many missions that pit characters against swarms of nameless enemies. Occasionally powerful Holy Knight captains will show up and go toe-to-toe with the player, but these sequences feel almost too open, and have enough room to get out of danger easily. The gathering missions with Princess Elizabeth are also out of place for a fighter since she can’t attack on her own.

Combat consists of melee attacks (light, heavy, and ranged) and a magic version of each while having multiple quick-movement options to traverse arenas. Character types give the game a bit of variety with the expected archetypes — speed characters move quickly and do decent damage, while power characters move slowly and have massive power. Magic characters can use their special moves more frequently, but have a mana gauge that has to be managed. While this makes the combat seem to offer many options, strategy is only skin deep. Playing through the story mode, I was able to beat most missions by using the heavy attack almost exclusively. The game also seems to favor speed characters in general. 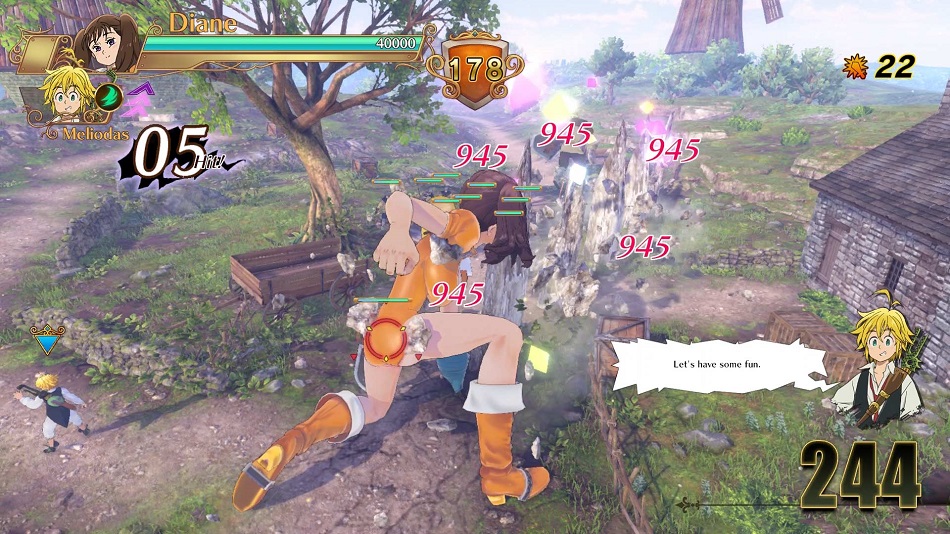 While the overall design is a bit odd and the character balancing needs work, what really condemns SDSKoB is the lack of challenge. Save for the final boss (which has a one hit KO move that no one else in the game has) the difficulty of each mission was trivial. Same goes for the crafting system — getting materials for better items feels like prescripted grocery shopping instead of the game letting me explore the system and feel clever for figuring things out on my own.

Graphically, SDSKoB isn’t great. The models for each character are well made, but none of the characters show emotion in cutscenes, and everyone looks bored all the time. Further, for being an action anime similar to Naruto or Dragonball, the game should feel exciting, and feature plenty of flashy, powerful attacks. In practice, it feels like everyone is fighting underwater —  everything is languidly muted, and lacking the expected punch.

While what I’ve outlined so far is pretty subpar, what I can’t decide is whether playing the entirety of the anime is a good thing or not. I knew of the series before the game came out, but had not experienced it myself. I watched a bit of the show after finishing the campaign, and then realized that it was, almost exactly point-for-point, a straight recreation of the anime itself. There are no side stories or “what if” fights here, so the value of playing through something someone could simply watch is debatable.

Seven Deadly Sins: Knights of Britannia is a perfectly functional game, but those unfamiliar with the IP should probably watch or read the series instead — the lack of depth and content makes it hard to recommend to anyone except perhaps for the most hardcore of fans. Rating: 3.5 out of 10

Disclosures:This game is developed by Natsume Atari and published by Bandai Namco Entertainment. It is currently available on PS4. This game was obtained via publisher and reviewed on PS4. Approximately  7 hours were spent in single player mode, and the game was completed. The game offers co-op for up to four players, but no time was spent with this mode.

Parents: According to the ESRB, this game is rated T and contains Violence, Alcohol Reference, Mild Language, and Suggestive Themes. It feels reminiscent of a medieval war with some super powered knights. There weren’t any serious swears (no s**t, f***, etc) and the violence is more anime than gory. Some of the female characters wear things that are a bit tight fitting, but nothing is very revealing. Nothing that would make it PG13, surely.

Deaf & Hard of Hearing Gamers: Dialogue is voiced in Japanese, with English subtitles. There are no audio cues necessary for gameplay. It’s fully accessible. 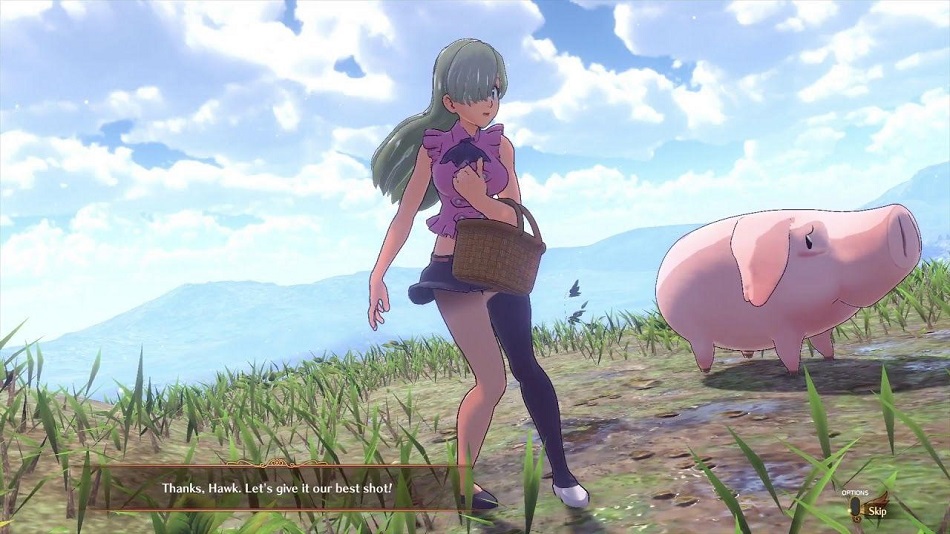 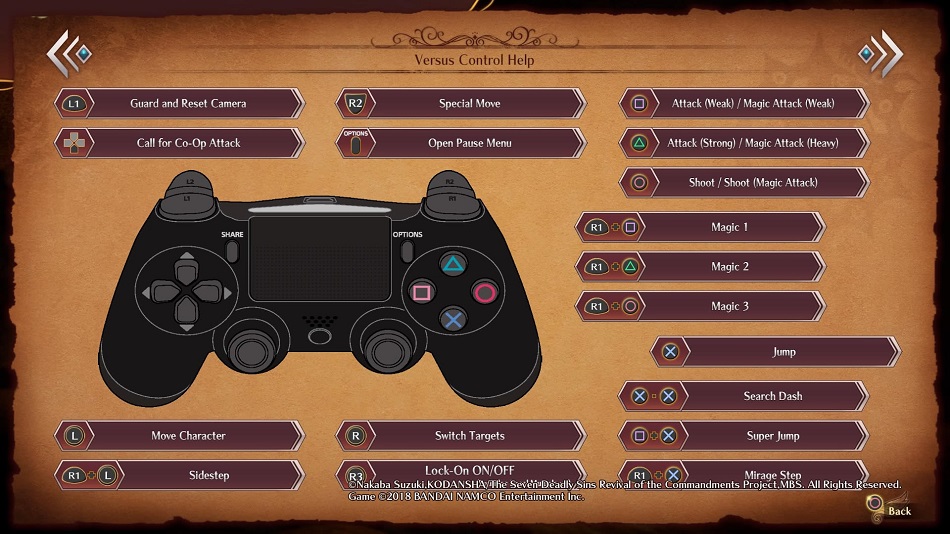