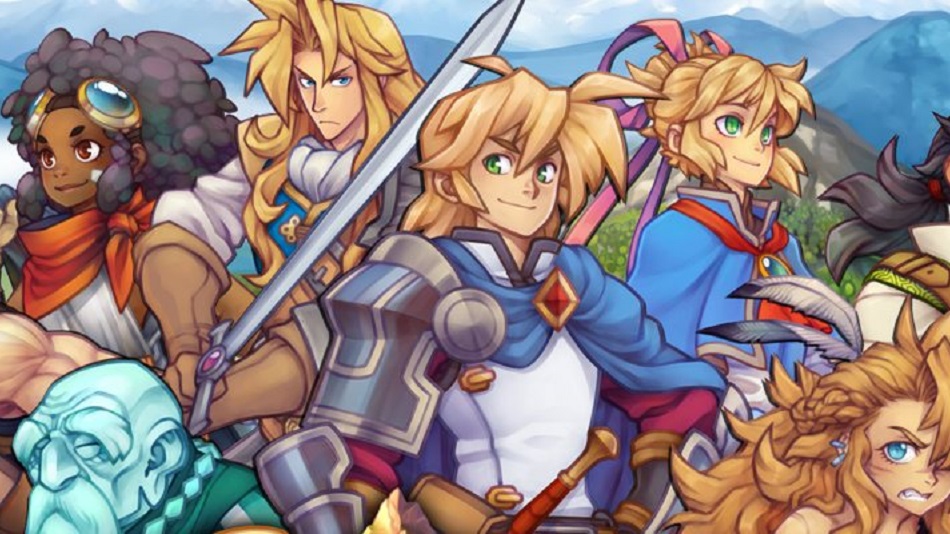 HIGH It’s a concise RPG brimming with content and character.

LOW  The fixed camera makes it hard to see what’s going on.

WTF The quest to prove to a zombie that he’s dead.

RPGs are a lot of give and take. Or rather, they’re take and give. They generally take up a ton of someone’s free time, but in return, they give a wealth of character stories, in-depth narratives and flashy cutscenes. That time commitment can be a struggle for some, though. With this in mind, it’s a delight to find an RPG like Regalia: Of Men and Monarchs that provides plenty of give with a quality story, tons of content and a masterful tactical combat system and comes with only half of the take.

Long ago, a war razed a city called Ascalia to the ground. Kay of House Loren is told by his dying father that Ascalia belongs to them, and that Kay will inherit it. With his bodyguard Griffith and his two sisters, Kay travels to Ascalia to find the town still in ruins, and now there are debt collectors at the door wanting the dues accrued from his ancestor’s defeat. Kay then works to bring the kingdom back to its former glory and to pay off the debts of his family.

Regalia is part tactics RPG, part kingdom management. During each chapter of the story, players have a time limit to complete quests and explore the land in order to keep the debt collectors at bay. These quests vary between exploring nearby territories, rebuilding the castle itself, and increasing Kay’s reputation with those who live within Ascalia – important since increasing rep provides new strength and abilities to the party, thereby increasing their ability to fight and explore around the continent.

The characters in Regalia are some of the most unique that I’ve seen in some time, and each has their own personality and story to tell. For example, the royal bodyguard Griffith talks as if everyone were of noble blood, while everyone else converses normally. Elves, normally seen as elegant spell casters, are depicted as brutish arctic berserkers. 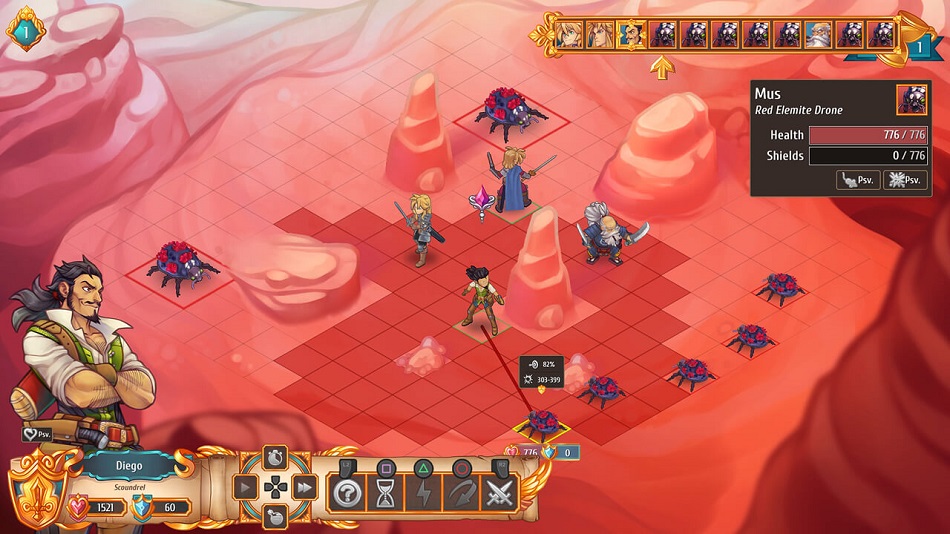 There are also moments when the cast will argue with each other about topics that define their identities – one exchange about the meaning of duty stood out due to how it evolved over time. While Griffith chose his duty to House Loren, Levant (a fallen knight) was born into his order. How they view the same concept in vastly different ways defines their relationship to each other and to Kay.   There are some RPGs where ‘building a relationship’ is a chore motivated by grinding for stats and abilities, but here it’s a pleasure.

Like the characters, the dungeons also stray away from the standard tactical RPG offerings. In Regalia, dungeons are a mix of combat encounters, story instances, and rest areas.

Combat is turn-based tactics, moving players around a grid and trying to outmaneuver enemies. However, if a party member falls, they do not respawn after battle. To get them back, players will have to rest at a camp area or leave the dungeon.

Every party member plays differently, and any combination of characters can be a viable strategy to victory. It’s possible to build a team that focuses on raising shields and supporting one central tank member. Likewise, building a team of ranged and magic characters is also viable. Building a team relying on hit and run tactics with more mobile characters is equally successful. No character felt useless, and I found myself using a different party for every dungeon.

Story instances are quick ‘choose-your-own-adventure’ narratives that can give additional combat encounters or provide experience and items without a fight. Players read a scene and make a decision which can affect Kay’s relationship with the members of his party, and this increase (or decrease) in the bond with each character can help or hurt the party. 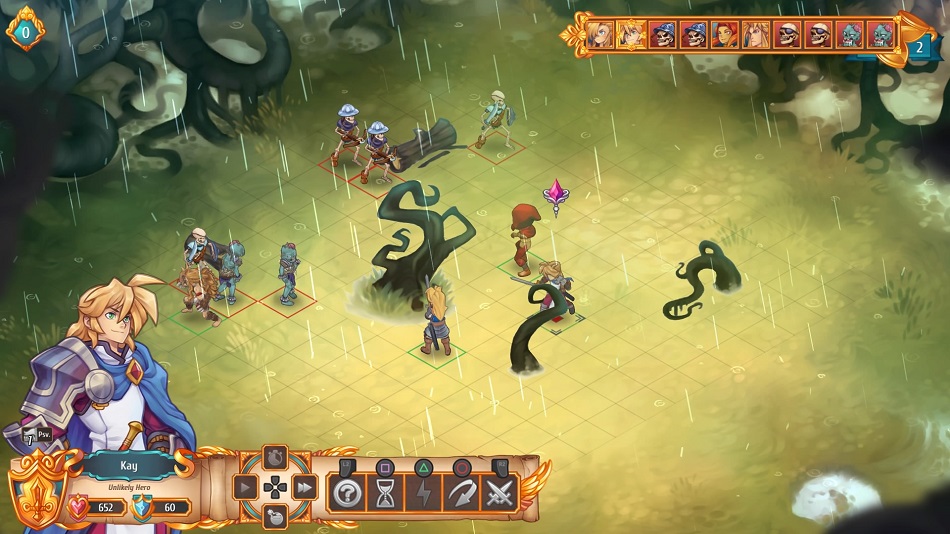 Rest areas are points in the dungeon that allow players to rest and revive fallen characters, and save the game (which can’t be done in the dungeon otherwise). Players may have one or two rest areas per dungeon, and can only revive characters once per rest area.

Between its unique characters and well-executed combat Regalia already shines, but it does even moreso with how considerate it is of a player’s time. Primarily, it cuts out the grinding aspect many RPGs have by have offering a “party level” instead of individual character levels. This party level affects all characters the player can use, so players don’t need to grind EXP for characters who join later in the campaign. Also, any cutscene can be skipped and will be followed with a summary of what happened, as long as there isn’t a choice for the character to make.

While Regalia gets so much right, it’s not without a few flaws. Primarily, the camera during combat scenarios isn’t completely top-down, so obstacles on the battlefield can make it difficult to see where players can move their characters. Additionally, friendly fire is always active, so it can be a nasty surprise to see that an overlooked ally was in the area of another’s attack. Luckily, players are able to ‘undo’ movement as long as they don’t use an ability or attack, so it’s able to be managed. A smaller complaint is that some post-dungeon cutscenes can be triggered to show characters who weren’t in the party at the time. Easily overlooked, but still something I noticed.

Overall, Regalia is a beautiful adventure where each action the player takes accomplishes something, and it feels like every part of the experience has something to offer. The cast of characters and surprising story (no spoilers here!) show the developers’ dedication to both tactical RPGs and their narrative. Much credit is also given for its brevity – Rare is the RPG that gives more than it takes, but this is one case where I’d say the game is genuinely worth replaying to see the sum total of its content. From nearly any perspective and to nearly every player, Regalia: of Men and Monarchs is something I absolutely recommend. Rating: 9 out of 10

Disclosures: This game is developed by Pixelated Milk and published by Crunching Koalas. It is currently available on PS4, XBO and Switch. This game was obtained via publisher and reviewed on PS4. Approximately 22 hours were spent in single player mode, and the game was completed. This game includes no multiplayer.

Parents: According to the ESRB, this game is rated T and contains Sexual Themes, Fantasy Violence, Blood, Language, and Alcohol References. Some of the female characters wear things that are a bit tight-fitting, but nothing is very revealing. The game is knights fighting monsters, and that makes up most of the blood and violence. In town, there is a bar that characters drink at, and there are no f*** in the game, but some characters swear occasionally (not frequently). It’s about the level of a PG13 movie, more or less.

Deaf & Hard of Hearing Gamers: Dialogue is voiced in English, but also includes subtitles for all dialogue. There are no audio cues necessary for gameplay, and the text cannot be resized. It’s fully accessible. 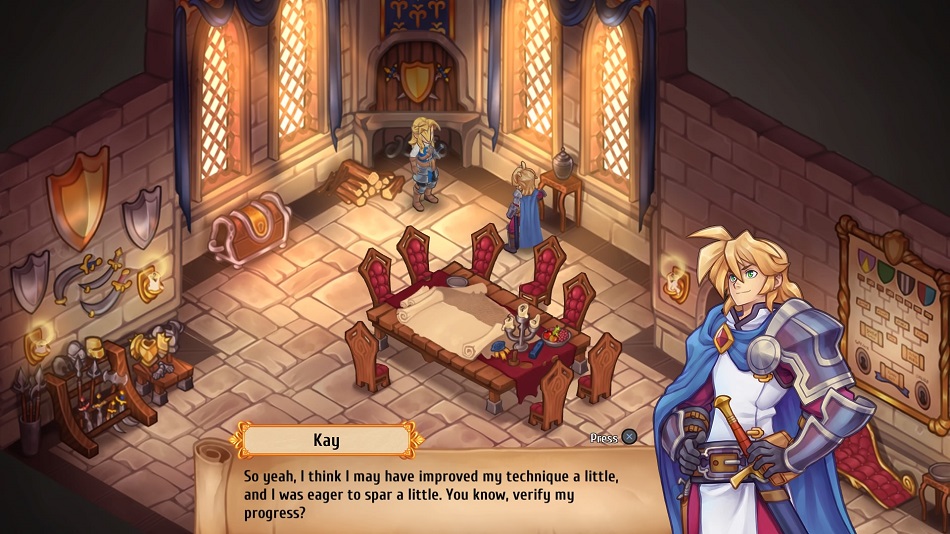 Remappable Controls: The game offers no remappable controls. There is no control diagram. In towns, X is select, O is cancel, the touchpad opens the party menu (to check quests, change skills, etc), and Triangle will open the calendar to see which person is available to spend time with on which day. In Battle, X is select, O is cancel, Triangle to use Authority points. R2 opens the attack selection menu, L2 brings up the status menu (showing what statuses are affecting which characters on the battlefield), and press right or left on the D-Pad to control combat speed.