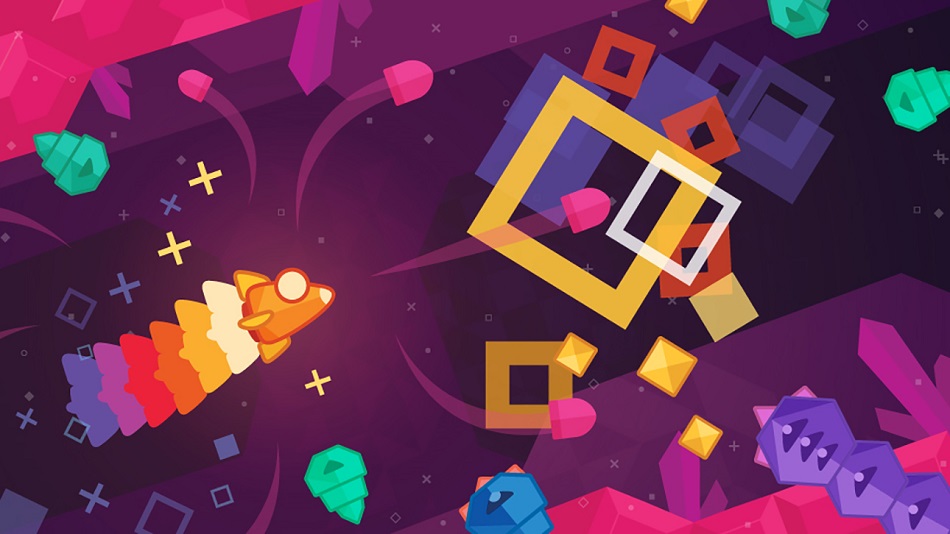 Low The game becomes too repetitive about halfway through.

2D shoot-’em-ups don’t register on my radar too often, but every now and again I have the itch to climb leaderboards and test my skill at stringing kills together to keep a combo multiplier rising. On top of racking up big numbers, Graceful Explosion Machine promised aliens to shoot, vibrant atmospheres to speed through, and unique weapons, and I’m happy to say that the game didn’t disappoint.

Floating around in space is a colony with four power gems. Aliens attack, and the entire colony is blown to pieces except one starship that managed to escape. The aliens take the gems and return to their planets, but that lone vessel goes on a quest to retake the gems and use them to find a way back to Earth.

…And that’s about the extent of Graceful Explosion Machine‘s story. Most levels have a wrap-around map where players can move far enough to the left that they’ll reappear on the right, and vice versa. Enemies spawn in random locations, and it’s up to the player to eliminate them as efficiently as possible. As long as enemies keep exploding, the combo multiplier keeps increasing, but wait too long and the combo resets to zero. The ship has a three-hit life bar and only three lives to complete three phases of each level. If all three lives are lost, players have to start back at the beginning of that level.

Mechanically, the weapon system is what makes GEM stand out. There are four weapons available – a basic blaster that overheats with continuous use, a laser that fires a straight beam across the screen, a sword that will hit anything within a 360 radius, and a launcher that shoots a barrage of homing missiles. The sword, laser, and missile launcher all use power from the ship’s reserves, whereas the blaster will overheat, but does not drain ship power. As such, players will have to switch between the ‘special’ weapons and the blaster to keep enemies exploding without running out of ammo. This resource management breathes new life into the shoot-’em-up genre, and kept me coming back for more. 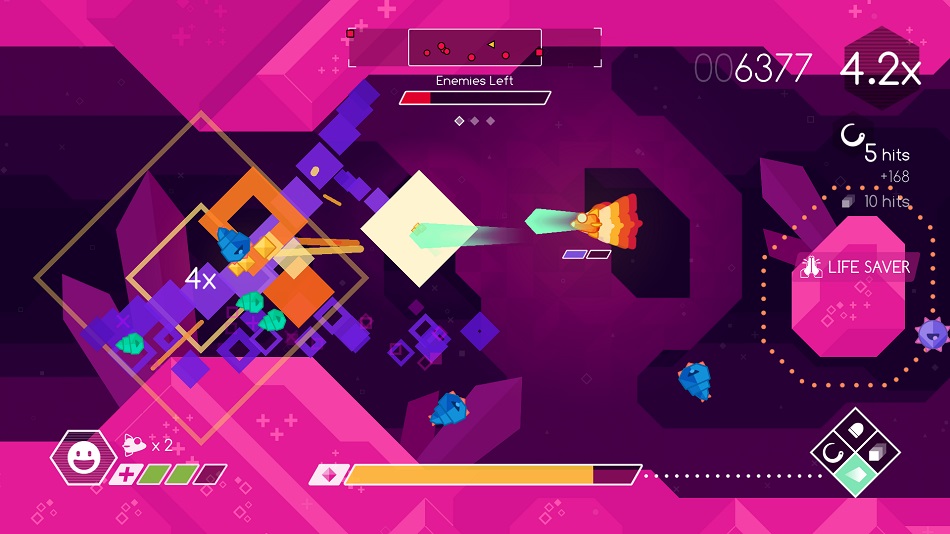 The enemies each have unique behaviors, giving them personality instead of just being a mindless horde, and of course, switching weapons is essential for dealing with them. For example, some have barriers which are taken care of by the laser, but that same laser has no effect on blue centipedes that charge the player directly. Some enemies will always charge straight at ship from all angles, making the sword essential for larger groups. Others move quickly out of range of the blaster or laser, which makes homing missiles the best choice.

Graphically, GEM stands out from other shooters thanks to its candy-colored explosions and simple geometric aesthetic and emotion the character expresses — a smile emoji will pop up when a health pickup is gained, or a thumbs up icon will appear each time the combo multiplier increases.  Many games in the genre try to keep a more serious tone while Graceful Explosion Machine wants to keep players in a bright and happy place, and it was appreciated.

Each level in Graceful Explosion Machine can last anywhere from five to ten minutes, and with death only stopping play for a few moments, it’s easy to have an hour disappear while playing. However, while levels are short, they get repetitive quickly, and despite the various enemy types, there just aren’t enough of them. Players will see most of what GEM has to offer in the first half of the campaign, meaning that the second half is a bit bereft of surprises. Also, the missiles are noticeably more powerful than the other weapons, and tend to overshadow the others as they go largely unused except in specific situations.

Overall, Graceful Explosion Machine is an amusing rainbow of geometric bombast, suffering slightly from repetitive gameplay. However, it hits the spot for those who want to turn off their brains, enjoy some colorful chaos and rack up a huge combo, and there’s certainly nothing wrong with that. Rating: 7 out of 10

Disclosure: This game is developed and published by VertexPop. This game is currently available on PS4, Nintendo Switch, and Steam. This copy was obtained via publisher and reviewed on the PS4. Around 6 hours of play was devoted to single player, and the game was completed. There is no multiplayer content.

Parents: According to the ESRB, this game is rated E and contains Mild Fantasy Violence. Honestly, it’s a triangle shooting orbs, other triangles, and circles with eyes. This is about as kid-friendly as I can imagine.

Deaf and Hard of Hearing: There is no text in the game, but it plays slightly better with sound in order to hear when the combo drops and when health items appear. This isn’t game breaking, but useful to have.

Colorblind Modes: This game has no colorblind mode.