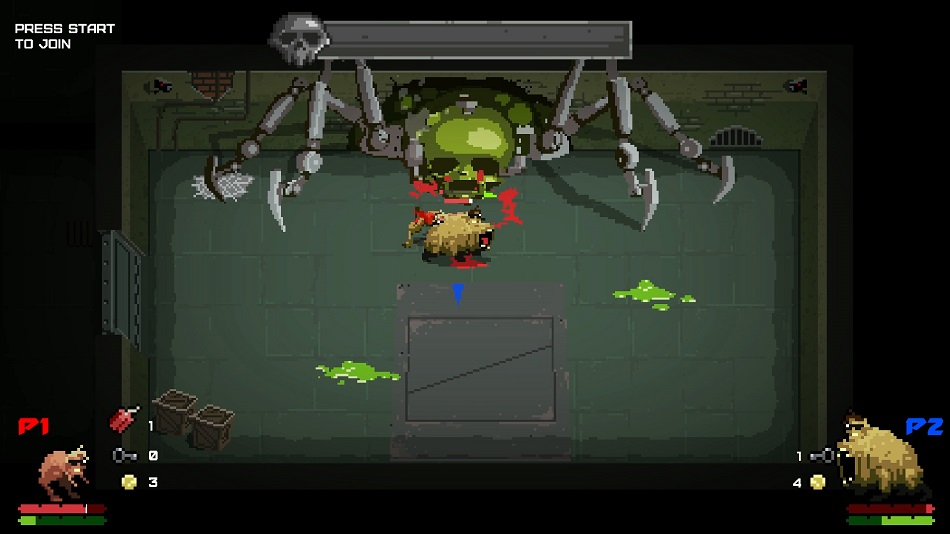 High Quirky roguelike action that mutates the dungeon and the player.

Low So many bugs — and the insect enemies are pretty bad too.

WTF Lemme get this straight… I’m doing this for my dog?

I enjoy procedural generation in games. It keeps things fresh and keeps me on my toes by preventing me from memorizing a dungeon’s layout, not to mention the luck involved in finding items and power-ups. Unfortunately, for a title like Freaky Awesome that focuses on mutating and changing things in every room, it strangely lacks variety when it comes to the levels. But, let me back up a moment…

Freaky Awesome is a top-down roguelike that has players infiltrating a nuclear waste facility to rescue a dog, and yes, that’s the entire story. Inside, players will find deadly traps to avoid and dangerous creatures to fight. They’ll also collect items to defend themselves and restore health. Coins can be collected to buy items during a run, and DNA strands found will unlock power-ups for future runs.

So far it seems pretty standard for the genre, but the big draw in Freaky Awesome is the mutagen. Mutagen drops from all enemies and some items. While it heals the player, it will eventually cause the player to mutate as well. With each mutation, players will have to adapt to a new way of fighting and moving throughout each new level. For example, Chicken has short range and a quick dodge, Grub has ranged attacks but moves slowly and has more health, and Oil can shoot from a distance and leaves slicks that can be set on fire to damage enemies.

While these mutations seem like they would give the game serious legs, the randomness only really applies to the character. The levels will change with each run, but there isn’t much diversity to the rooms within them. I often came across the same room multiple times in a dungeon, sometimes not back to back. Worse than the repetition is that the game’s rules aren’t set to prevent roadblocks. For instance, I’d sometimes come across a floor that had mostly locked doors and not enough keys to see all of the dungeon. 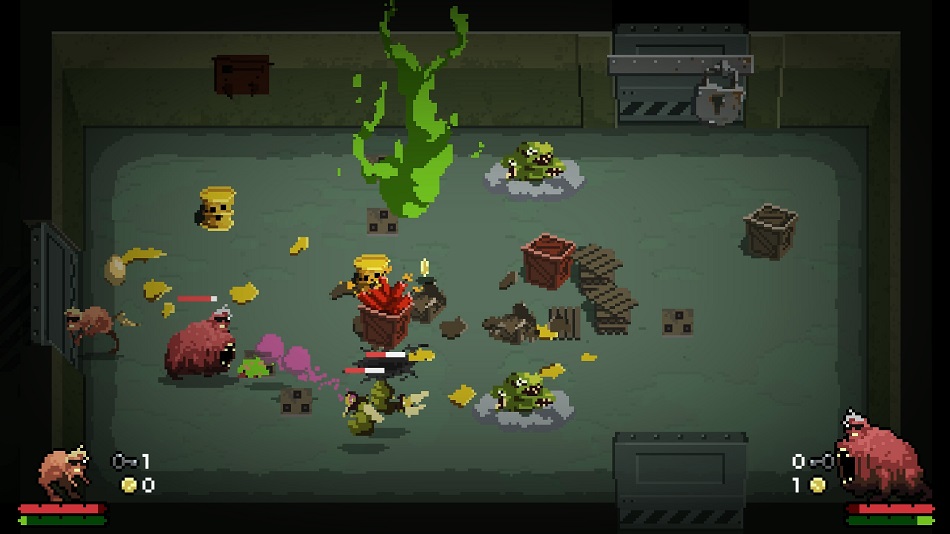 There are also a few technical issues that hurt the game, and spike pits are a big one — players can carefully watch harmful pop-up spikes retract go into the floor and try to step over them safely, only to be immediately hit when crossing. Another issue is that I have issues with how the permanent skills are laid out.

The skill tree shows the progression paths that players can spend DNA on to unlock benefits like health regeneration, higher move speed, or causing more items to spawn. Players can also unlock slots to have more than one ability turned on at a time. The problem is that the ability track takes precedence over the skill tree, and there were multiple times when I was unable to even look at a skill on the tree because of the ability above it.

A technical issue I had was that the game’s page on the Steam store says that it can be played multiplayer, both local and online. However, this isn’t really the case. Local multiplayer doesn’t seem to function at all, and the game has such a small online community that there’s effectively no one to jump in with.

Despite the problems, Freaky Awesome has potential. It’s unusual to make players rethink their combat strategy and even movement methods every few, hectic minutes, and the concepts are solid. Sadly, the depth of the procedural generation is sorely lacking and the mutation options aren’t as broad as they need to be. Overall, it feels like it’s only halfway to what its proper final state needs to be — hopefully the devs will pump some more mutagen into it and let it develop. Rating: 3 out of 10

Disclosures: This game is developed and published by Mandragora. This game is currently available on PC. This copy of the game was provided by the publisher and reviewed on PC. Approximately 10 hours of play were devoted to single player mode, and the game was not completed. No time was spent in Multiplayer modes due to inactive online environment and non-functioning local co-op.

Parents: This game is currently not rated. There is combat, and some creatures will explode in a pile of green goo. Sometimes there will be a spurt of blood from creatures when they are low on health. Aside from that, this game is good for anyone who doesn’t mind a little creature violence with pixels for gore. It’s a pretty tame game.

Deaf & Hard of Hearing Gamers: There doesn’t seem to be any dialogue at all, so nothing is missed for having the sound off, and there are no significant auditory cues.

Colorblind Modes: There are no colorblind modes for this game.