All That Glitters Is… Mad 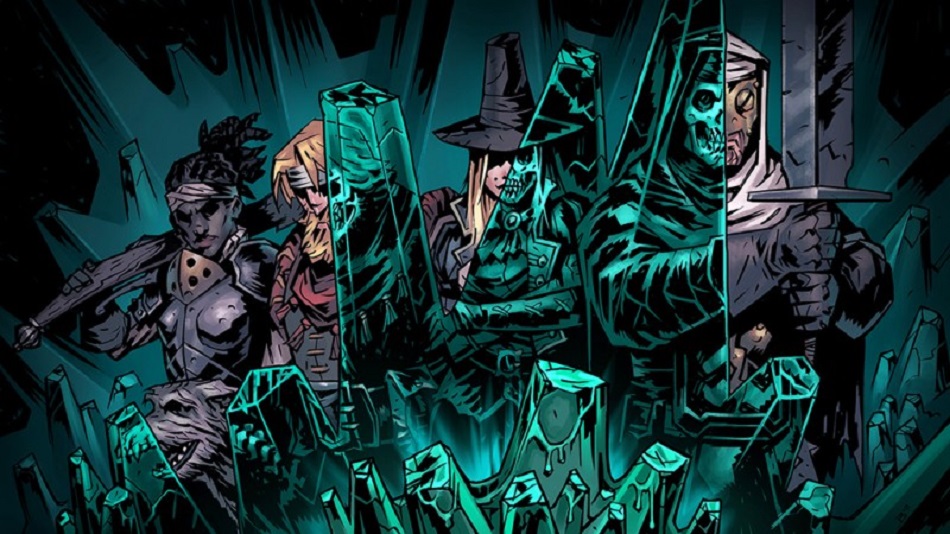 LOW The new trinkets aren’t always worth their price.

WTF Why is this big rock so hard to find on this farm?

Darkest Dungeon: The Color of Madness is the latest DLC addition to Red Hook’s wildly successful roguelike RPG. This add-on brings a new area for players to explore, new items to use, new districts to build, and a new mission type — Endless.

Instead of delving into caves or forgotten ruins, Madness focuses on a comet that’s crashed into a nearby farmstead. Strange glowing shards have started appearing, and the locals have become husks — essentially, slaves to the shards. The player is tasked with exploring the farmstead to find the source of the shards and returning the farm to its normal state.

After the first couple of missions, the farmstead reveals the endless quest called “The Harvest”. Players gear up to go in and survive for as long as possible, collecting comet shards (used as a new type of currency) as they struggle on. This takes Darkest Dungeon’s themes of endurance against terrifying creatures and cranks the difficulty — instead of making it to the end, it’s about how quickly players can cull the endless horde of enemies, and for how long.

As players progress, new heroes start coming to the farmstead. These “Shard Mercenaries” are the best trained and have the best equipment, but will only participate in The Harvest.  Players can use them in the fight, but these heroes take a part of any comet shards that are earned. 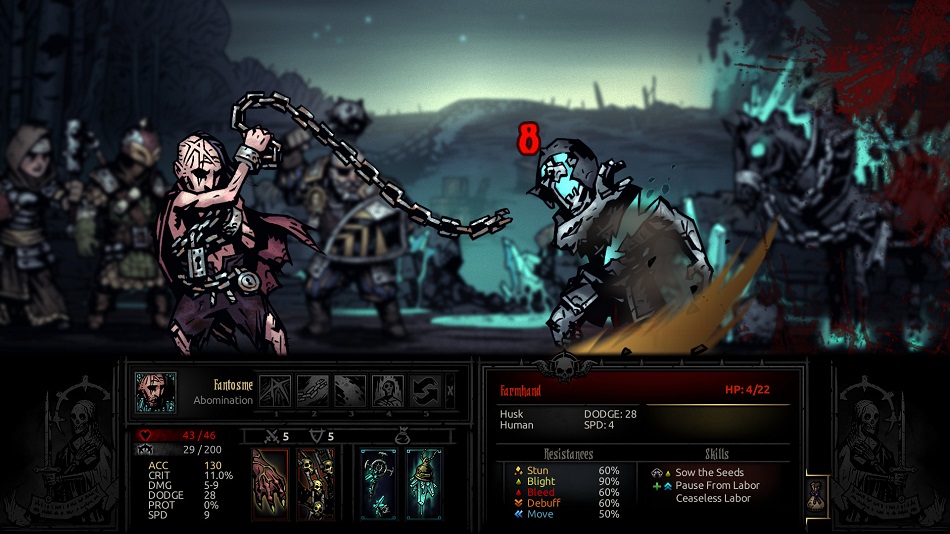 Another interesting twist to the Harvest missions is that adventurers don’t die. When a character is defeated, they will be “lost to space and time” for the span of one or two quests, but will eventually be spat back out in the main hub. This is a great move that means players can beef up their team members without fear of losing them permanently (a very real danger in the main campaign) and keep all of the comet shards earned along the way.

Red Hook has also added a new resource called Shard Dust. This substance gives a  temporary boost to speed and damage for one fight, but also comes with extra stress and a hefty debuff to becoming virtuous for the rest of the quest. However, adventurers don’t have to use the dust, so it becomes a key option (in a game already filled with them) about balancing the pros and cons of its use.

The new trinkets in Madness can be powerful, but also too expensive and too specific to be worth the trouble. The main problem is that the cheapest trinkets cost 25 shards, and they aren’t the easiest things in the world to get — and the best ones? Around 200 shards. They all come with a downside so they fit right in with the rest of the game, but overall I was underwhelmed.

Taking a wider view of the content, the game as a whole has gone through some major balance changes that are also thematically appropriate. For instance, whenever a player scores a critical hit they do more damage as normal, but now they also earn a small buff unique to each character class. Characters who become Virtuous (kind of a super-powered status) can lose the bonus if they accrue too much stress.

The Color of Madness is another welcome addition to Red Hook’s tough-as-nails Lovecraftian horror RPG, and in contrast to the way the previous DLC,The Crimson Court, was implemented, this new content is mostly self-contained and doesn’t bleed out into the main campaign — a plus for newcomers who aren’t ready for it. While the add-ons in other titles can often feel superfluous or like a grab for cash, The Color of Madness delivers a strongly-realized idea that improves the core content while also adding to it. Rating: 8 out of 10

Disclosures: This game is developed and published by Red Hook Studios. This DLC is currently available on PC, but the game itself is available on PC, PS4, XBO, Vita and Switch. This DLC was obtained via publisher and reviewed on PC. Approximately 10 hours were spent in the new DLC, and the content was not completed in the sense that there were certain bosses that I did not see while in The Harvest. There are no multiplayer modes.

Parents: According to the ESRB, this game is rated T and contains Violence, Blood and Gore, Suggestive Themes, Partial Nudity, Alcohol References, and Mild Language. Similar to content in the core game, there is one female character that is topless for 1-2 seconds at a time. There are slight flashes of blood with most attacks, and the game is fairly violent. Be warned that it’s not a kid friendly game.

Deaf & Hard of Hearing Gamers: The game is fully accessible. Captions can be placed at the top or bottom of the screen. The text size can not be modified. 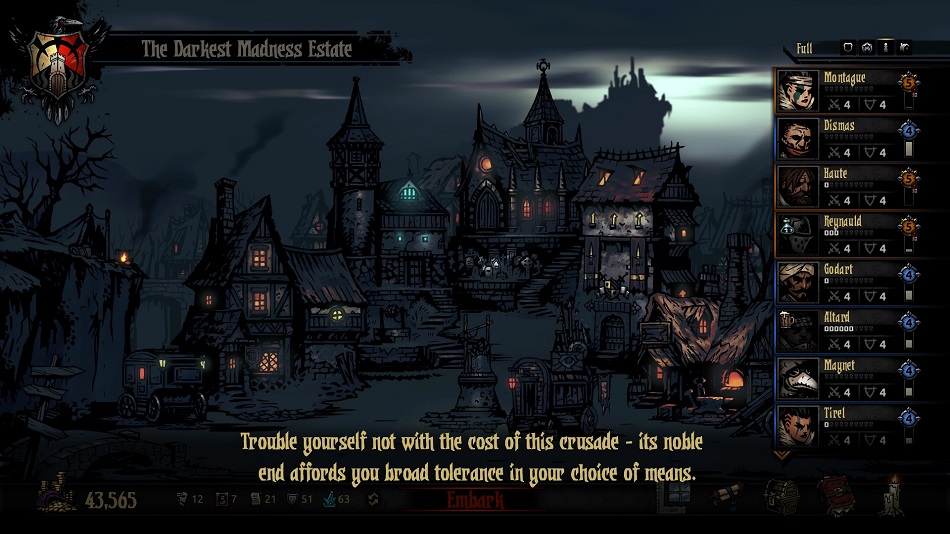 Remappable Controls: The game offers remappable controls, and can be played with keyboard and mouse or controller. 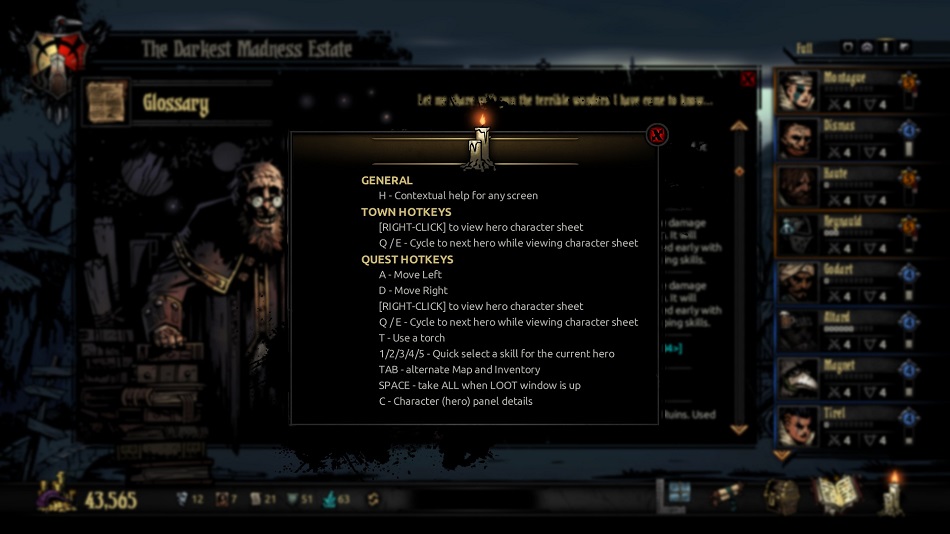