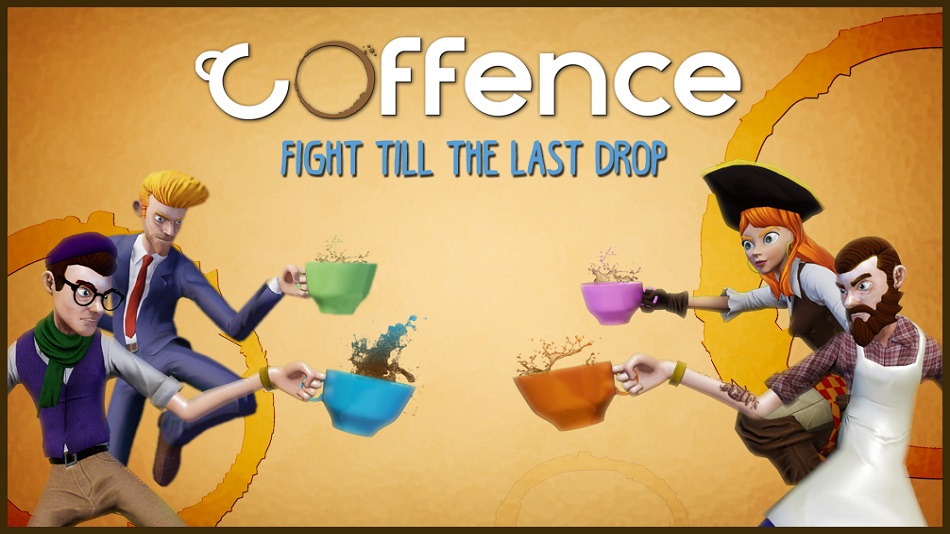 For some adults, coffee is the lifeblood elixir that gets them through the day. In Coffence from Sweet Bandit Studios, this couldn’t be more true as coffee is the life — literally —  of each character. This is a fighting game where players attempt to hit the other’s coffee cup until it’s emptied. It can be played as a duel between two players, or up to a four-player free-for-all.

Combat utilizes a rock-paper-scissors style, and there are three key combat moves — Attack (melee or ranged), Spin, or Block. An attack will beat a spin move, spin moves get through blocks, and blocks will… er… block any attack move. Players also have a dash or a slide they can use to maneuver around their opponent to attack at a different angle. The last move is a coffee break where players can drink some of their brew and sacrifice a point of health to slow time for all opponents. When a player hits an opponent’s coffee cup, a precious drop will fly into the air and anyone can grab it to add to their life total. The last person standing with coffee in their receptacle is the winner.

Interestingly, the characters are only different aesthetically, and have no discernable difference in playstyle. However, the coffee cups that players choose is where some differences appear, ranging from the small but speedy long-range espresso cup, all the way to the slow-moving carafe that holds more liquid. 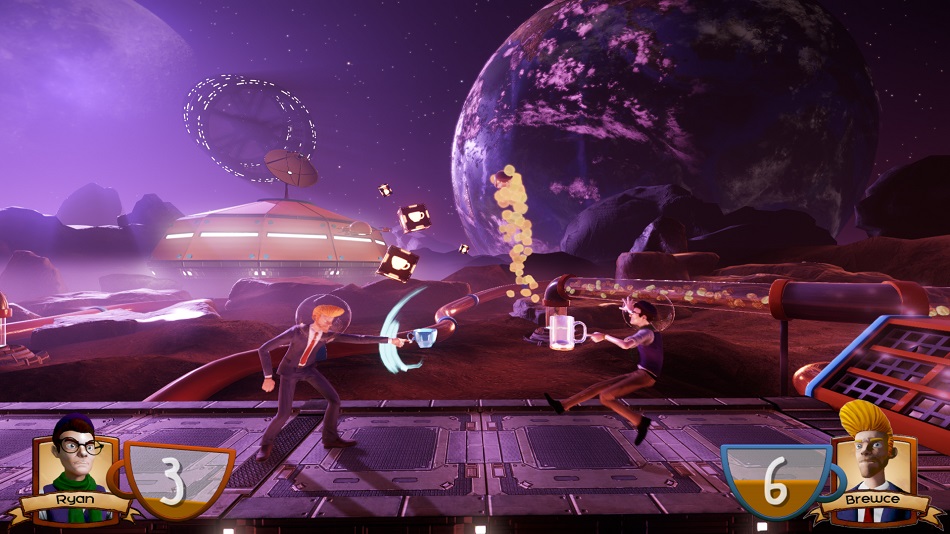 While a great idea, Coffence is currently still in Early Access and has a few issues to work out before release.

At the moment the controls are not remappable, which causes some of the quick-move options to be hard to utilize. Additionally, aiming ranged attacks feels too loose, and it’s tough to confidently grab flying coffee drops or attack with anything but a straight shot forward. On coffee breaks, it seems as though when one person activates the slow-time effect, there’s no way to counter it. If another player attempts to activate a second coffee break, they waste the life but don’t get the benefits. The build I played also has a couple of bugs that required me to restart the game.

Along with balance and control changes, the developers promise more characters, additional mug options, and new modes (both online and local) to give players more to do. While this sounds great, one area where the game could really benefit would be adding characters that aren’t just more white men.

All in all, these issues are just growing pains for a game that’s still in Early Access, and it’s looking great — right now, it’s got nowhere to go but up.