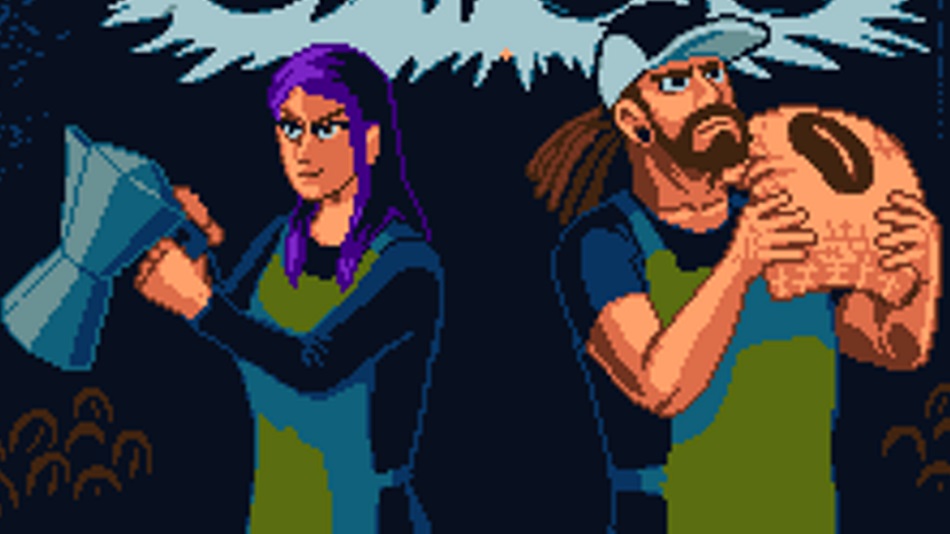 Low All the visual effects.

WTF How does someone “remove the metal” from a person?

I don’t normally associate coffee with heavy metal. Most of the coffee shops I know are more about house music and calming lighting. However, in Mega Cat Studio’s Coffee Crisis, heavy metal is the only real music there is. It’s also one of the three resources Smurglian invaders want from Earth, along with coffee and free wifi. It’s up to Nick and Ashley, the only baristas metal enough to fight, to stop the Smurglian empire. Yes, the story is absurd, and the developers run with it.

Coffee Crisis is a beat-’em-up brawler where two players can fight together against the Smurglian menace. They’ll also battle against senior citizens, “heavy metal jesus” characters in t-shirts and long hair, and country music fans – all weak-minded humans who fall under Smurglian control. 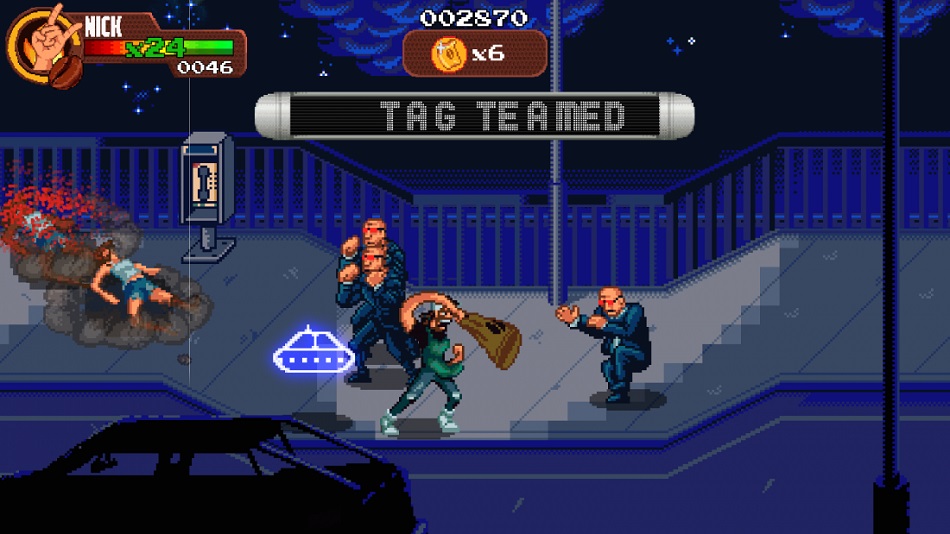 Combat for Coffee Crisis is front and center. Players will be able to jump, grab, and strike, as well as utilize a unique special move. Ashley is the faster character with a quick uppercut as her special, while Nick is more of a tank character who can spin around to knock any enemies that are close. Throughout the levels, players will also be able to pick up items like a crowbar or a guitar to use in combat.

A special quirk of Coffee Crisis is that power-ups can change the game’s visuals in addition to giving players a free boost. For example, a cup of demon coffee makes attacks hit harder, and espresso gives temporary invincibility. On top of these tweaks, the screen might change to make it look like an old tube TV, or everything might look like it’s concept art drawn on graph paper.

The game also has an option for modifiers — things that change how the game plays from run to run. A random modifier will trigger anytime a player enters a battle screen. While power-ups only affect the player in a good way, modifiers can affect the player (or enemies) in both positive and negative ways. They can be as simple as a speed boost or as complex as “Rain of Bats”, where winged mammals streak across the screen and drop bombs. 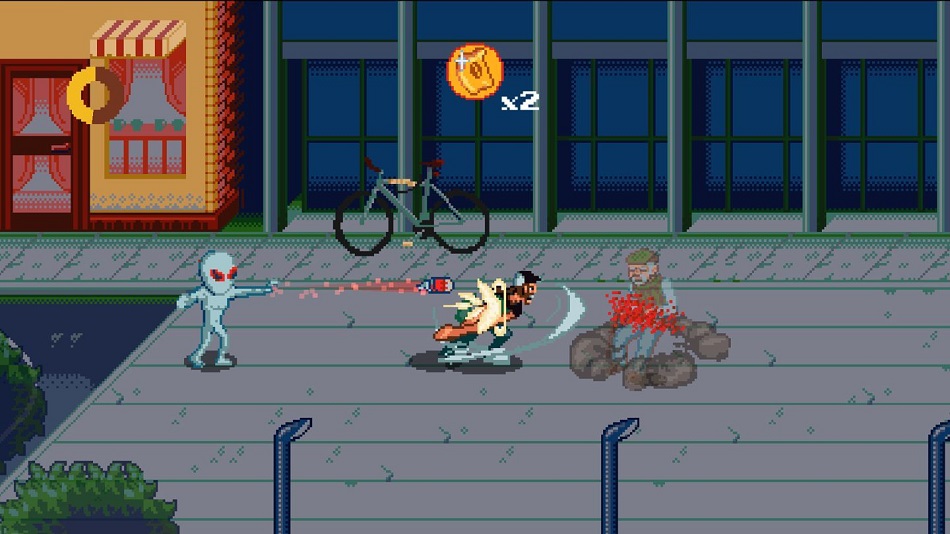 Unfortunately, this special quirk is where a problem lies… the visual side of these effects are more often a burden than a boon, making the game hard to see or even actively painful to look at. Worse. The modifiers aren’t always clear on who they’re affecting while they make noise onscreen, amplifying the readability issues. As for combat, there’s a significant disconnect between when the player hits a button to jump or attack and when the character actually does the action.

The devs also don’t do their work any favors with its introduction fight. Players get thrown in without being told how to fight. It’s not until the second level where Coffee Crisis gives a quick overview of the controls as a character narrates the story. For a game that’s fairly difficult on the normal setting, it’s a sin to hold basic info back when starting.

Brawlers aren’t the most complex genre, so the fundamental mistakes of visual noise and sluggish controls mean that it’s difficult to recommend Coffee Crisis to even for the most dedicated brawler game fans. Rating: 3.5 out of 10

Disclosures: This game is developed by Mega Cat Studios and published by Mega Cat Studios and Zerouno Games. It is currently available on  Steam and Nintendo Switch. This game was obtained via publisher and reviewed on Switch. Approximately 6 hours were spent in single player mode, and the game was completed. No time was spent in multiplayer mode.

Parents: According to the ESRB, this game is rated T and contains Violence and Blood. It’s hard to see any blood that does appear, as the pixel graphics make it hard to tell. The game is a brawler, and players are beating up senior citizens. Still, teenage audiences would be fine for this game.

Deaf & Hard of Hearing Gamers:  All text in the game is done through text boxes, but none of the text boxes are resizable. No audio cues are necessary for play. 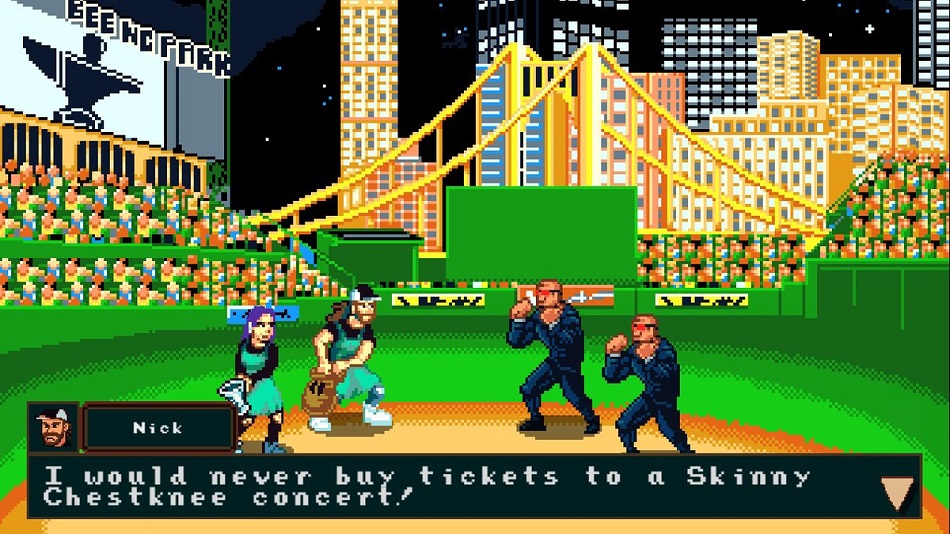 Remappable Controls:  Controls are not remappable. 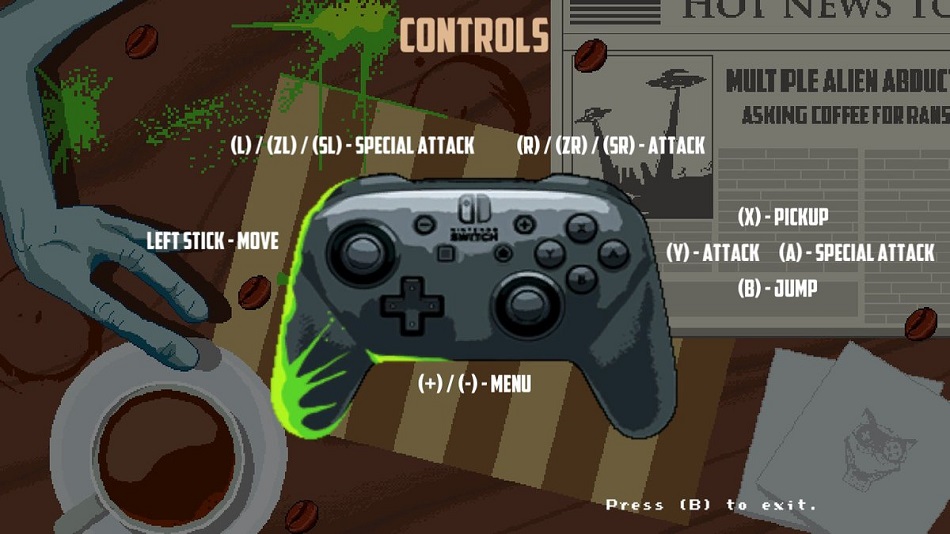