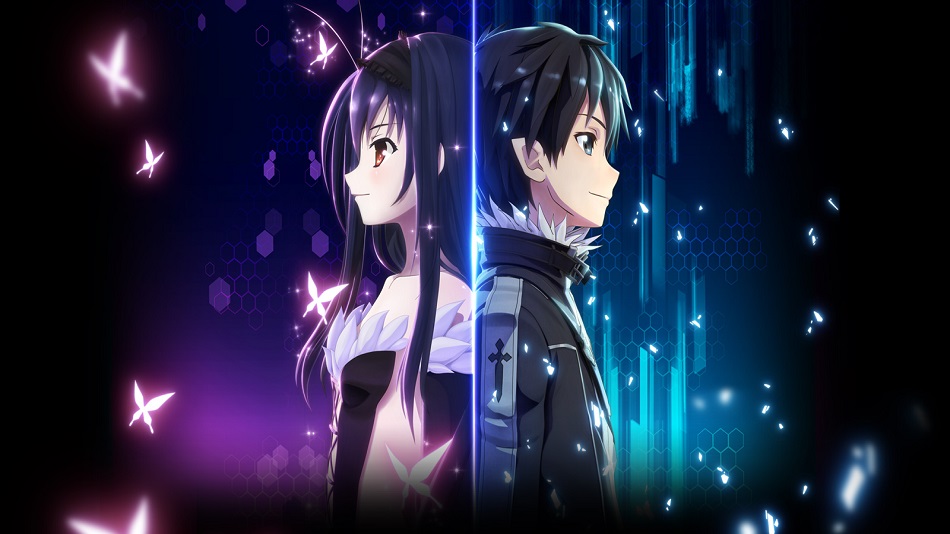 High A new story for fans of both series.

Accel World and Sword Art Online (SAO) are two anime series created by Reki Kawahara focused on people playing videogames that affect players in the real world. Full disclosure: I had not seen or read any of either series before playing this game, but looked into both further after the first couple of hours. Even with that in mind, I don’t know if a fan of the series would enjoy this game any more than I did.

AWvSAO is an action-RPG featuring real-time combat as the characters explore different worlds. Three characters can be taken at a time, and each world is rather large, but not exciting or interesting enough to inspire exploration. Each area has roaming monster groups that can be attacked for experience to level party members, and dungeons that promise fearsome foes and rare treasure.

It seems promising enough, probably doubly so for fans, but AWvSAO suffers from an identity crisis, caught between being an action game and an MMO. Despite what the combat would suggest, the menus are reminiscent of an MMO and bog things down due to poor controller mapping, not to mention a failure to demonstrate chat emotes that halted my story progression in one instance. Waypoints to guide players are also inconsistently implemented.

The combat in AWvSAO doesn’t help clarify its identity. Characters have a basic and strong attack, and can equip unique skills based on their weapon. Holding down R1 or R2 brings up skill commands utilizing the attack buttons and directional pad. Skills mapped to standard attacks are fine, but skills mapped to the d-pad are too awkward to utilize comfortably. The repetitive combat only emphasizes this awkwardness. Accel World characters also suffer by not having the wings that SAO characters have, limiting their vertical fighting and exploration. This imbalance made me want to avoid Accel World characters beyond the first couple of missions.

The story here isn’t necessarily bad, but feels like they combined these two worlds just because they could. The Accel World characters are here because they were curious about a dark cloud in the sky, while the SAO characters just want to rescue a friend. The rest of the story features this mixed group exploring dungeons to find bosses with multiple health bars. (I mention these bars because other than this feature, there’s not a lot of difference between the bosses monsters and the overworld monsters.)

Multiplayer is unlocked around chapter 5, at which point I was able to hop into a group and take on more challenging one-shot missions or duel other players. Unfortunately, meeting up with others highlights a lack of balancing — on my own, the missions were too tough for me, but grouping with others let them carry me. The prize? A weapon that let me one-shot every enemy for two-thirds of the solo campaign. Overall, the multiplayer here feels like a minimal implementation and took the enjoyment out of the game for me instead of adding to it.

Accel World and Sword Art Online fulfills its function as an action-RPG, but suffers from repetitive combat, confusing controls, and lackluster story. After my time with it, I have no intention of ever going back to it, and I question whether fans of either series would glean much enjoyment out of this mishmash. Rating: 5 out of 10

Disclosure: This game is developed by Studio ArtDink, and published by Bandai Namco Entertainment. This game is currently available on PS4 and Vita. This copy was obtained via publisher and reviewed on the PS4. Around 12 hours of play was devoted to single player, and the game was completed. About 1 hour was devoted to the multiplayer.

Parents: According to the ESRB, this game is rated T and contains Partial Nudity, Fantasy Violence, Suggestive themes, and Language. This is typical JRPG stuff. There’s no blood or gore, just characters are using weapons like swords and axes, and the enemies shatter into digital data like glass. Character outfits may be skimpy for some, but that’s about the extent of the “nudity” for the game. I don’t remember any character specifically cursing with any type of regularity. I believe sh*t and as*hole are heard, but nothing more serious or offensive than that.

Deaf and Hard of Hearing: All text is subtitled since the voice actors are the original Japanese voices, and there are no auditory ques.

Colorblind Modes: This game has no colorblind mode.

Sword Art Online has a better plot story than Accel World and hot waifus. It seems like SAO is more popular than AW