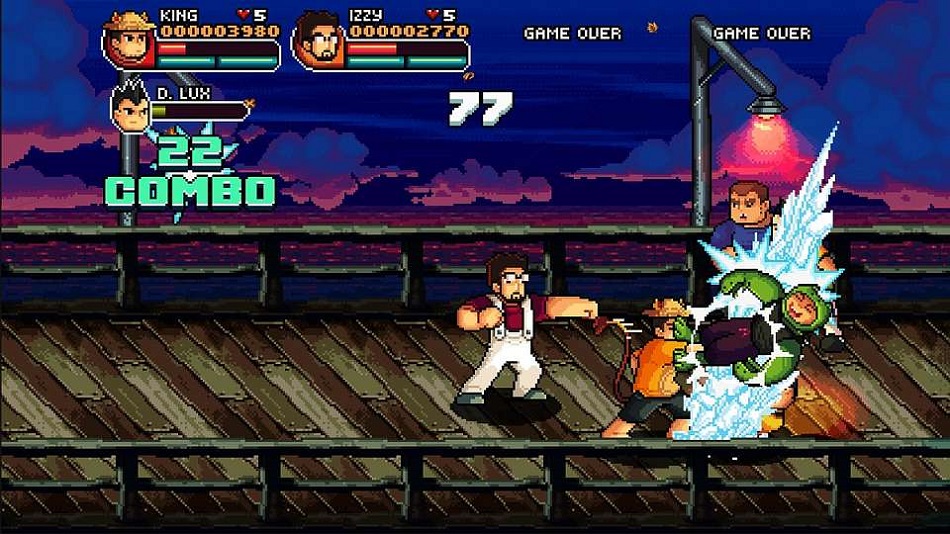 High Classic beat-’em-up action with up to three friends.

Low The games it’s referencing are better than this one.

WTF Why is a man in leather drinking rainbows out of a barrel?

There are plenty of videogame tropes out there that most players know very well. For example, if there’s an empty room with a save point and a health pack, there’s probably a boss right around the corner. If a creature looks the same as another one except that it’s a different color, it’s probably deadlier and tougher. 99 is generally the max amount of lives in games that keep track of them. The developers of 99Vidas know these tropes just as well as everyone else, and they combine them all into one campaign filled with beat-’em-up action.

Essentially, 99Vidas is a tribute to famous titles of the ’80s and ’90s like Final Fight and Double Dragon. A mystical artifact is said to grant the wielder 99 lives to live. Four warriors with elemental powers must guard it with their lives. If the artifact falls into the wrong hands, it could mean doom for the world. Of course the artifact gets stolen and it’s up to the warriors to take it back.

99Vidas can be played with up to four players in online or local co-op. There are six characters to choose from, and another five to unlock. The game is broken up into six levels with two additional bonus levels. As players complete each level, they’ll have points to spend on unlocking or upgrading abilities. Lives are also available to purchase, and if the team runs out of lives, it’s game over. Fortunately, there’s a save between each level, making it easy to jump right back in for another try.

The graphics in 99Vidas celebrate the 8- and 16-bit eras, and there’s have a fantastic chiptune soundtrack to match the aesthetic. However, despite the audiovisual appeal, the game has a number of issues. 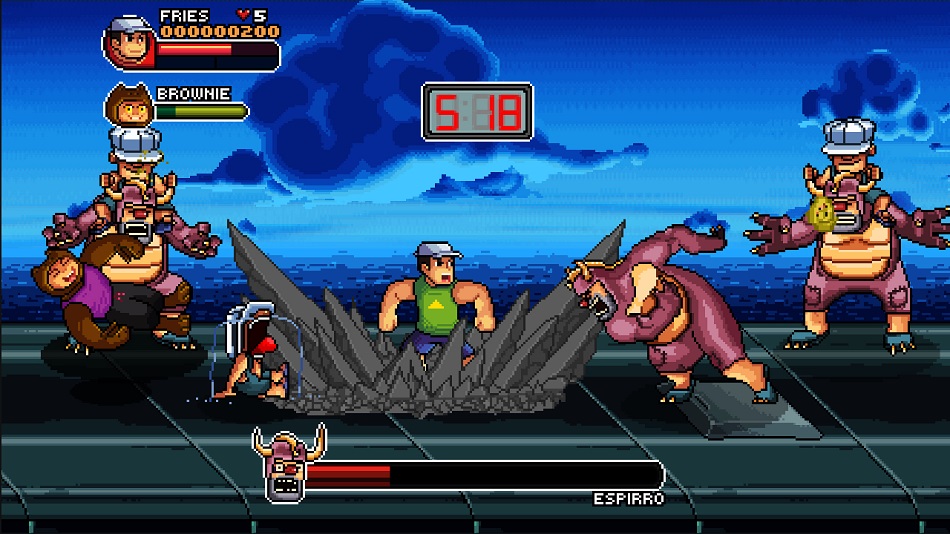 For starters, player characters move only slightly faster than walking enemies, and not nearly fast enough to get out of the way when enemies charge. Unlike others in the genre, 99Vidas doesn’t offer any rapid movement option — no dodge roll or dash. Not even a block. A team of four might have significant difficulty with the campaign on the normal setting, and solo players will likely fare even worse.

Another odd omission is that beat-’em-ups generally offer a button (or combination of buttons) to throw enemies. 99Vidas forgoes this traditional design and instead forces players to walk directly to enemies in order to to automatically pick them up. Unfortunately, enemies can stunlock players in combos if they get too close, which makes throwing more dangerous than it’s worth. The only way to break out of a combo is to use a ‘desperation’ move, but performing it hurts the player, so the damage is done regardless.

On the plus side, the PlayStation consoles do have cross-save compatibility, allowing players to take their saves with them on the Vita or to move them between consoles as necessary. Sadly, the Vita doesn’t seem to have the greatest support. Even after multiple re-installs, my Vita would freeze like clockwork on every game over, forcing me to close the game completely and relaunch. The loading times on the Vita are also rather long, which hurts this as a portable title.

The high difficulty curve and unbalanced enemy vs player interaction in addition to all of its issues make it hard to recommend 99Vidas to even the most enthusiastic beat-’em-up fan. This title tries to stay afloat on nostalgia for old favorites in the genre, but not only does it miss the target, it makes errors that this genre learned to avoid long ago. Rating: 3 out of 10

Disclosures: This game is developed and published by QUByte Interactive. It is currently available on PC, PS4, PS3, and Vita consoles. This copy of the game was obtained via publisher and reviewed on the PS4 and Vita. Approximately 8 hours of play were devoted to the single-player mode, and the game was completed. 1 hour of play was spent in multiplayer modes.

Parents: According to the ESRB, this game is rated E, but does contain Violence. What’s here is par for the course for beat’em up games, and the violence isn’t bloody or gruesome. No swearing or risque images here, just a really difficult game.

Deaf & Hard of Hearing Gamers: All of the game story is given through text. There are no significant auditory cues.

Colorblind Modes: This game has no colorblind modes available.