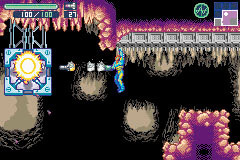 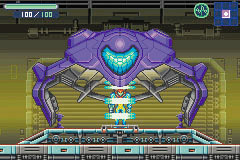 Big sister, little sister. In childhood they share the same household, learn from the same parents, have many of the same life experiences, and often even look similar. But ultimately each must grow up and become an independent person. In many cases, this is more difficult for the "smaller" sibling. Instead of forging her own life path, she is often forced to tread down one already well travelled and broken in by the big sister. With hand-me-down clothes, used textbooks, and always being relegated to bottom half of the bunk bed, it can be hard to emerge from the shadow and be recognized as an individual.

Fusion and Prime are siblings: games that were released together as the two heirs of the Metroid legacy. The big sister is the GameCube's Metroid Prime, a 3D juggernaut that had been in development since the era of the Nintendo 64, and was consequently one of the most rabidly anticipated games ever. Then there is Metroid Fusion, a little sister title for the Game Boy Advance (GBA), Nintendo's portable handheld system.

Like a younger sibling, Nintendo's Game Boy has often been treated as simply a vehicle for the hand-me-downs and leftovers of other consoles. The Game Boy Advance in particular is developing a rather dubious reputation of being a haven for the re-release of unaltered ports of old Super Nintendo games and gutted "remakes" of popular titles. I feared Metroid Fusion would be unable to escape this "little sister" mentality. Was Metroid Fusion designed to be nothing more than a pale portable 2D imitation of its 3D big sister—a few extra hours of Metroid atmosphere and a means to unlock a nifty blue Fusion Suit for the GameCube Samus?

The answer, thankfully, is a resounding no. As the game boots up, the title screen proudly proclaims "Metroid 4." Not Metroid Fusion, not Metroid Advance, but Metroid 4. This is a game not afraid to acknowledge its position as the heir to a legacy. It would be easier, as the younger sister, to shy away from the pressure of being the fourth title in such a much-respected and much-loved series, but Metroid Fusion shows right from the beginning that it is up to the challenge.

Always a pressing concern with sequels is whether the "feel" of the originals will be captured again in the new release. Metroid Fusion is close enough in style to the Super Nintendo classic so as not to feel jarring. The controls are very similar to other Metroid games, and Samus retains a host of special abilities such as missiles and bombs, the jump ball, speed booster and various beams. Developers have dealt with the GBA's button configuration limitations quite well, and have even added a couple of extra moves for Samus: she can now grab onto ledges and pull herself up onto them, and climb certain walls.

However, even though the feel of previous titles remains intact in Metroid Fusion, the open-ended atmosphere is severely compromised thanks to a much more rigidly structured plot. While investigating a planet surface, Samus is attacked by a mysterious parasite known only as ""X," which fuses itself to her nervous system. After making a recovery thanks to a vaccination of Metroid DNA, Samus is sent to the space station orbiting the planet to stop samples of the X virus that have escaped there. During the operation to save Samus' life, portions of her suit had to be surgically removed, which gives her a sleek new "blue" look as well as provides a convenient explanation as to why she begins the game with none of her special abilities. 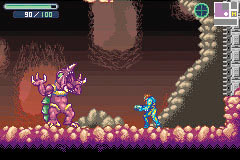 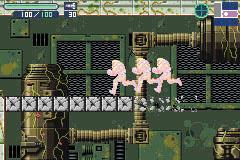 So instead of roaming around on a planet, Samus is confined to a space station, and the resulting atmosphere is more than a little claustrophobic. Most of the fun (although some would argue most of the frustration) about earlier titles was the solitary, trial and error method of solving the game that came from being dumped in the middle of a situation with no guidance and being expected to find a way to something important through exploration and discovery. In Metroid Fusion, Samus is no longer the only character in the game. She works very closely with, and is in a very real sense controlled by, the space station's main computer system. This computer tells her exactly where to go next; thus Metroid Fusion becomes a game based on the completion of smaller, self-contained missions rather than an open-ended adventure.

It's extremely hard for me, as someone who has played Super Metroid, to judge this new "dumbed down" system without bias. Perhaps it is unfair to judge a sequel based on its predecessors, so I tried to imagine what my feelings toward this new system would have been had Metroid Fusion been my first introduction to the series. I came to the conclusion that I would still have found fault with it. It's not that I dislike mission-based games, but I did resent the level of control that the computer exerted over my gameplay experience. The biggest issue I had was with the doors that would mysteriously fuse shut or cease to function and block my access to previously travelled paths, all in an attempt by the computer to literally shepherd me along a certain route to the next boss or item. Once I had communicated with the computer, as Samus needs to do periodically to receive new mission information, the doors would open again and I would be granted permission to enter different areas of the station.

I chafed hard against these restrictions, not only because I found it a rather transparent artifice of game design meant to limit access to certain areas, but also and more importantly because revisiting already-travelled ground has always been a staple of Metroid games, and as well any other games that were based on a similar engine (Castlevania: Circle Of The Moon is the game that comes immediately to mind.) Discovering hidden items was a staple of Super Metroid; that energy tank buried in the wall or missile upgrade in the tiny chamber underneath the floor that could only be found by going over every inch of the environment with a fine tooth comb. What I found baffling about Metroid Fusion was that although the hidden items did still exist, going back to find them later on was limited by the fact that entire areas of the space station would be closed off at certain times until Samus had completed a particular mission.

Under these conditions it's hard, therefore, not to feel a little like a sheep. The omniscient computer-shepherd doles out new power-ups when he sees fit and herds Samus to safer pastures to protect her from the lingering wolves. The "wolf" in this case is actually very real, and comes in the form of a highly advanced X parasite that has taken on Samus' form and actively hunts her throughout much of the game. Thus, Metroid Fusion borrows a few techniques from the Survival-Horror genre. The false Samus has a disconcerting habit of showing up out of nowhere and simply opening fire, an event that is accompanied by a suitably hectic change of music that elevates the tension level very effectively. While this sent a shiver up my spine more than once, I discovered upon replaying the game that these encounters, like everything else in Metroid Fusion, are all orchestrated to occur at specific points in the adventure and are therefore as linear as the rest of the plot.

The linearity of Metroid Fusion was definitely a disappointment, but not something to write it off for by any means. The game is certainly eager to please and comes with all the subtleties of craftsmanship that raise it well above mediocrity. In terms of simple gameplay mechanics, control, boss-battles and overall design effort, it is top notch. Metroid Fusion is able to stand on its own as a worthy sequel to the previous games in the series and is a solid addition to any GBA collection, thereby proving its legitimacy outside of the influence of Metroid Prime. Despite managing to avoid the most obvious traps of the younger sibling relationship, however, Metroid Fusion is still at heart a little sister, and always will be for one reason: it is simply nothing revolutionary. Perhaps certain things should best be left to big-sister Prime after all. Rating: 8.0/10.

Parents have little to worry about with Metroid Fusion. Sex, drugs and profanity are not an issue, and while much of the game revolves around shooting various life forms, the targets are always malevolent aliens, and the deaths are not graphic or exploitative.

Fans of the Metroid series will likely find Metroid Fusion to be a mixed bag. The Metroid atmosphere and controls are intact, but the open-ended exploratory nature of the first three games has been replaced by rigidly controlled missions.

Casual gamers should get a kick out of Metroid Fusion because it's a well-crafted game with beautiful graphics and an in-game "chaperone" to prevent the player from getting lost. It can easily be completed in under six hours.

Female gamers will appreciate the amount of personality that Samus Aran demonstrates in this game. For the first time, she actually communicates and shares her feelings with the gamer, demonstrating that she is an assertive and level-headed heroine. Samus has certainly come a long way from her green-haired, bathing-suit wearing beginnings.

Deaf and Hard of Hearing gamers will not have any problems. No puzzles are audio-based, and the plot is presented entirely as text.