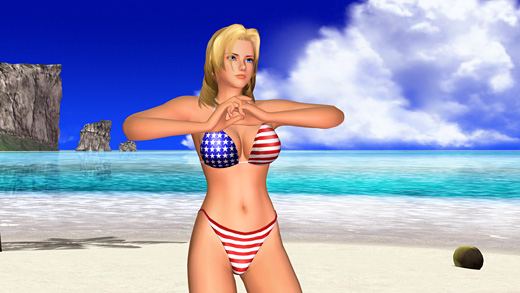 Fans of semi-nude women (and who isn't?) will be in Heaven.

This is the line in Brad's review that seems to sum up the appeal of Dead Or Alive: Xtreme Beach Volleyball. At least to men. Speaking as a (straight) female, I can say that I'm not particularly interested in ogling semi-nude women. Given that the game has been marketed from the very beginning as having the kind of girls that could fulfill any man's fantasies (oh, and some volleyball too or something), I wasn't expecting anything of interest for the female gamer—this in itself says something about the industry that is profoundly disappointing.

But more about that later. As fruitless as it may be, let's consider for a moment what a girl sitting down with this game would find. Superficially at least, the game would appear to shows some promise. After all, girls are supposed to like playing with dolls, right? Xtreme Beach Volleyball gives us eight doll-like beauties not unlike Barbies or Fashion Pollies, and hundreds of different bathing suits and accessories to dress them up in. Each exquisite body seems to be a clone of the next, except for the different hairstyles. All share the same small noses, large eyes, dainty pointed chins, and that implausible physique that combines thin limbs and tiny waists with generously ample breasts.

Barbie is plastic, and the Dead Or Alive girls are pixels, but their forms both demonstrate the same insidious cultural assumptions about beauty that are virtually unattainable in the "real world." The one major difference between the two is, of course, that the Dead Or Alive girls don't go driving or babysitting in their fancy threads. They stretch suggestively, straddle tree branches, roll around on the ground and hop up and down.

It is with this over-the-top sexual suggestiveness that the game loses me. Volleyball, item-hoarding and the cultivation of relationships have all been done better elsewhere; it's obvious, to me at least, that the game is really about none of these things. It's all about dressing girls up in skimpy outfits and giving them some shallow volleyball game as an excuse to get them into interesting poses that can be zoomed in on from all angles using the controller's camera function. If the game were truly about volleyball, or even about forming relationships, then there would not be random screens of the girls walking up and down beaches or lying down in poses that make them appear, as a friend so aptly put it, "freshly raped."

I'm not against having beautiful women in videogames—even impossibly beautiful women. What I take offense to is the voyeuristic nature of Xtreme Beach Volleyball, and the fact that the game is such a painfully obvious flimsy framework held together by nothing more than these girls and their bodies. The message that Xtreme Beach Volleyball sends to female gamers is loud and clear: this game is not meant for you.

How often have we hear the phrases "you like those easy girly games," or "you play like a girl?" It is through games like Xtreme Beach Volleyball that statements like these continue to bear weight as insults. It doesn't seem to matter how many inroads female gamers make into the genre, because for every Roberta Williams there is some game that comes out where the ultimate goal is to fit the microscopic "Venus Bikini" onto some chick, and then zoom the camera over her pixelated breasts while she tries to balance on a floating pool-cushion. Rating: 3.5/10.

Ya know, when I first heard about this game I was sure it was a joke. In fact I’m still waiting for the punchline…