Space? Where? All I've Seen is this Ugly Planet 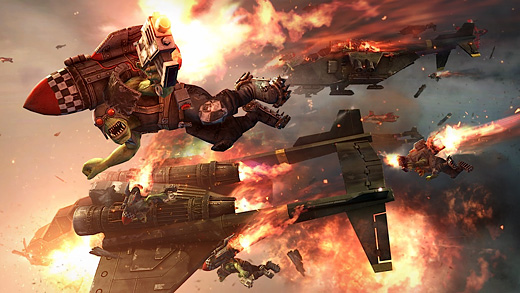 HIGH Combining the jetpack and war hammer for devastating results.

LOW The overwhelming sense of boredom that came over me when there was still six hours of game left.

WTF Does anyone honestly think that that giant armor looks cool?

The third-person shooter genre is one that I look at as having wasted much of its potential. When compared to first-person shooters, they're actually open to many possibilities gameplay-wise that FPSs struggle with. Things like platforming and melee combat are much more possible with a camera that lets the player see all the environment surrounding them, not just what the character can see. Instead, the genre has clung to the cover-based shooting mechanics that have been driven into the ground this generation. Warhammer 40,000: Space Marine

immediately appealed to me with its lack of a cover system and emphasis on melee combat. Unfortunately, not much else appealed to me about this game.

Players take control of Captain Titus, the leader of the Ultramarines. He and his crew are sent to a planet being invaded by orks, a race of aliens in the Warhammer universe. Contrary to what the title lead me to believe, the game never goes to space. It all takes place on this factory-like planet that's being flooded with orks. The Ultramarines must kill orks and reach some sort of psychic weapon to wipe them all out at once. That, right there, is the entire plot of the game. Other than one incredibly predictable plot twist two hours before the end, absolutely nothing changes in goal, tone, or character development for the entire eight hour journey.

Warhammer 40,000 Space Marine will most likely be the first game in the series to be played by people such as myself who don't like real-time strategy games. It trades its previous genre for a mix of shooting and slashing. Both the guns and the melee weapons have a fair amount of variety and are adequately balanced. Even with the variety of ways to kill orks, the lack of variety in terms of objectives allowed boredom to seep in. Even the best gameplay in the world loses its luster if not changed up enough, and Space Marine has far from the best gameplay.

Many of the complaints I have with this game are reflected in Sparky's review. The world is an ugly, crate-filled blob, and the gameplay loses steam well before the end. The difference seems to be that I was much more affected by these issues. Space Marine dulled quickly for me and never recovered.

Slashing through orks is the only objective players ever have in this game, and there aren't very many types of orks to begin with. Every kind of ork can be tied directly to an enemy in Gears of War, including the typical humanoid ork that you fight most often, (Drones) the slightly bigger ork that angrily rushes the player, (Beserker) and the giant ork boss that has multiple guns. (Brumak) It all feels uninspired, and only serves to further display Space Marine's lack of creativity.

Space Marine does get a few things right, however, and one of them is the jetpack. In addition to the expected high-flying abilities that jetpacks are known for, this one also allows Captain Titus to deliver a powerful shockwave landing attack that either kills or stuns everything nearby. It isn't used very often in the game, but it still stands as one of the few highlights.

After about three hours, the player will have seen just about everything there is to see in this game. The aforementioned plot twist does provide a whopping one new enemy type, but it's far from enough to make the game feel fresh. With the narrative being almost non-existent, my drive to finish the game dropped to nothing.

I don't think there's anything else to be said about Warhammer 40,000: Space Marine

. It's a dull, repetitive game with a shallow story and dull environments. I wanted to quit playing before I'd even hit the halfway point, and there was still several hours left. People satisfied with eight hours of mindless combat will certainly be entertained, but with all the strong titles coming this fall, Space Marine stands as a game that can be safely ignored. Rating: 3.0 out of 10.


Disclosures: This game was obtained via rental and reviewed on Xbox 360. Approximately 8 hours were devoted to the single-player (completed 1 time) and no time was spent on the multiplayer.

… but there is a reason for that. The conflict in this game takes place entirely on a forge world under assault. A Forge World is just that – a big factory built over the entire planet. The only people who live here are workers and some government overseers. This is why the whole planet seems industrial with crates all over it. True, the game could have explored more of the universe, but the mission of the Ultramarines is to protect Titan war machines from the invading Orks. This is one in MANY MANY conflicts the Ultramarines face. The Warhammer… Read more »

“It all feels uninspired, and only serves to further display Space Marine’s lack of creativity.”

Regardless of the rest of the points raised in the review, you seem to have insinuated that Space Marine has copied from Gears of War despite the 40k Universe having been around for decades.

Sp basically I’m not entirely sure what point you were trying to make before.

Even if we take this as a game with some design issues – mainly repetitive gameplay, which is clearly your chief complaint – it’s worth considering that 40k fans may be willing to overlook such issues for the lore and frantic gameplay, especially those (like yours truly) who have played the RTS games and wondered what it’d be like to slaughter Orcs up close and personal. Objectively, there’s nothing wrong with the game from a technical standpoint. The mechanics are very fluid and responsive, and the combat accomplishes exactly what it set out to. There are virtually no bugs to… Read more »

Bad review. “Does anyone honestly think that that giant armor looks cool?” This is a bad start right away, which is a healthy slap in the face for fans of the Warhammer 40.000 tabletop series. You generally seem to ignore that Space Marine doesn’t exist in a vacuum (pun not intended), but is part of a series that spawned in 1987, thus predates Gears of War by quite a bit. This is an important thing to note since you slam it for copying GoW, while it actually takes all the enemy types from it’s own, long-established universe. That’s not to… Read more »

Not to contradict or disagree with your points, but the fans of the lore will be drawn into the multiplayer.. which unfortunately is similarly clunky and shallow. 40k fans are constantly being suckered into these games that promises to be the game they’ve always wanted, but has never been delivered. All the fans ever asked for is a literal translation of the tabletop game into a video game – that’s been it. Instead, developers have used the 40k lore as a means to make the game they’d wanted to make, changing cosmetic details and whatever minutiae they’d need to in… Read more »