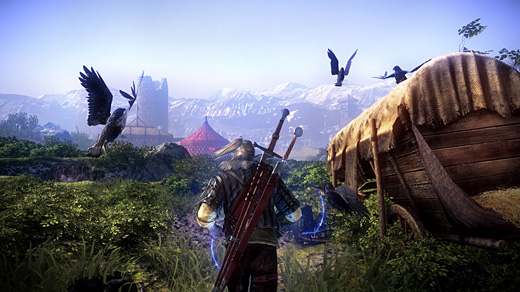 When The Witcher 2: Assassins of Kings first graced PCs in May of last year, many of us exclusive to console games were left more than a little envious. After being hailed by critics for its smart storytelling, complicated combat system and excellent presentation, it was impossible not to clamor for the Xbox 360 port that has arrived nearly a year later. While a simple port would've been sufficient, CD Projekt RED has shown a desire to outdo what was already great with the Enhanced Edition

. In addition to what was already patched for the PC version, it has been loaded with all sorts of new areas, characters, and cut-scenes. By making such precise tweaks coupled with large-scale additions, this new and improved version of The Witcher 2: Assassins of Kings has proven to be worth every minute of the eleven month wait.

Perhaps one of the best things that can be said about The Witcher 2 is the fact that the plot can't be summed in one or two sentences without cutting some serious corners. Geralt of Rivia is a witcher, a mutated human who has both the knowledge and combat skills to battle almost any type of monster and defeat it. Recognizing his power, aristocrats and kings have enlisted him for protection during times of political upheaval and war. Beyond that, the depth of the story, particularly the motivations of the characters, goes far beyond what I've come to expect from video game storytelling.

The factor of the story that best fuels The Witcher 2's excellence is undoubtedly the characters. While this usually means I found them to be likeable, the people I met in this game go far beyond that. They're possibly the most believable characters in any game I've ever played, regardless of whether or not they were on the side of Geralt.

Many Western role-playing games (RPGs) make the mistake of having character interactions be almost exclusively one-on-one between him/her and the main character, never forming an overall group dynamic. In Mass Effect 2, for example, I felt that while Shepard got to know all of the characters, the characters never got to know each other. As strange as it may seem, some of the most important moments in The Witcher 2 are ones where Geralt is relaxing in a tavern with his friends, old and new, watching the colorful cast's interactions with each other. It takes a certain type of craftsmanship to make a mutated human and a group of dwarves getting drunk in an inn actually seem realistic, but CD Projekt RED has done it. 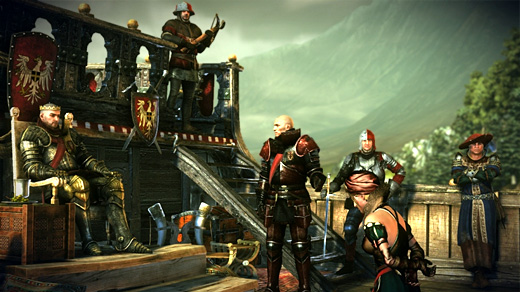 Beyond these subtle moments, the key to The Witcher 2's excellent characterization is its mastery of gray morality. There are no real villains in this game, nor are there any real heroes. There's no generic evil force to battle like in Dragon Age: Origins or The Elder Scrolls IV: Oblivion, meaning that the conflicts in the plot are much more political and realistic. Every major character in the game can be on Geralt's side at one point or another, which is a testament to how relatable their motivations are. It didn't matter if the character in question was the leader of an elven terrorist group, a power-hungry king who casually talks about raping women, or a drunk troll that charges people to cross a bridge that doesn't even exist, they all exude enough humanity to make me at least somewhat interested in helping them. The emotional impact these characters had on me never reached the level of a game like Lost Odyssey, but in terms of making the characters feel like real people, The Witcher 2 excels. BioWare talked a lot about gray morality and understandable villains in Dragon Age II, but CD Projekt RED has shown them how it's done.

The way this game made me care about so many different characters fits perfectly with another thing The Witcher 2 does brilliantly: letting the player make decisions with major consequences. This isn't like Mass Effect 3, where decisions don't really amount to much later on. Instead, at the end of the first act, the game says to the player, "Things are getting really serious, really fast. Pick a side. Now." The degree to which my first two playthroughs differed is incredible, with the second act taking place in entirely different locations and meeting a ton of different characters. While I wouldn't say it's required, anyone who doesn't do a second playthrough of The Witcher 2 is going to miss out on an entire game's worth of great writing, characters, and combat scenarios.

Combat in The Witcher 2 is composed of three pillars: swordsmanship, magic, and alchemy. Swordsmanship is my favorite due to how fluid the sword combat feels, allowing Geralt to switch targets on the fly and redirect his flurries accordingly. The magic complements the swordplay, letting the player quickly pull off a spell for making shields, throwing fire, or creating shockwaves, to name a few. Alchemy is the pillar I used the least, although I've talked to some people who swear it has the best skill tree in the game. It improves how well Geralt throws bombs and knives, sets traps, and creates potions.

The combat can be very challenging and unforgiving, which will certainly turn off some people who aren't used to games that push back so much. Fortunately, I'm not one of those people, which is why I took on the game's mightiest foes with masochistic glee. The combat is skill-based, allowing anyone willing to learn the mechanics the ability to handle any battle. Since players can save anywhere outside of combat, death doesn't usually lead to replaying a lot of content like in Dark Souls. 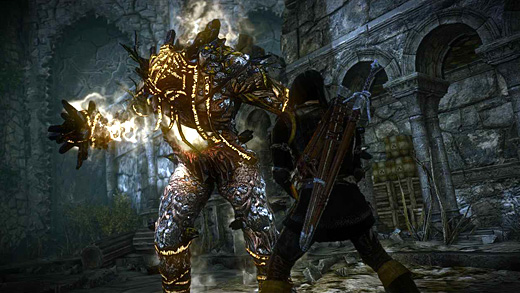 The Witcher 2 is one of those rare games that has little interest in pandering to those who struggle, and has no response to those asking for a reprieve from a challenging fight other than "Stop whining and deal with it." This may not be the approach I'd like every game to take, but with the continuing trend of games sacrificing the need for skill and strategy in order to reach the biggest audience, it's refreshing to play a game that knows exactly what it is. Even when playing on the highest difficulty, (which is called "Dark", for some reason) I found the combat mechanics more than capable of getting me through the most brutal battles.

It's obvious at this point that there are a lot of things about this game that Mike and I both like. One opinion we don't share, however, is about how the game ended. He mentioned a lot of exposition at the end, but even after three playthroughs I still had to check out a YouTube video to figure out what he was talking about. To me, it made perfect sense that the character Geralt talks to at the end would have all this knowledge, and so trickling it out sooner would've felt more forced. Getting these answers regarding Geralt's mysterious past made the ending feel rewarding and conclusive. Besides that, most of the dialogue with the final character is additional detail that the player doesn't need to understand the story. It's there for people who want everything clearly explained, but those who jump straight into the fight with this character should still get what's happening in the plot. This might just be a difference of taste with storytelling, but I thought the gravity of the final conversation served the game well.

Flaws with gameplay are miniscule, but still bothersome.

There are a couple times where the player takes control of a character other than Geralt, which could've been a cool change of pace if the execution was less poor. These characters feel stiff and lack Geralt's magic abilities, doing away with what made the combat so great. Targeting outside of combat can be incredibly finicky, to the point that I'd be standing directly in front of a person I wanted to talk to and instead would be stuck targeting a nearby barrel. Finally, there was a boss in the second act that didn't allow me to save right before starting the fight, so I'd have to redo a difficult fight with several enemies as one of the aforementioned stiff alternate characters every time I died to the boss. It's a surprising oversight, since the other boss fights all auto-saved right before starting. These complaints aren't egregious, but still worth mentioning.

After observing the complaints of the PC version, CD Projekt RED has crafted one of the smartest, toughest, and flat-out best RPGs of this generation with the excellent The Witcher 2: Assassins of Kings Enhanced Edition

. It succeeds at telling a mature, complex story without worrying about confusing anyone not paying attention, while the skillful, varied, and challenging combat serves to make the gameplay some of the most rewarding in the genre. All of this 2012's upcoming RPGs should be worried, as The Witcher 2 is a tough act to follow. Rating: 8.5 out of 10.


Disclosures: This game was obtained via retail purchase and reviewed on the Xbox 360. Approximately 70 hours were put into the game, and it was completed three times. There is no multiplayer.

Deaf and Hard of Hearing: All dialogue lines are subtitled, although one issue is that the subtitles for ambient lines appear over the NPC's heads rather than at the bottom of the screen, so they can be easy to overlook. That being said, all important dialogue lines are clearly subtitled where you can see it.

Stopped halfway through for fear of spoilers. Will purchase on Steam after my return to New Vegas. I trust your taste!

Thanks Pedro, glad you liked it.

Although I’m no fan of The Witcher 2, I enjoyed this article, and the broad comparisons with all the other ‘best of class’ RPGs. CD Projekt are doing a lot of the right things, and hopefully they continue improving like they did between W1 and W2.

This was a good read.