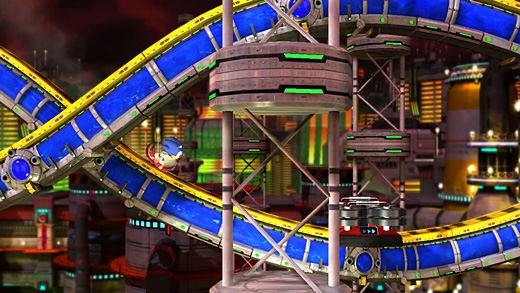 WTF Who's the genius that thought leaving out Launch Base Zone was a good idea?

I have a lot of respect for Sega. They have absolutely no shame in displaying every one of Sonic's missteps, regardless of how poorly received they may have been. Sonic Generations

is no exception, featuring loads of fanfare for lovers of every major title in the franchise. While paying homage to the more polarizing games in the series may sound strange, what Sonic Generations does right is acknowledge these mistakes while spinning them in a positive light through the implementation of design that's actually functional. Sega's dedication to this series seems to be paying off, as the hedgehog finally seems to know what he's doing.

Bordering on nonexistent, the story in Generations is incredibly simplistic and only serves to spur the gameplay: Dr. Eggman is causing different timelines to overlap each other, resulting in both Genesis-era Sonic and modern Sonic being twin stars of the show. This also means levels from throughout the series show up with new designs and updated visuals. It's a silly way to set up the game, but it serves its purpose for a title that's not about plot as much as it is about gameplay.

On paper, Sonic Generations should be exactly what I want from a Sonic game—Classic Sonic is absolutely timeless, and I could play Sonic 2 for the rest of my life and still not have found every secret area or shortcut. It has the best level design of any 2D platformer I've played. Modern Sonic? It's got some some of the lowest low points a franchise can have, but in recent years the green-eyed hedgehog has shown a great deal of improvement, particularly in Sonic Unleashed and Sonic Colors. Since Sonic Generations combines all these elements, my expectations were high. Does it live up to that hype? Yes and no.

Things start off strong. Both Sonics show off their unique gameplay styles with some of the best design and controls the series has had in the post-Genesis days. Classic Sonic sticks to sidescrolling, while modern Sonic switches between 2D and 3D perspectives with a large dose of speed added to the mix. Running through the beautiful new Chemical Plant Zone brought about the wave of nostalgia I was expecting ever since the game was announced. Even without the nostalgia factor, the game still works as a strong platformer in its own right.

As I continued playing, my opinion of the game took several hits. The first was the sparse, unfunny cut-scenes. Gameplay may be the prime concern in Sonic games, but Sonic Colors showed that clever dialogue can find a way into the formula. Sonic Generations's writing is disappointingly weak, which is surprising given how many jokes could've been made about a series that's had such ridiculous plots. It's not a huge loss, but mixing up fun gameplay with consistent, well-written cut-scenes certainly couldn't have hurt.

The second red flag was the boss fights, or lack thereof. Considering that every level in Sonic Generations represents an entire game from the series, it would make sense to have a boss fight after each one. Instead, there's a mere four boss battles, some of which are strange picks. Why is Egg Dragoon (a sub-boss from Sonic Unleashed) representative of the entire modern era of Sonic? The fights themselves are functional but forgettable, and I can't think of a good reason to not have a boss fight after each level.

What's especially shocking about the boss fights is how bad the last one is. It feels rushed, with weak music, dull graphics, and a completely uninspired structure. This isn't helped by Sonic's friends yelling at Sonic to be careful after literally every single one of the boss's attacks. It feels very anti-climactic, and certainly not fitting as the culmination of the series's 20-year history.

While these flaws hurt the experience, Sonic Generations suffers most from how little content it has. For all the excitement made about the original Sonic's gameplay returning, there's a mere nine levels with the old-school hedgehog, half the number found in Sonic the Hedgehog 2. The modern Sonic helps make up for this, but even after earning every achievement in the game, (no small task) I couldn't help but feel that a major opportunity had been missed with Sonic Generations. This game was built up as a celebration of Sonic's legacy, but instead, players only get a small slice of it.

is five hours of fun. The gameplay has more excitement than most other games I've played this year, and it sets a template that future Sonic games will hopefully pay attention to—it's just a shame that Sonic Generations, like Sonic himself, goes by very, very fast. Rating: 7.0 out of 10.


Disclosures: This game was obtained via retail and reviewed on the Xbox 360. Approximately 15 hours were devoted to single-player modes. (completed 1 time) There is no multiplayer.

Parents: This game is rated E for Everyone by the ESRB for mild cartoon violence. It's a kids game, with no more violence than a Saturday morning cartoon. Parents have nothing to fear.

Deaf & Hard of Hearing: The only issue I can think of as far as sound cues go is the beeping to indicate Sonic is running out of air while underwater. When the panic music starts, there will be an on-screen countdown, but before that comes several beeps to indicate that that's coming. Fortunately, only two levels have water, so this shouldn't be a big issue.