Experience has Taught Me to Investigate Anything That Glows 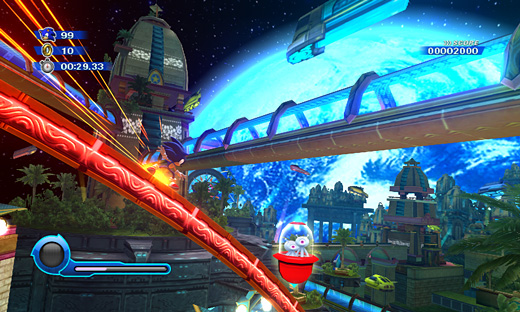 WTF Why is Sonic's mouth on the side of his face?

I know this is going to be incredibly difficult to believe, but Dr. Eggman… is up to no good. If that wasn't shocking enough, then listen to this: this is a Sonic game worth playing with more than two dimensions. So to anyone who's been completely dismissing everything the hedgehog stars in for the past nine years, I submit now as the time to return to the series.

Anyone who played the Xbox 360 or PS3 version of Sonic Unleashed will be familiar with this style of Sonic game: the high-speed on-rails sections where Sonic can only move left and right, the scripted setpiece moments that the player can't control, and the fluid transition between 2D and 3D gameplay. As someone who loved the Daytime stages in Unleashed, I was happy to see this formula expanded on. It properly expresses Sonic's specific brand of platforming, with a ton of loops, curves, and vertical movement. Sonic's controls still aren't perfect, however, particularly when it comes to the floaty jump. Maybe it's because this game takes place in space, but when comparing this Sonic to that of the momentum-based originals, Sonic Colors

Sonic feels as light as a feather. It's very strange considering how Sonic the Hedgehog 4 had the opposite problem, in that Sonic controlled with the grace of a boulder. Even so, this is the best Sonic has ever controlled in the third dimension.

Remember how the good Sonic games had power-ups? Remember how I said this is a good Sonic game? Sonic Colors proudly continues this trend in a big way, with some of the most enjoyable power-ups in any platformer I've played. The power-ups, which are brought on by different-colored wisps, can range from turning Sonic into a laser that can ricochet off walls to a pink spikeball that can attach to walls and ceilings. These work to mix up the gameplay and promote returning to previous stages to use new wisps to find new areas, without detracting from the game's core. There was rarely ever a moment where I saw a wisp in my path and got annoyed or disappointed. They serve more as game-changing rewards for getting that far into the level. They really couldn't have been implemented any better. 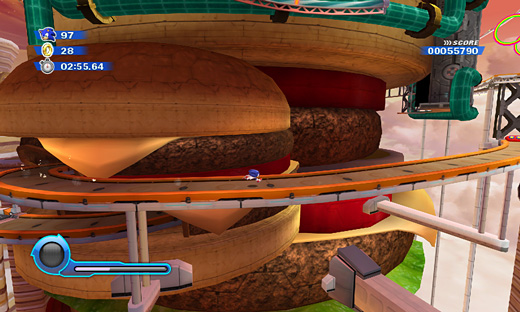 Comparing the plot of Sonic Colors to the plot of other 3D Sonic games is like comparing Kung Fu Panda to Atonement. Sonic doesn't get shot in the back and killed, (Sonic The Hedgehog 2006) transported to the Dark Ages by a witch trying to make herself immortal, (Sonic and the Black Knight) or turned into a werewolf with stretchy arms, (Sonic Unleashed) and there certainly isn't a human love interest who brings Sonic back to life by kissing his corpse. Best of all, Sonic's stupid, pointless, uninspired, game-ruining, poorly-voiced, completely unlikeable friends don't make appearances, with the forgivable exception of Tails. So now I can actually play as Sonic for the entirety of a Sonic game, something that has never happened in a 3D entry. (That's not a joke. This is the first 3D Sonic game where Sonic is the only playable character.) Sonic Team has gotten back to the original formula: Sonic versus Eggman. I wouldn't change that one bit.

With the stupidity of past plots behind it, Sonic Colors keeps it simple with Sonic running through an amusement park in space to save a race of aliens called wisps. This allows for Sonic to explore an impressive number of colorful levels. They all maintain an amusement park theme, from ferris wheel bosses to the least-safe roller coaster ever. This may make it sound like every level has the same visual feel, but there's enough spin on that theme in each level to justify it. The aquarium level is particularly refreshing, mainly because it displays that Sonic doesn't insta-drown when he touches water like he's done in his other recent 3D games.

Sonic Team seems to have finally caught on to how much everyone hates both the writing and voices of recent Sonic games, and has approached this problem with the purification strategy: get rid of all of them and replace them with people who don't suck at their jobs. The new voice cast consists of voice-acting veterans Roger Craig Smith (Resident Evil 5, Assassin's Creed II) and Kate Higgins, (the voice of Sakura in Naruto) both of which nail the voices. The new writers previously worked on MadWorld and Happy Tree Friends, and provide Sonic with one-liners that are actually funny, and not annoying. Sure, they're still cheesy, and some are downright cringe-inducing, but I'm not afraid to laugh at lines like "Come on, let's make like Eggman's hairline, and recede." Even though gameplay is what matters in a Sonic game, greatly improved presentation is appreciated, and Sonic Team deserves a round of applause for making cut-scenes in a Sonic game that are actually a joy to watch.

manages to bring out a more whimsical type of fun than I've come to expect from modern games. The series has largely returned to its roots, and the result is a game that is a joy to play in just about every aspect. Put good graphics, (especially for a Wii game) inventive platforming, fun power-ups, clever writing, and fantastic music onto a disc, and Sonic Colors is the result. Minor control issues, wimpy boss battles, and a length of only about six hours keep the game from reaching the levels of the Super Mario Galaxy games, but it still stands as one of the best third-party titles on a Nintendo console in recent memory. For anyone who has been looking for a reminder of why they ever liked this damn hedgehog in the first place but is tired of replaying the Genesis classics, it may be time to dust off the Wii. Rating: 8.0 out of 10.

Disclosures: This game was obtained via rental and reviewed on the Wii. It was completed with the Nintendo Gamecube controller. Approximately 7 hours of play was devoted to single-player modes (completed 1 time).

Parents: According to the ESRB, this game contains cartoon violence. It's basically the equivalent of a Saturday morning cartoon in terms of language and (lack of) violence.

Deaf & Hard of Hearing: The game provides subtitles that are automatically enabled when you start the game. This game should be quite accessible.

People complaining about Capcom giving up on Mega Man should look at Sonic the Hedgehog. Look how much time, effort and mistakes, Sega and Sonic Team had to go through to get a game that some people just like. I wonder how many non-diehard Sonic fans even looked up to see that a decent Sonic game was released.