Still Rollin' Around at the Speed of Sound 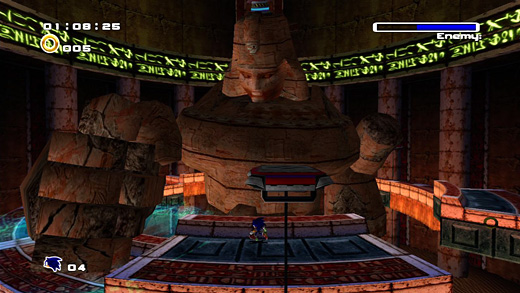 HIGH Final Rush is still one of the coolest video game levels ever made.

LOW Mad Space is still one of the most tedious video game levels ever made.

WTF How does the military mistake Shadow for Sonic? They're completely different colors.

After my Sonic Colors and Sonic Generations reviews, I'm sure it's clear that I have some fondness for certain 3D Sonic games. I don't deny the series took a large drop in quality when it switched away from its 2D platformer roots, eventually leading to one of the worst games ever made in the process (Sonic the Hedgehog 2006) but dismissing every 3D title as garbage is judging some genuinely good gaming too quickly.

The peak of the series's switch to 3D is, in my eyes, Sonic Adventure 2. While I never played the original 2001 Dreamcast version, it was re-released eight months later on the GameCube as Sonic Adventure 2: Battle. This introduced an already-popular franchise to a new audience, resulting in the best-selling third-party title on the GameCube. While I had some history with the series beforehand, Sonic Adventure 2: Battle was the game that made me a huge fan of the blue blur, and to this day, I still consider it one of my favorite games ever.

Many of the problems found in the first Sonic Adventure are nowhere to be found in the sequel. The pointless, confusing hub worlds have been dropped, and there aren't as many out-of-place peripheral play styles. Remember the original Sonic Adventure's mandatory fishing mini-game? It's gone here.

Sonic Adventure 2 has three primary gameplay styles that are alternate between during the campaign: one focuses on speed, one on mech shooting, and one on treasure hunting.Given that it's a Sonic game, it's unsurprising that the speed stages are the best, providing some of the most precise 3D platforming I've ever played.

Mech missions focus more on destroying enemies with lock-on homing shots. This makes for a lot of carnage, though it doesn't demand nearly as much skill as the speed levels. The weakest of the bunch are the treasure hunting missions, which start out fine but suffer from excessively large areas to search in the later stages. Despite a few bumps, the variety this 3-tier gameplay system provides more than succeeds at keeping the game fresh. It also helps that every one of the 31 levels has its own unique music, all as part of what I consider one of the best video game soundtracks.

Entertaining gameplay is the most important part of making a good platformer, but the biggest surprise of Sonic Adventure 2 HD is how good the story is. It's not something one would expect from a game about colorful rodents that run through loops, but the plot plays these aspects straight. While the same Sonic versus Dr. Eggman story at its core, the big change comes with Shadow the Hedgehog. His backstory is surprisingly dark given the fact that this is a game for kids, and makes his intense hatred of humanity somewhat understandable. It's far from being the deepest story out there, but I would take the ambition of this one over the rehashed, barebones plot of Mario games any day.

With its everything-but-the-kitchen-sink approach to gameplay and a surprisingly engaging story, it's easy to forget that Sonic Adventure 2 is over ten years old. Some of the bad design choices are more apparent now than they were when I was a kid, but the solid gameplay styles aren't terribly hurt by some of these rough edges. Now that this great title is available with high definition graphics, it's a great way for fans of 3D platformers to spend ten bucks. Rating: 9.0 out of 10.


Disclosures: This game was obtained via publisher and reviewed on the Xbox 360. Approximately 25 hours were put into both the story mode and replays of levels to achieve better ranks. (completed one time) No time was put into the multiplayer.

Parents: According to the ESRB, this game contains mild cartoon violence and mild lyrics. There are some surprisingly dark aspects to the story, and the ending is actually pretty sad in some ways. That said, I loved this game as a kid, and I don't think there's anything parents would find objectionable.

Deaf & Hard of Hearing: All lines in cut-scenes are subtitled, and the gameplay is always very straightforward. You shouldn't have any problems.